It’s been an exciting couple of weeks for us. For a start we’ve been in Liverpool, moored in Salthouse Dock, right next to the Tate, the Museum of Liverpool, the Maritime Museum and Museum of Slavery, the fantastically resurrected Albert Dock and with the huge Liverpool One shopping mall just over the road. We have said on many occasions that we’re not city people, and despite the grandiose of our arrival through the disused docks and the newly hewn canal link, it was with some trepidation that we tied up. We need not have worried; our pontoon mooring was excellent and we have been completely blown away by this city. It’s clean, it’s friendly, the architecture is amazing and typified by the cathedrals at each end of Hope Street; one old, one new, almost in each other’s shadows and on opposite sides of a religious divide but existing in perfect harmony. 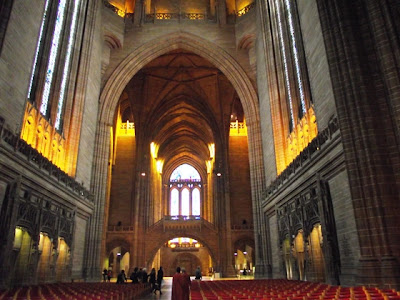 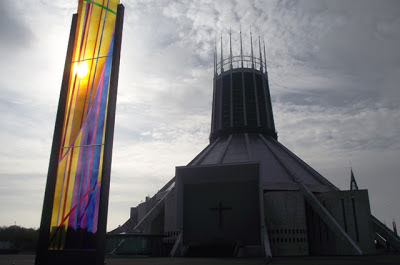 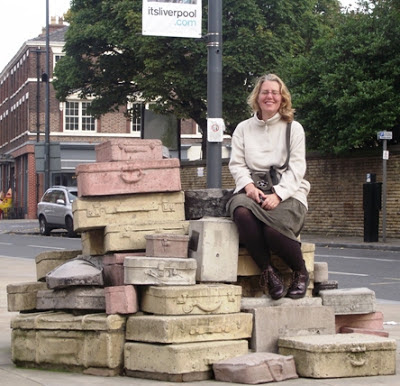 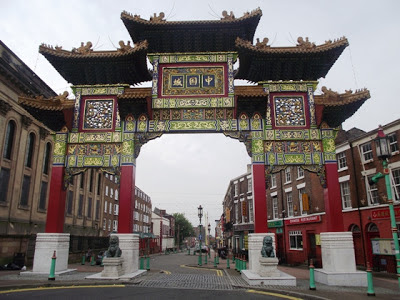 And it doesn’t end there. There’s the Walker Gallery, the Library, the St George building and, although we went and walked and looked as much as we could, there’s a whole raft of places we didn’t have time to see. If you get the chance to go – go. If you’ve got a boat, take it. 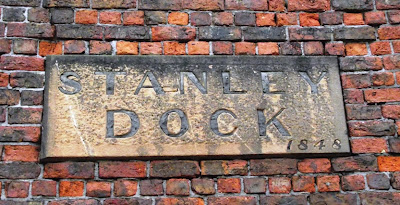 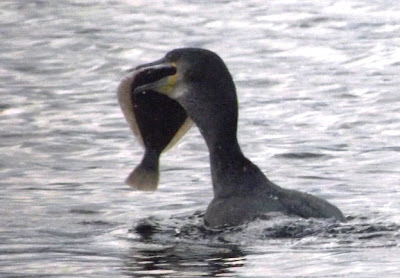 The second exciting thing was that while we were doing all that, Ann-Marie still managed to find time to apply for, go for an interview for, get and start a new job! Whoo-whoo!

We’d hoped to not have to work anymore, but hopeless interest rates and our habit of spending more money than we should mean that there’s not quite enough in the pot. We’ll review the situation each year; this year we bought a lot of paint and a new fridge, next year we won’t be doing that but something else might well come up. Ann-Marie’s got a three month contract working weekend nights in a transport office in Wigan which is where we’re intending to gravitate towards over the next month or so. At the moment she’s driving to work, but as we get closer and the weather deteriorates she’s going to walk. There’s a very nice place on the canal called Crooke less than half a mile from where she’s working so we’ll be there for a fortnight, or evn longer if the planned lock closure at Hell Meadow over-runs. In the New Year when her contract ends we’ll be off up the Wigan flight and over the Pennines towards Leeds.

On our way out of Liverpool we stopped for the night at Aintree where, although it is quite urban, we thought we’d be fairly safe. After all, we were on board and it was just one night. In the morning it was only after we’d got on and off the boat a few times that we noticed we weren’t tied to the bollards. Sometime in the night some jovial oik had decided it would be a wizard wheeze to put considerable effort into undoing our ropes and casting us adrift. No doubt they were sadly disappointed when, instead of disappearing off downstream towards a crocodile infested waterfall, Legend belligerently stayed exactly where she was. Come on, lads! If you’re going to go to all that trouble, at least give it a shove. We thought Scousers had a bit more imagination.

On a less humorous note, when we got to Haskayne, our next stop, we found two burned out boats on the permanent moorings. 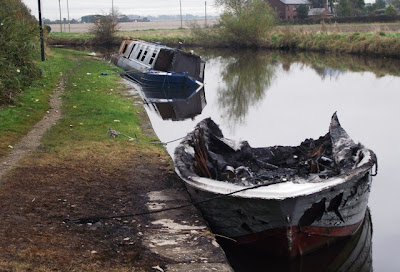 They definitely weren’t like that when we went past a few weeks ago and a bit of research on the net revealed that it had happened a couple of days previously and that the police believed there were suspicious circumstances. Not the sort of thing you want to hear when you’re about to leave your boat for four days. We had a trip down south planned to see Frankie & Harry, Mum & Dad, Fran & Sean and Karen; Haskayne had seemed the ideal spot. There’s a car park and it’s quiet, and there’s a couple of houses nearby so it’s not too isolated, but if something like that can happen it was obviously not as safe as we imagined. We had an evening of quandary but in the end decided to stick to our original plan. Working on the theory that lightening never strikes twice and that, for a while at least, everyone would be extra vigilant, we locked up and drove off down the M6 trying not to think.

In what is fast becoming our usual style when visiting our friends and family, we had three nights in three different houses on three different beds, one of which was a settee. We went out for an Indian with F&H; it was brilliant to see them and catch up with their lives, it’s been too long. In the morning we carried on to Karen’s where we ambushed her washing machine and gave it a dammed good thrashing, then took her and Ben down to Portsmouth to spend the evening with Fran & Sean. Sean made his famous Moroccan Chicken, which was followed by an equally delicious strawberry cake. If we were asked to name our favourite hobbies, “Visiting” would be right up there.

Wednesday found us at Mum & Dads. Dave & Dad disappeared into the garage and emerged a little while later with a windlass with a swivelling handle. Why? Well it’s a long story. When we bought Legend she had two windlasses, one of which was home-made and a bit rubbish. For those who don’t know, a windlass is the handle that you operate lock paddles with; crucial equipment. As we’ve meandered around the network we’ve been fishing with a “Seasearcher” recovery magnet at locks and moorings to see what we could pick up. So far we’ve found no end of mooring pins and no less than five windlasses, or “windlii”, giving us a total of seven, two of which had tubular swivelling handles and had become our favourites. We use the word “had” because a little while ago disaster struck. The Rufford branch of the L&L has six locks, each of which has a different method of opening paddles. Some have a horizontal screw affair; these have handles. Some have a vertical slide thingy; these don’t have a handle and don’t require one, and some have a traditional rack-and-pinion which doesn’t have a handle but needs one. This is where your windlass comes in. To make matters worse, some have a combination of all the above and all of them also require an anti-vandal key to unlock whatever mechanism there is, so you need to approach each one armed with various tools and it’s no surprise that our usual locking routine got slightly out of kilter. The net result was that at the top lock our two favourite windlii got put down and between us we failed to pick them up again. Later in the evening we realised and went back to look but by then they were someone else’s favourite. C’est la vie! So, that’s why Dave wanted to raid Dad’s garage for a bit of ¾” copper tube and a couple of washers. 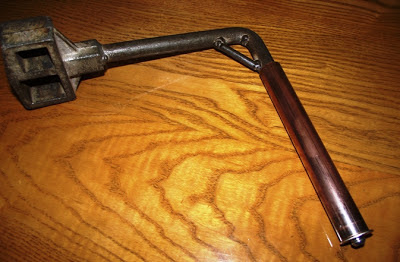 As if we hadn’t eaten enough over the previous two days, we all went out to a carvery that night and had pudding as well, then on Thursday lunchtime we were at it again in Wetherspoons. As tea-time approached along with the threat of yet more food, we thought it would be a good idea to thin out. By 9:30 we were 200 miles further north and still unable to button our jeans up, but back at the boat which, happily, was safe and sound and just as we left it.

Since we’ve been back, despite being contracted for weekend nights, Ann-Marie has been putting lots of extra twilight shifts in during the week. Her job is transport clerk, which means she gets to tell truck drivers where to go. Dave knows from experience that she’s got a natural talent for it.
at October 23, 2012