Dave would like to apologise for there being about half the unusual amount of photos in this post. This is due to him being a complete twonk, and leaving his camera in Ian & Annie’s trailer tent at Silloth. Normal service will be resumed as soon as possible.

It’s only been ten days and about six miles up the cut since our last published rambling but we’ve got quite a bit in. From Galgate we went to Lancaster where we got the car taxed. The lady in the Post Office looked at our home address and wished us a happy holiday. Cheered us up no end.

A couple of miles north of Lancaster we stopped at Hest Bank, overlooking Morecambe bay. It’s not often you get a sea view from a narrowboat window so we’re making the most of it. We’d left the car at Glasson Dock so when we cycled back to get it we used the Lancashire Coastal path, which takes in the River Lune aqueduct, 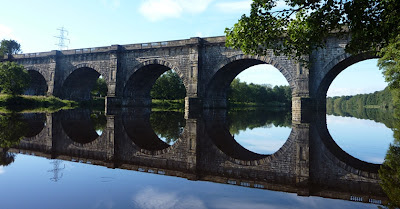 then follows the river bank on the dismantled railway line that was built in the early 1826 to link Lancaster to its new port at Glasson. The cycle ride must have brought on a fit of irresponsibility; before we knew what was happening we’d had an accidental cream tea in the cafe and a visit to the amazing Glasson Smokehouse that blew the budget right out of the water.

The Morecambe Seaside Festival was on while we were at Hest Bank, so on Saturday we went and had a look. Morecambe sea front is good place to be; 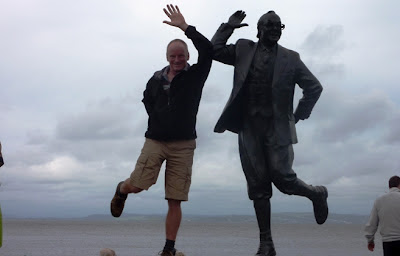 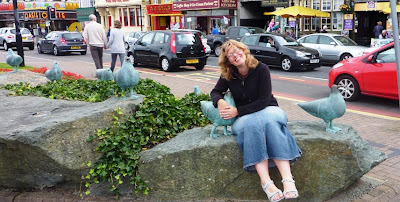 the festival added to the general happy atmosphere, and the fireworks in the evening were excellent, especially when viewed from a boat roof after a walk around a bit of Morecambe Bay and some delicious chips. On Sunday the Red Arrows turned up; they were also viewed from the boat roof and also excellent.

Legend’s next stop was Bolton Le Sands which is almost, but not quite as exotic as it sounds. Despite not having a sea view it has two pubs and a pie shop and, quite honestly, what more do you really need? There are fourteen day moorings here, a handy parking space and a wood on the off-side where Dave discovered a fallen oak tree. Water-pikey heaven. Most of the middle-sized oak is now on the roof in readiness for winter. Or, in our case, tomorrow morning.

For no apparent reason the wheels came off our Email for about five days. It’s disturbing to find out how dependant we’ve become on something that we managed perfectly well without ten years ago. We still had two mobiles and internet access but felt as if we’d been abandoned on the technological hard shoulder in the rain with no hope of rescue. For a week we had a glimpse of just how difficult off-grid life would be without the technology that we take for granted.

We got our boat pole finished. Ash boat poles go for upwards of £50 from chandlers, and even then you can’t be certain they’re actually ash. So we decided to make one. Somewhere on the Shroppie we found a nice straight bit of tree and coppiced it, then on the Bridgewater we stripped the bark off and lashed it to a hand-rail for a couple of months to keep it straight while it seasoned. Just before Garstang Dave planed it down to a taper measuring 2” diameter in the middle and about 13’ long and gave it a few good goes over with linseed oil. Now it’s painted, and so is the boat hook, and very nice they look. There is an argument that says that you shouldn’t paint poles and hooks because that way you can see if they’re going rotten. We reckon if you prime and paint them properly to begin with and then look after them, they won’t go rotten anyway.

There have been excursions both near and far from here. First we drove to Warton Crag; a big limestone lump looming over Morecambe Bay. We had a lovely day rambling about; the view from the top takes in the Pennines, the Lakes and the taller bits of Scotland. You find yourself looking for a much bigger setting on your camera; “Panorama” just won’t do it. 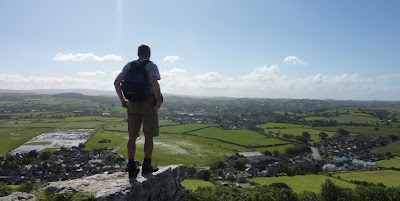 Inevitably it’s been quarried in the past and there is a very well preserved limekiln in the hillside at the base. 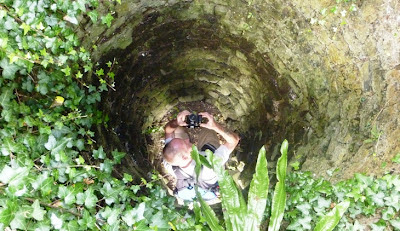 Apparently the crag is famous for its butterflies, although we saw more in the car-park when we got back than we had done all day.

At the weekend we filled our long suffering Punto with camping gear and hit the upper reaches of the M6. Dave spent a fair portion of his teenage years in the Lake District, but neither of us had ever been to the Cumbrian coast so a weekend in Silloth sounded like a good idea. The Lancaster Bombers Citroen 2CV club have held their annual camp there for ten years, coinciding with the Silloth Beer and Music Festival. So, let’s see- beer, music, a bonfire and a bunch of good mates that we haven’t seen for yonks – it would have been rude not to. We spent most of our time in Ian & Annie’s trailer tent being entertained by Toby, their whippet puppy; thank you for your hospitality guys, we hope we didn’t teach him too many bad habits.

While we were up there we went to Cockermouth, (stop sniggering at the back!) Wigton and on Sunday, had a walk round a car boot sale, which we haven’t done for ages. We found a smashing cafetiere to replace another broken one and a boat hook which we’ll put a short pole on and paint it to match, because we haven’t got quite enough stuff on the roof.

Ann-Marie’s cousin Sue and her husband Steve live at Millom, which is near Barrow-in-Furness at the bottom of the Lake District, so on the way back we took the coast road and went for a visit. Sue and Steve were the perfect hosts; we are constantly impressed by how welcome we’re made to feel by our relations. After a lovely evening and a good night’s sleep we went for a walk on the beach with Barney, their ever-so friendly Alsatian/Lab who likes carrying big rocks around. Sue is a fabulous cook and makes the most amazing puddings. It’s just as well we don’t live any closer; irresistible sticky toffee pudding really is not conducive to a healthy lifestyle.

We still brought a large portion of it home anyway.
at September 12, 2012