Our first taste of England after 3 months was a bit of a let-down to be honest. After a rather dreary drive from Dover in the drizzle we arrived at Karen’s with hardly a glimpse of the snow that everyone’s been making such a fuss about. We’ve seen newsreels with reporters standing knee deep beside abandoned cars, but to us it looked like any wet winter Thursday. Once we got to Mytchett it all got a lot better; Ann-Marie’s Mum and Dad came over for the evening and we had proper fish & chips. It’s good to be back.

We started our tour of friends and relations on Friday. First stop Portsmouth for two nights with Fran & Sean. Rather than carting a load of stuff into people’s houses, we’re parking the van outside their houses and sleeping in it. The snugness of our little home was proved on Friday night; we woke up to find that it wasn’t a conspiracy after all; a good four inches had come down overnight and we were as warm as toast. 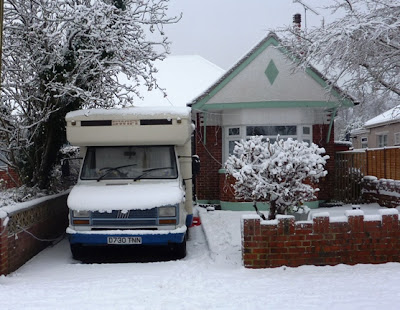 After a snowball fight and with Harry and Phoebe we built a snowman (and a snow rabbit) then spent the rest of the morning clearing the drive. 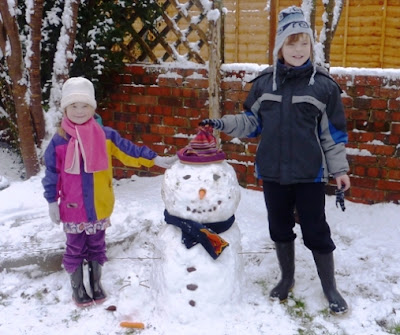 It was Harry’s birthday party on Sunday and as they live on a bit of a hill we weren’t sure if everyone would be able to get there but in the end the house was full. We’d got the van out and over the brow earlier on just to make sure we wouldn’t be stuck, so getting back to Karen’s was a piece of cake. On Monday we went for a walk with Karen, Lauren and Ben into the woods behind their house and spent a happy half hour engaged in the sport of uncontrolled plummeting down a steep hill commonly referred to a sledging. 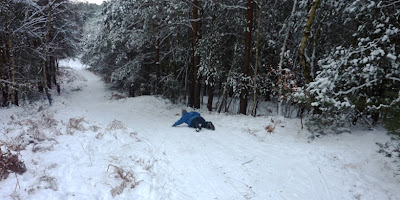 We know all this talk of snowballs and shovelling is old hat to our reader who’s been through a lot worse, but it’s very exciting for us. Of course there are reports of closed airports and we’re supposed to be flying on the 4th, but that’s ages away and at the moment we’re busy having a Wonderful Christmas Time. We’re off to Fleet this afternoon, Whitchurch tomorrow, then Frankie & Harry’s new house for Christmas which we’re very excited about.

Merry Christmas Reader, we hope you’ve enjoyed our ramblings. Thank you for coming along with us. We’ve had a fantastic time and we’re very much looking forward to more adventures Down Under. Flying times to New Zealand are a bit scary; Heathrow to San Francisco – 11 ½ hours, 5 hours wait, San Francisco to Auckland - 13 ½ hours, 2 hours wait, Auckland to Christchurch – 2 hours. We get a 39 hour Tuesday and because we cross the date line we don’t get a Wednesday at all. It does your head in. We’ve found that denial is quite effective. 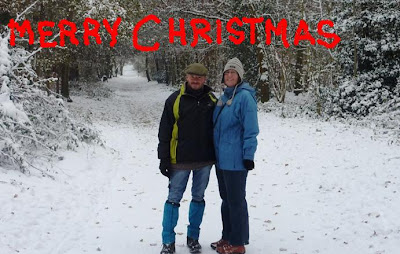