Deep and Crisp and Even.

At the beginning of December, Britain was hit by winter weather conditions so severe that the whole country ground to a halt. Temperatures as low as -21deg were recorded, along with several feet of snow cutting off whole communities and stranding millions of people. Thousands of abandoned cars, closed airports and cancelled trains and buses wreaked havoc among the travelling public.

We were dog-sitting at our friends house while they went to visit their children; they didn’t get back for six days. 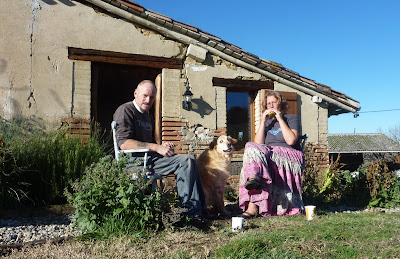 ﻿Last Sunday we all went in Jacqui & Al’s green and white 2CV Dolly over the department border to Gers and the village of St Clair. There was a Christmas market and the Citroen 2CV Club from that area were holding their Christmas meeting as well. The turnout was very impressive, dozens of cars and a big hall with lots of new and second-hand spare parts.

The market was good as well, there were lots of festive stalls and we managed to find a couple of Christmas presents.

In the freakiest of coincidences, when we parked up in line with all the other 2CVs, out of the yellow one next to us stepped a man we’ve known for years. Steve Hill is a life-long Citroen enthusiast and guru. He was one of the founder members of 2CVGB and we've known him ever since we joined the club. We knew he lived in the south of France somewhere and it wasn’t all that surprising that he should be at a meeting, but it was very strange to find him parked right next to us! We hadn’t seen him for ages but of course, being British, we all just said “Oh, hi there.” as if it was the most normal thing in the world, while all around us the French were greeting friends that they see every week with hugs and kisses!