When we were at Foulridge, we rescued some wooden decking from the skip. There was enough to cover about half of our well-deck floor and with a bit of online research we discovered that it came from Ikea. So, on the way home from Manchester airport we popped in for a matching pack. 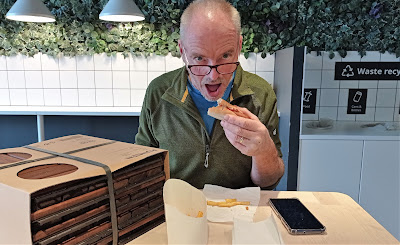 And a hot dog of course.

The next morning was Saturday, so Dave drove out to Colne for parkrun, then took the car to Barrowford locks and walked back over the tunnel to Foulridge for a shower and breakfast.

Foulridge Reservoir. It's empty because the top 6' of the retaining wall is being removed due to it becoming unstable. It's planned work, but it means that, combined with the unusually dry weather, the Leeds and Liverpool is desperately short of water .
The mile long Foulridge Tunnel has a very simple traffic lights system. The lights at both ends are normally red, and at the east end they switch to green for ten minutes on the hour. It takes about 20 minutes to get through and at the west end they go green for ten minutes on the half hour. We were aiming for the one o’clock east – west passage, so just after midday we moved up to the services and hooked up to the water point. We were just finishing filling when John turned up to join us for the trip. Ann-Marie made a brew, put a load of washing in the machine and we shuffled forward to the tunnel waiting moorings. By the time we’d got all our lights switched on the traffic lights had turned green and we were off. Years ago, when we started boating, Legend had a single tunnel light at the front, which meant we could see where we were going but not much else. We still have that, but nowadays we switch on all the cabin lights which illuminate the walls, and the engine room lights so we can see each other. The best upgrade though, is another headlight on a swivel mag mount at the back. This lights up the roof above our heads, so we can see all the stalactites and other formations. It was the first time John had been through a canal tunnel and he thoroughly enjoyed it. We were expecting it to be drippy, but for the most part it wasn’t; another sign of how dry it had been recently.

At the top of Barrowford locks we tied up and took John back to his car, then came back and triple pegged the washing out in the wind.

This is our new decking. The idea is that as well as looking nice it will save the paint getting worn out and be nicer to stand on in bare feet. 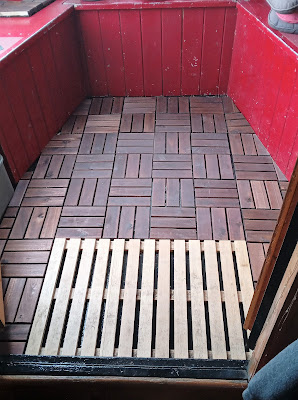 While we were moored at Barrowford we drove up to Settle for a lovely circular walk up the Ribble valley to Stainforth, then back over the scar taking in the Stainforth Force and Catrigg Foss waterfalls. 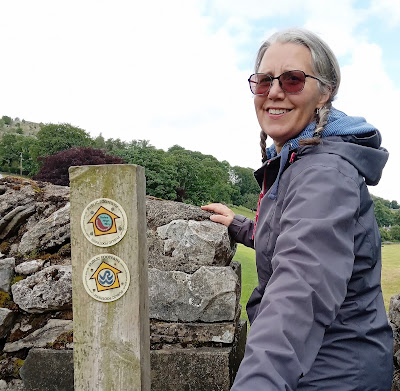 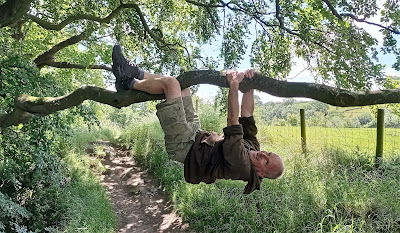 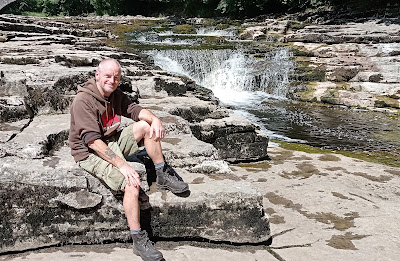 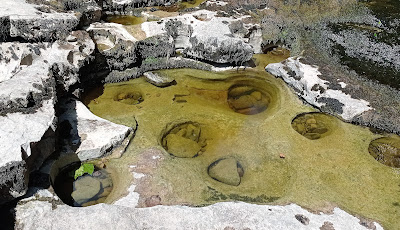 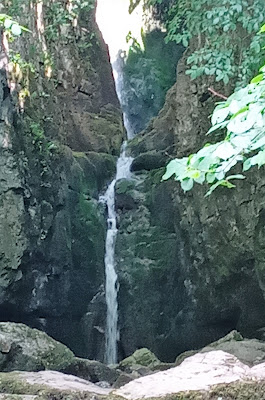 Catrigg Foss waterfall. Nowhere near as impressive as it would be after heavy rain, but lovely all the same 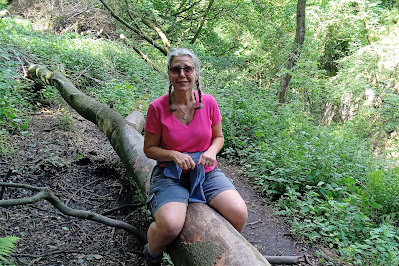 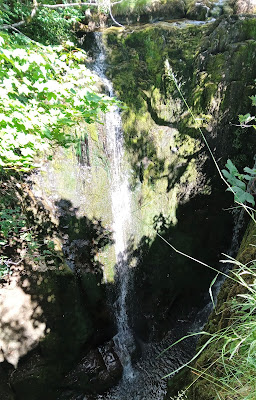 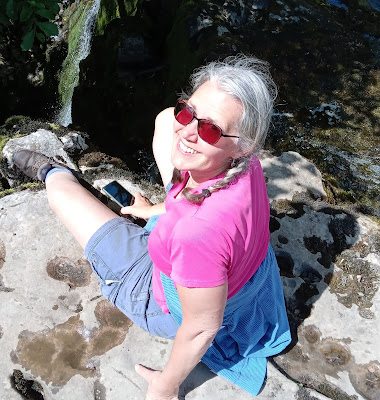 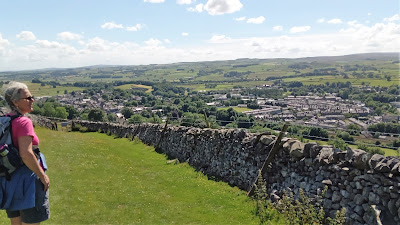 We also went to join a group of our family for a couple of days in Hathersage. Somehow we managed to get the boat and the car half a mile apart just when we needed to tranship all our camping gear from one to the other. Not like us at all, but our trusty little folding sack barrow coped admirably. 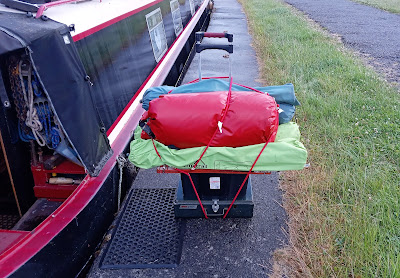 Load No.1. There's a Machine Mart folding sack barrow under there somewhere.
Cat and Ben were over from Hong Kong for a visit, and Anne had hired a house for a week so that all the family could drop in. We found a nice looking campsite close by and booked in for a couple of nights. It was lovely to see everyone and the house was full of food and laughter from start to finish. Thursday was the main event; in the morning Dave went out for an early - and surprisingly hilly - run with Anne and Cat, then us, Anne and Andy went for an arm waving and cairn building walk along the ridge above Mam Tor while the kids went climbing. 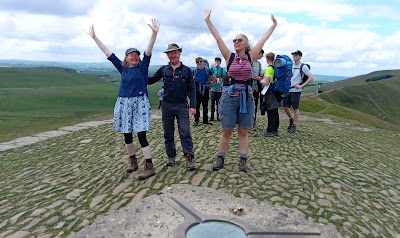 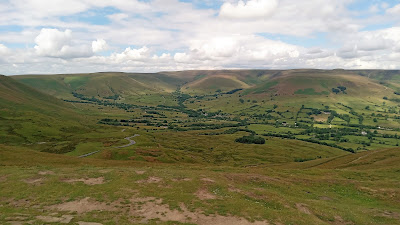 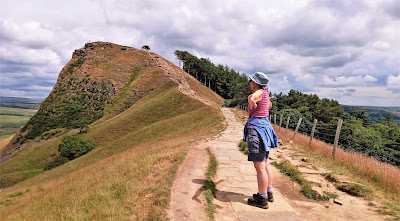 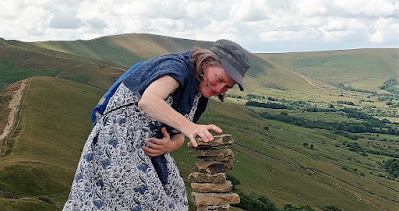 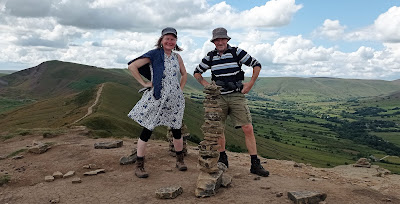 In the afternoon we got the food sorted for the evening before all the Foxes turned up. We’d planned a barbecue, but the weather was looking a bit grim and the little grill wouldn’t have coped with the huge amount of food we’d accumulated so we decided to cook it all indoors in the oven instead. The result was a curious production line of various dishes, but it was all very tasty, and there was plenty of wine so no-one minded at all. 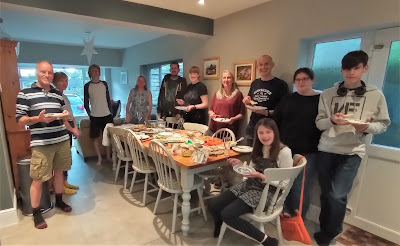 That night the idea of a wet walk back to the tent in the dark seemed less appealing than it had earlier, so we stayed in the house. In the morning, after playing at cleaning fairies and having long goodbye hugs with everyone, we drove back to the campsite to pack our tent up before going for a gentle walk up Stanage Edge. 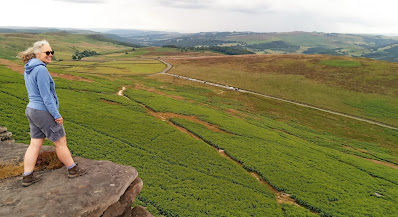 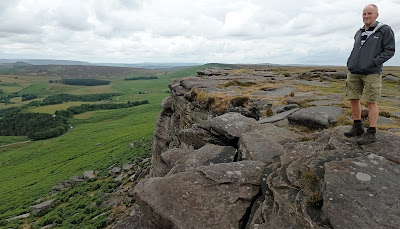 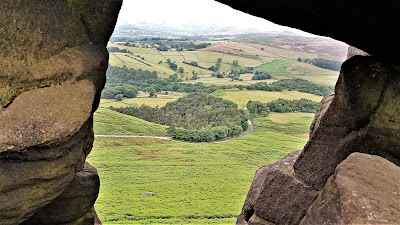 It was a great weekend, lovely to see everyone, and as always we all vowed to do it more often.

Barrowford locks are only a half hour walk from Colne, so the next Saturday we walked to parkrun in the drizzle. Ann-Marie was marshalling and it brightened up by the end so we both dried out a bit on the way home. Just as we arrived back at Legend, Nb Out Of The Blue came round the bend heading for the locks. We asked them to wait for ten minutes while we did a rapid costume change, then got the ropes on, fired up the Lister, and joined Rose and Guy for a slick trip down the flight. 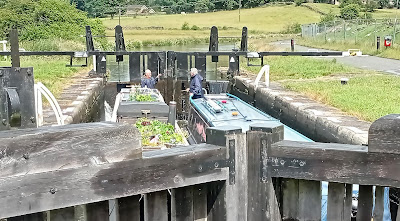 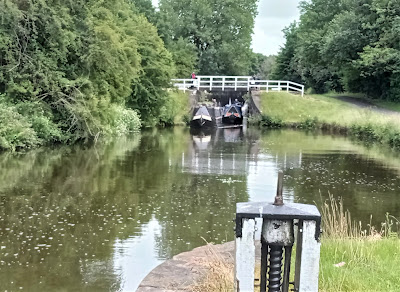 The L&L was rapidly running of water, and CRT had announced they were closing all the locks between Wigan and Skipton on the 18th of July, which was only a couple of weeks away. Rose and Guy were getting the hell out of dodge and planned to be down the Wigan flight four days later. We’d have really liked to have gone with them, they were lovely people and very efficient through the locks (a quality we greatly admire!), but sadly that was too fast for us, we had an MOT test booked and a road trip into Liverpool planned, so it would be at least a week before we got to Wigan. At the bottom of the flight, just as we were leaving the last lock, Ann-Marie slipped on a badly aligned coping stone and twisted her ankle. We pulled over onto the moorings on the off-side to assess the damage and have the breakfast we’d missed out on before we set off. It was just as well that we stopped, because John turned up just as we were tucking into our Weetabix. We were somewhat ashamed; we’d forgotten we’d told him we were going to be moored there and we were at our worst. After starting off in a rush the boat was a mess, hastily discarded sweaty running gear, breakfast things and general untidiness strewn around, and poor Ann-Marie with her puffy ankle up on a stool in the middle of it all. John was very good about it though, we gave him tea and sandwiches and he went home happy, albeit slightly bemused at our chaotic life.  It was a really nasty sprain and Ann-Marie could hardly walk. Her other knee was just getting better and now this had happened. 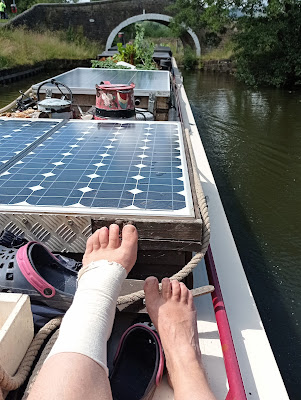 She was beside herself and the timing couldn’t have been worse; we'd only just come down from the summit of the canal, in 12 days CRT were going to shut it and we had 41 locks and 45 miles to go. Dave got on to a couple of Facebook groups asking for help, and also emailed CRT explaining our predicament, and asked when they would have volunteers on the four lock flights ahead of us.

Would we get down before the closure? Would we be trapped again? Had we jinxed another canal?

Dear Reader, you will have to wait till the next instalment to find out.