While we were moored on “The Wiggles” we got invited to Kate and David’s Jubilee party barbecue, so the days beforehand we were mostly filled with craft and cake making. The invite stipulated bringing a crown each, and please could we bring a cake and our Union Flag bunting, as you can never have too much of either. A sentiment we wholeheartedly agree with. 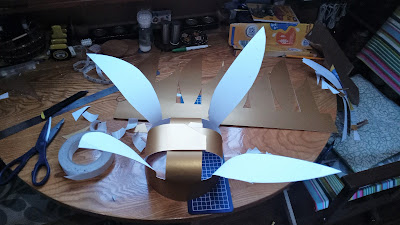 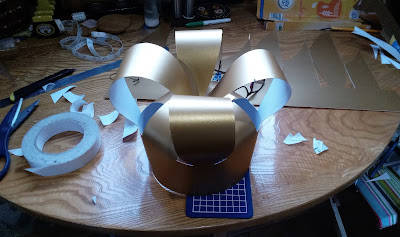 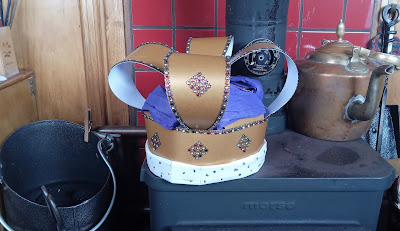 The finished product.
While Ann-Marie was busy in the kitchen...

...Dave made yet another set of window bunting for the boat. 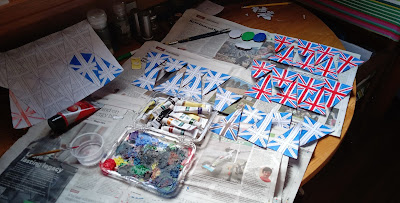 From American Independence Day to Guy Fawkes Night there’s barely a named day goes past that we haven’t got a string of something up in the windows, and we want to make four seasonal sets for the times in between. We’ve got spring and autumn already; we just need inspiration for summer and winter. 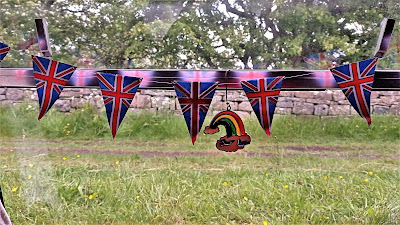 The party was huge success... 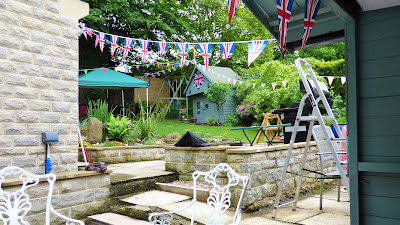 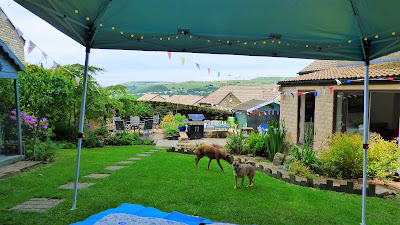 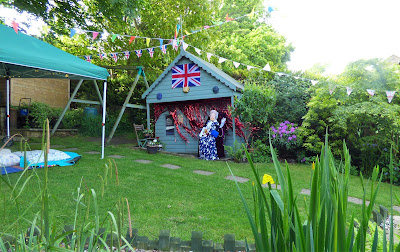 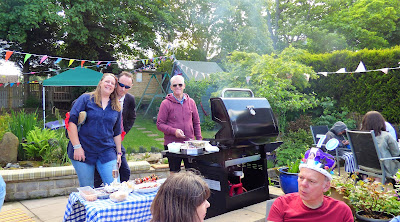 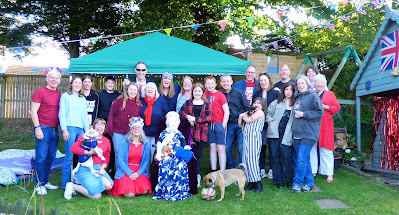 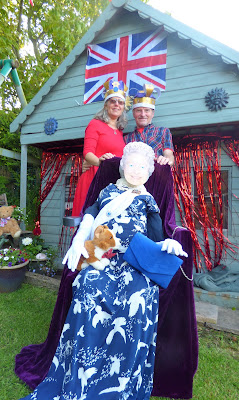 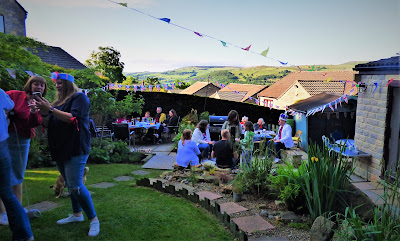 ...our crowns were pipped at the post in the judging, but Gary’s victory was well deserved. 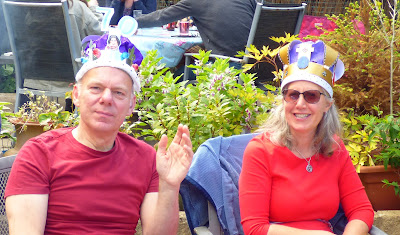 It was the Spitting Image picture of the queen on his fabulous crown that clinched it.

Of course there was far too much food, especially cake... 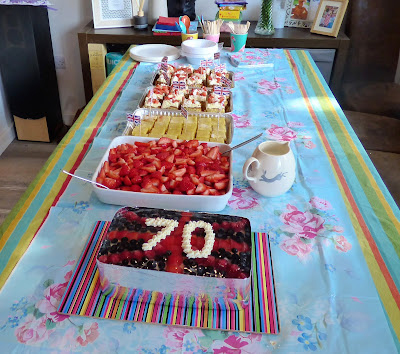 ...but it was all so good and irresistible. We stayed over and snuck out in the morning for parkrun at Cliffe Castle; Dave running, Ann-Marie tail walking and both of us wearing our crowns. 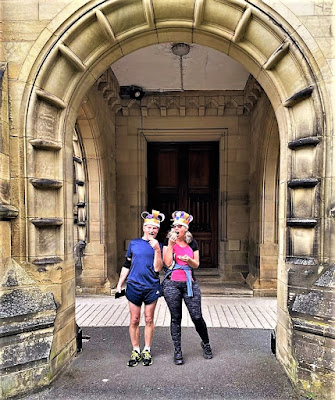 David came down with Dylan for a bit of moral support, then we all walked back up the hill to their house for breakfast. After that we said fond farewells and came home still stuffed from the party and laden with leftovers. Legend was gradually moving out of Kate and David’s catchment area and we’re really going to miss being close enough to just pop over for a cuppa.

On a lovely sunny morning, with mist in the valleys, we were up early and out for a run. 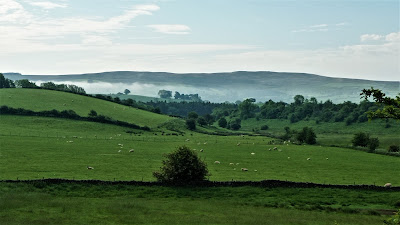 Then with fresh coffee on the back deck, we cast off and left The Wiggles to head for Greenberfield Locks near Barnoldswick (or Barlick, depending on which side of the Yorks/Lancs border you’re on) where we’d parked the car the day before. We stopped for water at East Marton...

...then got another fabulous mooring at the bottom of the locks...

...although to be honest, just about everywhere on this stretch of canal is pretty fabulous. We had a wander into Barnoldswick where the locals had fully embraced the Platty Joob attitude. 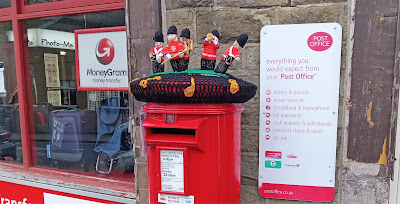 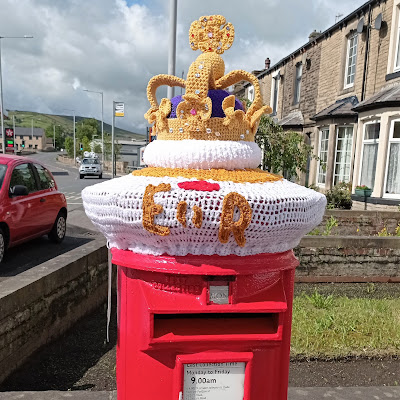 On the way in we passed the Rolls Royce establishment, which was quite a special moment for Dave. 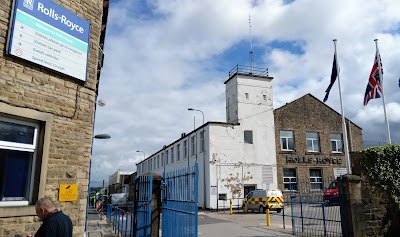 His dad was a draughtsman at RR in Derby and was involved with the RB211, the STOL engine that was made for the Tristar in the 70’s. The B stands for Barnoldswick and it was here that it was developed, so Robert Burdett’s drawings of turbine blades and honeycomb reverse thrust doors were used somewhere inside these gates.

All the plants came off the roof so we could give it a clean, and got consolidated at the front so that our automatic watering system could be deployed for when we go to France to meet Axelle. 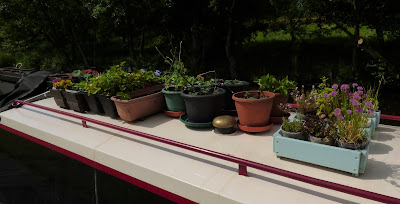 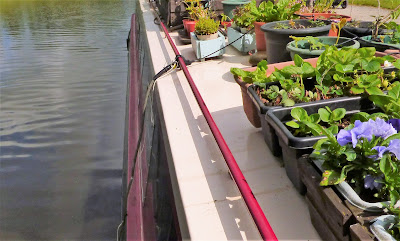 Dave's automatic watering system. There's a bilge pump on a timer at the end  of the hose pipe. 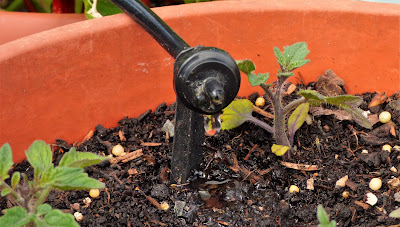 And little drippers in each pot at the other end.
The bulbs got lifted and laid out to dry in the log box and were replaced by dwarf beans and peas, and we sowed some more radish and rocket seeds. So, after what must be the coldest spring since records began, our seedlings, along with the lettuces we got from the Margees, the tomato plants that someone left by our boat in Skipton, the free pansies we got from the Texaco garage in Crosshills and the Nasturtiums that we originally collected the seeds for on the K&A canal, our buckshee roof garden is gradually coming alive again.
at June 12, 2022