Bingley was a lovely place to moor... 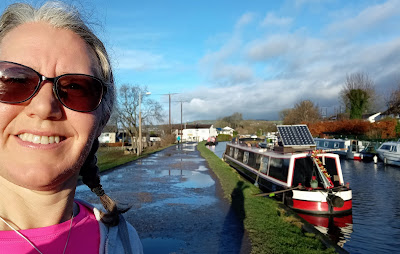 Glorious morning sunshine at the top of Bingley 5 Rise.
...but during the week we were there - and the following week - everything got a bit pear shaped and broken. (In fact it had started at Saltaire where Ann-Marie had fallen off the boat and some clown had swatted the driver’s side wing mirror off the car.)

While he was doing his monthly checks, Dave used our new bubble tester and was shocked to see it produce a bubble, meaning we had a gas leak.  Also, the car engine started making a weird noise, but the worst thing was that Ann-Marie’s knee turned out to be a lot more serious than she first thought. The bruising went all down her shin, with the worst pain in her knee. She put a brave face on it, even swinging the bridges from Bingley to Crossflats...

Mooring up at Crossflats.
...but after ten days she gave in to all the nagging and let Dave take her to Airedale A&E. After an x-ray they decided that she’d chipped the top of her tibia, so they strapped her leg into a big velcro leg brace... 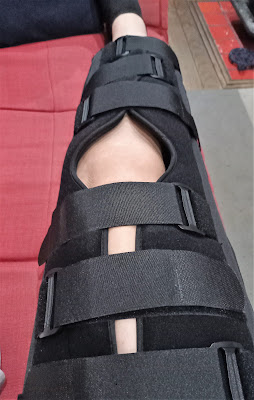 ...and made her an appointment at the fracture clinic the following week.

Back at the boat Dave investigated the gas leak and found the T junction under the sink to be the cause. However a slight tweak on the offending joint resulted in a complete failure, further investigation revealed a bent pipe; probably the result of the previous administration’s over-zealous attempts to tighten it up. Dave put an on-line order in for some 8mm copper pipe and copper olives, along with gas-spec tape and plumbing seal, and we began to learn how to live with a gas-free boat until it turned up.  Luckily we have a very good camping cooker, so we put that on top of the hob, and of course we have the fire for baked spuds and keeping a kettle hot, so it wasn’t that bad.

Things started improving with the arrival - and relatively painless fitting - of a new wing mirror on the car, which made the trip down south for Karen and Andrew’s shared birthday possible... 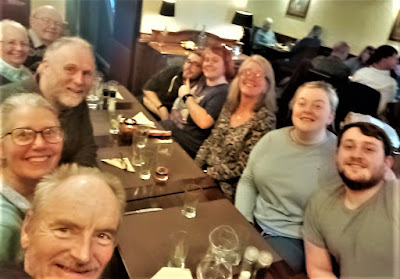 Karen and Andrew's birthday dinner.
...but Ann-Marie, with her leg strapped up and immobilised, found the long journey very difficult and painful, with every bump in the road jarring her knee. We broke the return trip up by stopping off to see Martin and Yvonne in Ardleigh for a lovely relaxing couple of days, (which included their wedding anniversary) then popping into Market Harborough for lunch with Bob and Mandy at their winter mooring.
We were a bit anxious coming back to the boat; while we were away we’d heard there had been a series of break-ins on unoccupied boats in the Skipton to Kildwick stretch. 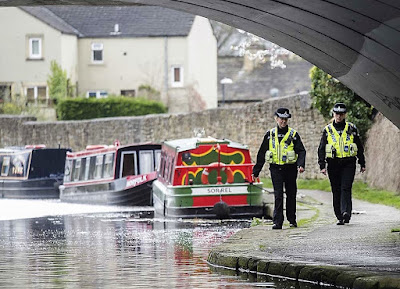 There has been an increased police presence in and around Skipton after a number of boat burgleries.

By then Legend was moored at Riddlesden where we felt quite secure - being overlooked by “nice” houses and quite a way from easy car access - but it was still with a degree of trepidaciousness  that we walked round the final bend to find our little home safe and sound where we’d left it. We can’t imagine how devastating it must be to have a break-in; it was bad enough when someone stole our generator, but to have the boat ransacked doesn’t bear thinking about. We can perfectly understand why some people never leave their boats on the towpath and always find a marina if they’re going away.

With Ann-Marie out of action, David very kindly came to help us through the next couple of swing bridges to East Riddlesden where there was much better car access. Single handing through swing bridges is virtually impossible. Given perfect conditions, you can theoretically mange the manual ones with a long rope and a boat pole, but any hint of wind or a stiff bridge puts paid to that, and the electric ones really are impossible. For historical reasons, (more about that in a minute) the pivot and the controls are on the opposite side to the towpath, so once you have the bridge open you can’t get back to your boat. CRT are gradually converting the electric ones and moving the control box to the towpath side, but it’s a long process, and it still leaves all the manual ones, where often the only options are either to wait for another boat - which in the winter, (especially this winter) could quite literally be weeks – or cajole a passing walker into helping. To be fair, most people find it quite exciting and are more than willing to lend a hand.

So why, you ask, are these bridges so stupidly designed that they can’t be operated by a single handed boater? Well, Dear Reader, when the canals were built it was all about efficiency. The new waterways were the state-of-the-art high speed transport system, and as such boats had priority. The swing bridges were left open for navigation, and only closed if someone wanted to cross, or if the farmer wanted to get his stock into the field on the other side. The reason they swung to the off-side was so that there was nothing on the towpath side in the way of the towing rope, leaving horse and boat free to carry on their journey unimpeded. 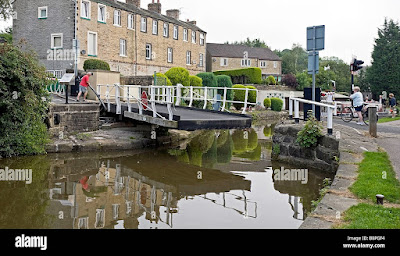 When the canal was built there would have been no railings, signs, or even bollards on the towpath.

That little revelation is often a light-bulb moment, not only for passing dog walkers, but also for boaters who’ve been doing it for years. (In case you were wondering, a chain was attached to the end of the bridge deck and went across the canal bed to a ring on the towpath side, so that it could be pulled across, and a handy pole would be left on the bridge for pushing it back again)

At Ann-Marie’s visit to the fracture clinic she was told there was nothing on her x-rays to indicate further breaks and that she could remove the brace and carry on with pain killers and gentle exercise. That was a huge relief; we’d both been secretly harbouring concerns about possible surgery, or at least living with a cast on Ann-Marie’s leg. Obviously no running or big walks for a few weeks, but with lots of rest and a bit of gentle cycling and a stroll every other day she should be fine. We still managed to get out on Saturday mornings to go to Parkruns, with Dave running, and Ann-Marie as a Volunteer Marshal. 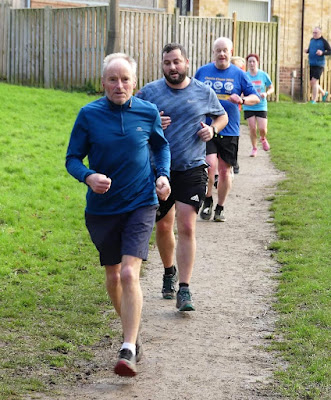 Dave's really enjoying Parkrun and his times are improving. 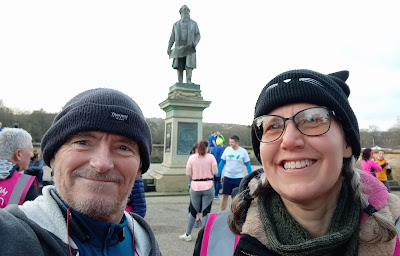 Pre-run selfie at Robert's Park in Saltaire.
Ann-Marie with a pink hi-viz in volunteer mode.
We also attended Parkruns at Bingley and Keighley
The new pipe and olives arrived at our handy Amazon locker, (AKA Kate and David’s hallway – it’s lovely to have such good friends nearby when we need them) so Dave got stuck in and soon had the gas system back together and better than ever. 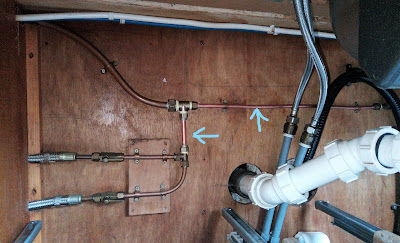 The new sections of gas pipe under the kitchen sink.
He also got a much needed strap wrench and finally got the oil filter changed on the Kia which, along with an oil change, has quietened it down considerably.

And so, as we began our self imposed confinement on the lovely Bingley to Gargrave pound of the L&L, it seemed that our little broken world was gradually getting mended. Hopefully the same can soon be said for the lock at Gargrave. 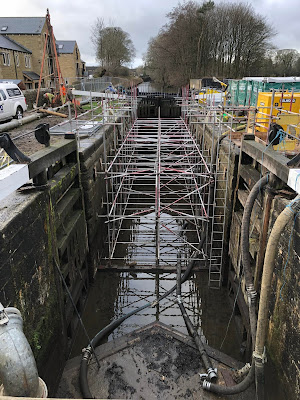 Eshton Road Lock at Gargrave. This is what is stopping our progress across the Pennines.
CRT estimate the repairs will be completed by Easter.
They haven't actually said which Easter.
at January 26, 2022