Forgive us, Dear Reader, for a spot of self indulgence as there isn't much boaty stuff in this post. Instead of our usual diary of triumph and disaster on the inland waterways, this is a day trip down memory lane. 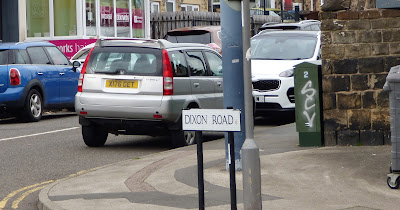 Both of Dave's parents grew up in Sheffield and his grandparents, along with several great aunts and uncles still lived there when he was little. His grandparents on his mum's side were the last to leave; they emegrated to Australia in 1964 and he hadn’t been back since, so visiting the city was a bit of a pilgrimage.

On the Saturday we set out early for a family history day, visiting all the places that Dave remembered from his childhood. We started by walking over what is now called Springwood Park...

...to  Wadsley Bridge, just above Hillsborough (the home of Sheffield Wednesday FC) where his Dad lived.

Sadly the row of terraced houses was demolished in the 70’s when the road was widened. (Judith remembered their Dad going there when it was being knocked down and coming back with an edging stone from the garden)

When Penistone road was a single carriageway, this is where the back gardens would have been.
So we had a coffee in Sainsbury’s on top of where the back gardens and outside toilets used to be, (which, apart from the flagstones in the scullery kitchen was about the only thing Dave could remember about the houses) before heading down past the football stadium through Hillsborough Park to Dixon Road.

Dave’s mum lived on Dixon Road and he remembered going to the park on family visits to his grandparents. Sheffield Wednesday were playing at home against Lincoln City and as we went past there was a throng of supporters from both teams waiting for the gates to open The owners of local chippy must love match days because everyone seemed to be tucking into battered sausage and chips. We very nearly threw our picnic in a bin and joined them. We had a quick look in the library in the park before walking up Dixon Road to the house that Dave’s mum and aunty and uncles grew up in. 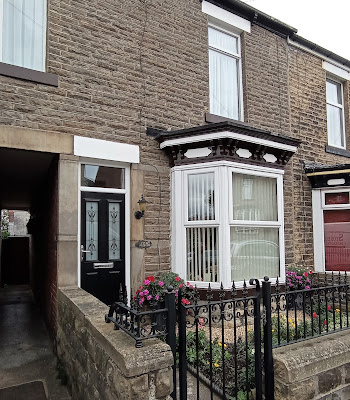 Dave knocked on the door to ask if we could take a photo of the front of the house which was when we met the gentleman who, in 1964, bought it from Charlie and Dorothy Wood - Dave’s grandparents - and has lived there with his wife ever since. He invited us in to see the place and we had a lovely chat about what they’d done and what Dave remembered about the house and garden. Of course the house seemed a lot smaller than Dave remembered it - he was 6 the last time he saw it - but the stairs were just as steep. The back garden was amazing; Dave’s memories are of weeds and washing lines and a rickety brick path leading to a wonderful tumbledown shed stuffed full of bits of motorbikes and other amazing treasures. Now it’s absolutely stunning. 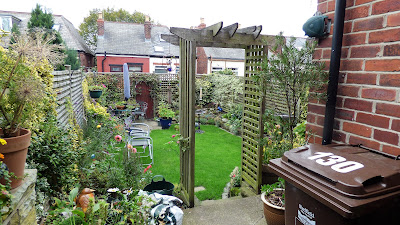 From there, as Dave had done many times with his Grandma, we walked back down to the park for our picnic. 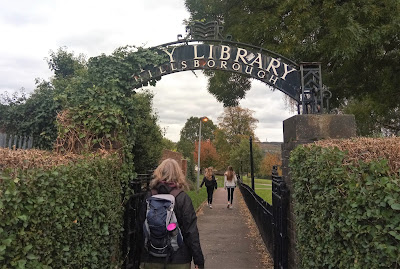 A healthy ham salad roll, no matter how tasty, loses some of its appeal when the aroma of several hundred battered sausages still lingers in the air, but by then there was a constant stream of fans swarming up the street, along with numerous mounted police on very big horses and several riot vans, so going back to the chippy wasn’t going to happen.  For the most part, the fans were very well behaved, there was just an awful lot of them, so we sat on our bench until it calmed down a bit, then carried on down to Holme Lane where Charlie Wood had his newsagent and toy shop. Dave only vaguely remembers the shop, and thinks they probably sold it when he was really little. M.L. Woods Newsagent and Toy Shop is now an empty unit next to a barber’s shop. 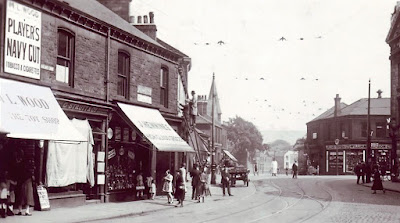 Hillsborough Corner, then and now. 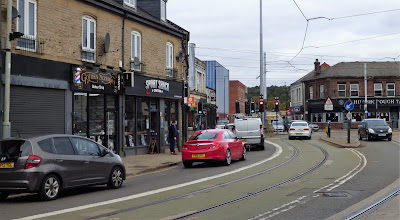 The ironic thing about these two photos is the tram lines. The original lines were all torn up in the sixties and seventies, and the “Last Sheffield Tram” is one of the exhibitions in the Crich Tramway Museum. Cars and busses ruled the streets for the next forty years until environmental concerns saw trams return with the new lines laid in exactly the same place as the old ones.

After that we went to find the Sacred Heart church where Dave’s parents got married. 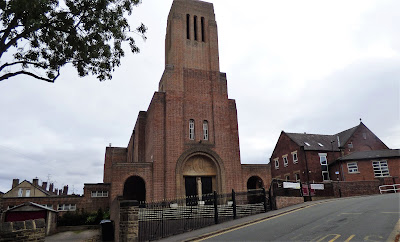 He remembered standing on those church steps for a photograph at the wedding of his Uncle Phillip to the very glamourous Auntie Sylvia in the sixties, and feeling quite awestruck to be surrounded by all their friends in kaftans and flairs and miniskirts.

From there we walked over to St Michael’s church at Rivelyn, where several generations of Woods, Pilleys and Horrax’s were buried. We went to the wrong place to start with; the Church of England and Catholic cemeteries are next to each other on a densely wooded hillside and we spent a good half hour trying to make the map that we’d downloaded for one fit the rambling, overgrown gravestones of the other. We got there in the end though...

...and managed to find a couple of great uncles and aunts before we had to leave to get back to the boat before dark. 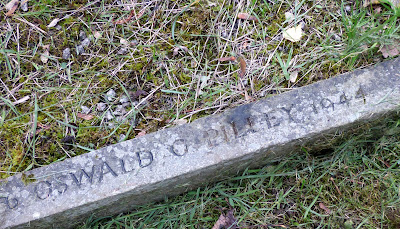 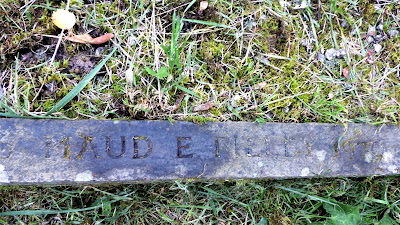 It was a really wonderful day out and we’re so glad we had the opportunity to do it. If we still lived on land there’s no way we would ever have even considered driving up to Sheffield just to have a look at house and an old shop, but this travelling boat-life has not only taken us to places we wouldn’t have otherwise visited, but has also changed our outlook on what is really important. People and experiences have become our priority, and for that we are eternally grateful.