Just before we left the Erewash, our friend Jim came to the boat and serviced our gas cooker. He’s a proper gas-safe registered engineer with marine qualifications and our hob had only been working on three out of the four rings for a while. In fact it’s only had three good rings since we bought the boat, the other one used to be only good for simmering, but for the last year it’s been so weedy that it can’t stay hot enough to keep the flame failure device open. Jim really knows his stuff; in no time he'd cleaned all the jets, checked the flame failure reset times and checked the oven thermostat. We’ve now got 4 superdooper hot rings and the oven gets up to temperature really quickly. 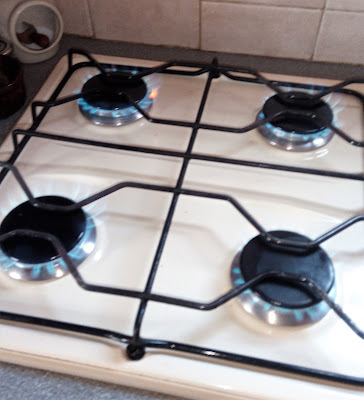 We’ve got our third boat safety check coming in January so it’s good to know that everything is now working properly. Apart from Jim and Denise being good mates of ours from our 2cv club days, we have no affiliation to him, but he did such a good job that we think he deserves a plug. So If, Dear Reader, you find yourself in this neck of the woods and you need some work doing on your boat’s gas or plumbing system, he’s the man:

We used the services at Trent Lock then dropped both boats down the lock onto the Mighty Trent before turning upstream to moor on the river pontoon. 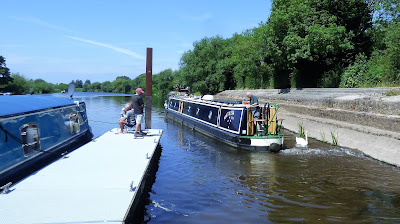 There are only four spaces on the pontoon, so it was fortunate that there were two available. 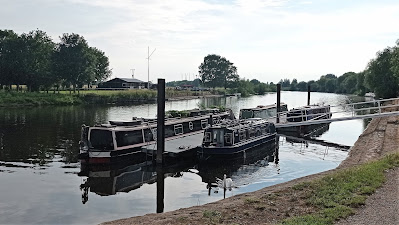 It was a beautiful sunny day and Bob and Mandy treated us to a lovely cream tea in the little tea garden at the lock. 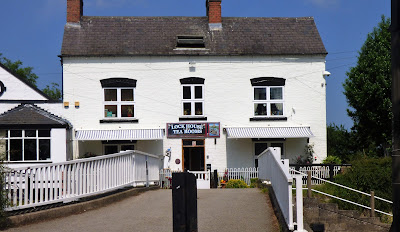 That evening we took Jim and Denise out for dinner at the Lock Inn, (which for us meant walking up the pontoon gangway and through the pub garden. It doesn’t get any more convenient than that!) Excellent food, and great company.

While were were on the pontoon Dave got the herb planters finished... 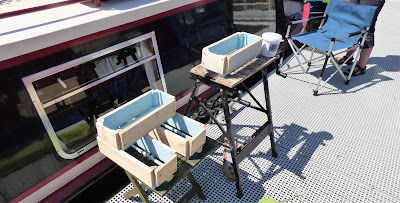 ...and finally wired up the little lights under the shelf in the front corner. 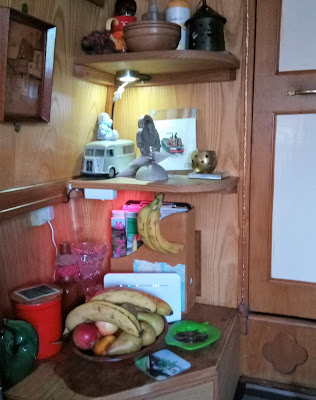 They used to be on a plug, but the plug got swapped onto the new router, so they’ve been waiting to be hard wired in. He also serviced the genny, which isn’t all that difficult, just change the spark plug and the oil, clean the air filter and job done.

With Matilda’s back doors just a few steps from our well deck on the other side of the pontoon, it was all too easy to have some good times with our neighbours. First we had a film night, then Mandy made a delicious lamb tagine followed by another games night.

The next morning we split up for a few days; (nothing to do with the games night, honestly!) We left Matilda Blue on the pontoon and went upstream through Sawley lock, along Sawley cut... 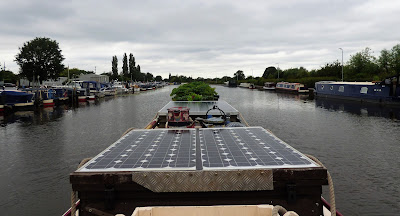 ...then carried on past the entrance to the Trent and Mersey Canal... 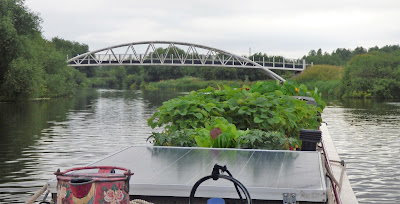 ....which is the navigable limit of the river. (There are sections of canal further up where the T&M is fed by the Trent, but as far as proper river navigation is concerned, Cavendish Bridge is the limit.)

Going upstream for a few miles gave the engine a good workout; the first one it’s really had since the rebuild and the first time it’s got properly hot since Dave had the exhaust to bits. About half a mile before the bridge there was a rather loud bang from the exhaust and a big cloud of smoke, which must have been all the diesely soot that got dislodged from the silencer reaching its flash point. It quite literally cleared its throat. After that it happily chugged on as if nothing had happened.

Our ancient copy of Nicholson’s has a pub marked at the bridge, but it’s now derelict and if there ever was a mooring it has long gone, so we turned round and went back to Sawley cut...

...where we filled with water, then moored up just before the little café and microbrewery in the former lock keeper's cottage.

In the afternoon we drove into Ilkeston and popped into Boots for Dave’s prescription. They had no trouble getting it from the Electronic Prescription Service, but when the pharmacist went to print the labels, the computer crashed. Not just hers, but the whole of Boots. Nationwide. She was very apologetic, but of course without the labels, she couldn’t hand the drugs over. With the promise of a phone call when it was fixed we did a bit of shopping and went home. The phone rang just as we were leaving the boat on our way to Georgie’s birthday party, so we had to wait till after the weekend. Its just as well we keep a spare weeks worth of tablets!

Georgie’s party was a hoot. 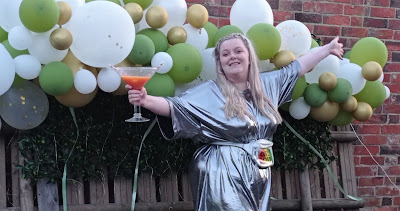 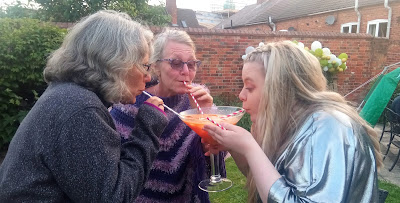 With 30 people in the garden for a barbecue, it was the biggest gathering we’d been to since the beginning of lockdown. There was a noticeable lack of mingling, but whether that was due to Covid or the fact that there were several very diverse groups of party goers is debatable. Suffice to say, we had a very good time despite feeling ancient, wrapped up in jumpers with cups of tea, watching the scantily clad twenty somethings enjoying their birthday celebrations. Well, at least until ten o’clock, when Dave, poor old fellow, insisted on going home to warm up.

Next morning we cycled up the towpath to Shardlow and had a quick look round the village... 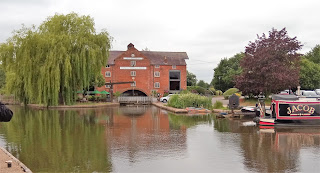 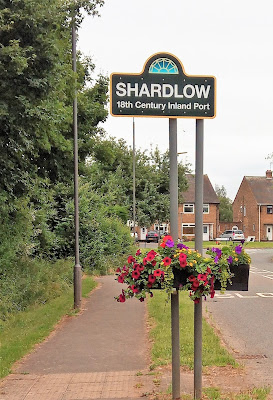 ....before going to the Lock House café at Sawley for coffee sitting in the sun watching the world go by. They sell a whole range of different flavour scotch eggs, which sounded very tempting, but Dave’s a sucker for a hot sausage roll.

The following day started off a bit grey and wet, but it cleared up and by the time Giles arrived we’d made a support to stop the peas being blown over and were ready to set off. Giles was living in his camper and sort of touring the country visiting people while wild camping at the same time, so he had a night in the pub car-park and dinner and breakfast with us. (He’s no stranger to van life; we first met him about 20 years ago when he was living with his partner Helen in a converted mobile dentist’s van in a slate quarry in Wales) We stood him on the back deck and boated down to the junction where we did a tour of all the various watery bits before turning round in front of the huge Thrumpton weir and returning to the pontoon, where we moored up for another couple of days. In the afternoon we had a wander up to the pub car-park to have a look at Giles’ van which - on the outside - was a very mundane looking Citroen Dispatch, but when he slid open the side door the inside was amazing; almost everything was either reused, recycled or re-purposed and all squeezed in very ingeniously. Very quirky and very Giles.

After breakfast the next day we waved goodbye to Giles and then went up to where Matilda was moored on the Erewash moorings for coffee (they’d gone up the lock for water a couple of days previously). We got a message from Georgie to say that Ben had passed his driving test which he’d first applied for before lockdown, so we promised to take them both out celebrate and booked a table in the tapas bar in Sawley for the following week after all the European cup football was done with. In the afternoon, after Dave had gone back to Boots for his prescription, we had a longer-than-expected walk along the river to the Attenborough Nature Reserve and back across the meadows, with a short diversion to the M&S food hall for ice-creams and lemonade. We had planned to leave the pontoon around five-ish and join Bob and Mandy, who were now moored on the Cranfleet Cut, but when we got back the idea of getting the deckchairs out on the pontoon and spending the evening watching the Mighty Trent drift by as the sun went down was just too tempting.

We turned up the next morning and tied outselves up while the rest of the boating world was still half asleep. 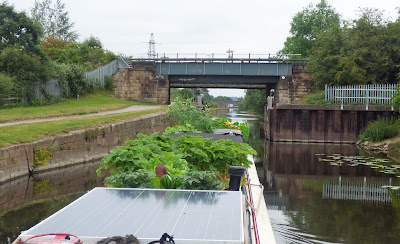 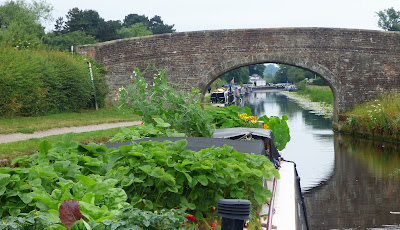 Under the footbridge to moor up behind Matilda Blue. 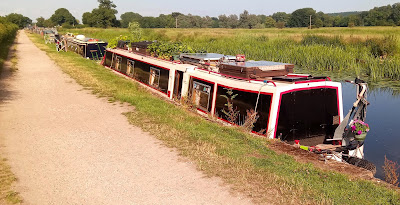 Together again.
We were about half way along the cut between the floodgates and the lock with a lovely view over the meadows. We’ll be here for a while, Dave wants to take some of the windows out, re-seal the frames and re-position the glass, so having a high bank will help. Also there is a fair amount of rain on the long range forecast so being on a lock cut might prove useful.
Part 2 coming very soon.
at July 10, 2021