It was not without trepidation that we turned into the full force of a very full River Thames at the end of Dukes Cut. 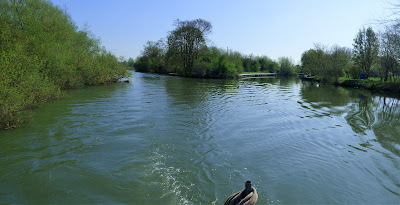 Despite the EA website showing amber “Stream Decreasing” warnings all the way up to the head of navigation, the last lock we’d come through had been displaying a red “Strong Steam” warning board. We’d decided that if it was all too much then we’d just turn round and go back to the safety of the Oxford canal for a few more days. However, with the Lister turned up from it’s usual “Noisy” to “Quite Noisy”, we ploughed our way up to Eynsham in the glorious spring weather. 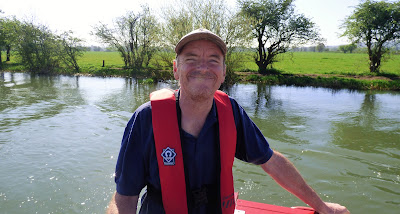 Unlike the three other boats that arrived at Eynsham that day, we managed to impress the lock keeper by not being slammed into the lock landing by the ferocious weir on the other side and, as there were 24 hour moorings, tied up for the rest of the day.

After lunch we took one of the little pamphlets about the lovely village of Eynsham itself and went for a walk. When we got back to the boat there was, on the opposite bank, a gathering of what must have been every single teenager for miles around, all taking advantage of the unusually balmy afternoon. Some of the braver ones were taking it in turns to jump or dive into the river from ever more daring places, the final winner launching himself into the turbulent water with a spectacular back flip from an overhanging tree. However the rest of them were happy just to lie back on the grass chatting and soaking up the rays. When they all turned up we had (unjustly) expected a noisy night, but we were pleasantly surprised by how well behaved they all were, and by how little mess was left when they all went home.

After tea we went for a short walk up the river and saw our first swallows of the season. 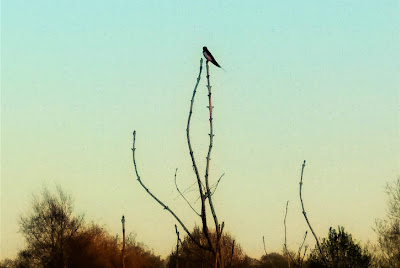 All in all, a fabulous first day on the river. 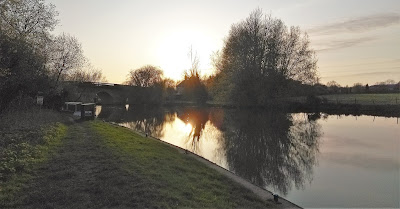 The next day was glorious again and littered with lambs, goslings and calves, making us believe that spring had finally sprung. 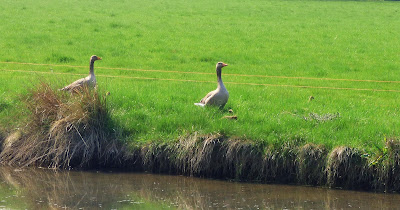 At Shifford lock the downstream landing was underwater, but thankfully it was manned, so Ann-Marie didn’t have to go paddling. 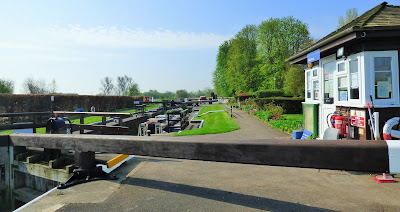 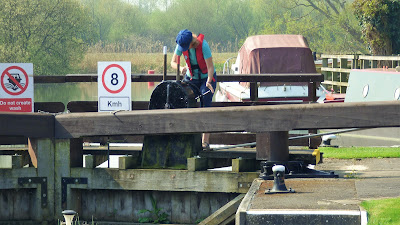 A mile or so further on we moored up with the bedroom hatch right opposite a swan’s nest at Chimney Meadows.

After lunch we went for what was supposed to be a circular walk to Duxford and back, but due to a rather large portion of the river going across the ford at Duxford... 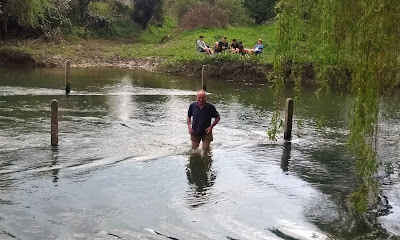 ...we had to double back, making our circular route more of a wiggly spiral.
Dave & Kate were coming to join us for a couple of days boating and we’d arranged to pick them up from the Swan Inn at Radcot Bridge, so we got up bright and early. Ann-Marie made a batch of scones then we cast off, punching our way up the twisty meanders, through Rushy and Radcot locks... 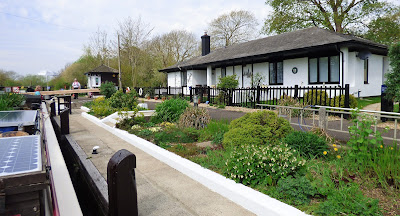 before pulling up outside the Glamping Tepees at Radcot. Dave & Kate arrived at almost exactly the same time... 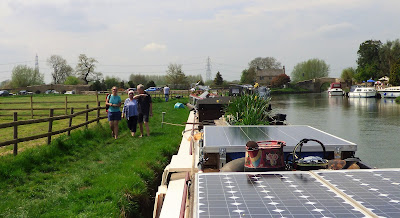 ...so after taking a couple of photos of the goose nesting in a tree on the opposite bank... 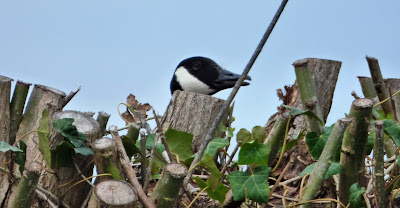 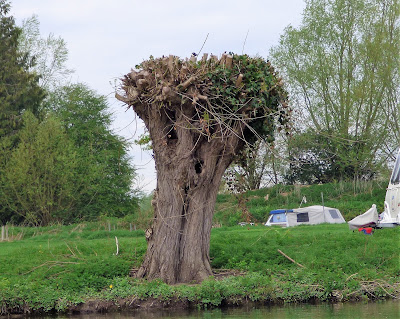 ...and with a swift cuppa inside us and in a true stereotype formation of girls in the front and boys at the back we were off again. Dave turned the Morse control to “Really Noisy” and we charged towards the narrow Radcot Bridge through which the whole of the young, lively, (and on that day very swollen), river Thames was rushing to meet us. When the girly end reached the bridge we'd probably got up to about 6 knots, but by the time the boy’s end got there we were we'd nearly stopped. With a final spurt of “Deafening” we popped out like a cork and carried on up the river. Good old Legend.

That night we moored up at Kelmscot... 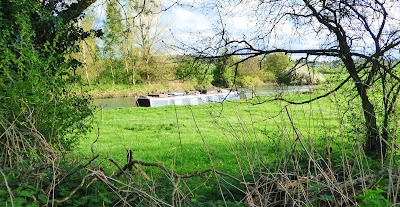 ...and had a little walk into the village and a pint in the pub, then the next morning headed for the limit of navigation at Lechlade. (There is a right of navigation all the way to Cricklade, but not for 57’ narrowboats) After mooring up for brunch on the pasture... 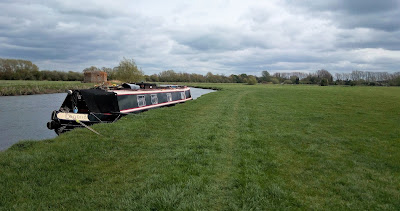 ...and having a walk around the town, we got back to find - to our relief - that the big herd of very frisky bullocks had not been able to get through the rather flimsy looking gate and therefore had not tried to climb onto the roof of our boat and eat the pansies, something they have developed a reputation for. We set off upstream for the last time, went under Ha’penny Bridge and performed the first of what would become many turns in the river... 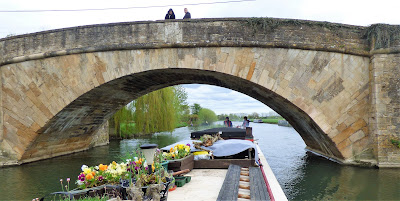 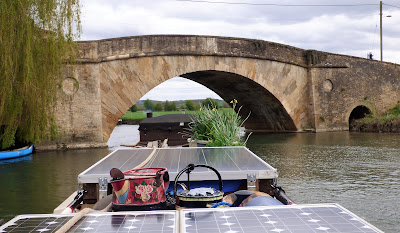 ...before returning to St John's lock... 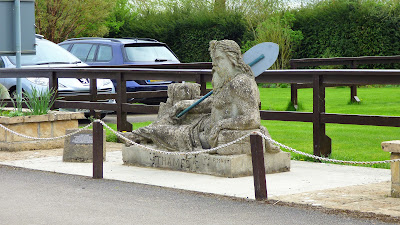 ...and meandering our way back down stream.

The water was still flowing really fast, making the river a bit of a toboggan ride.
Dave soon got the hang of it, although there were several moments - as Legend crabbed sideways around yet another hairpin - when he was eternally grateful there was nothing coming the other way!
Fortunately, with so many meanders and switch-backs on such a wide floodplain, we could see approaching boats going back and forth across the fields for quite a long time before we got anywhere near them. That night we found a lovely sheltered mooring at Buscot and had tea out on the towpath.

In the morning we were up and off straight after breakfast and got back to Radcot just before the weather turned. After a really good lunch in the Swan and a game of triv back on board, we had to say goodbye to our friends and waved them off before tucking ourselves in for the night.

Over the next couple of days, as we made our way back down the upper Thames to Oxford, the weather was mostly breezy with occasional rain. Not the best for boating. Indeed, a huge gust very nearly took the boat out of our hands at Northmoor lock and we had a real struggle getting moored up at Bablock Hythe. Ann-Marie had to leap over the nettles and lash the front rope to a tree while Dave tried to balance the boat between wind and water.

This photo was the next morning when it was a different world.
In no time at all we were back down to Duke's cut...

...where we shared King's lock with Nb Mr Toad. 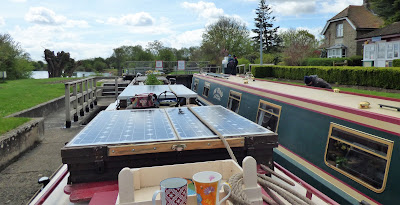 They weren't altogether happy, as they'd wanted to do what we'd done and go to Lechlade and back, but the wind and flow had put them off, so they'd turned round and were now heading back to the Oxford canal.
Our first glimpse of Oxford's dreaming spires included one that we're sure wasn't there in Matthew Arnold's day...

...but it was beautiful and exciting non-the-less.
The lowest bridge on the Thames is at Osney in Oxford. On the plus side, this means that none of the big gin palaces can get to the upper reaches, but on the down side, after the recent rise in river levels, we weren’t sure we’d get under it either. So at Eynsham lock we pulled over, took all the big pots off the roof, then emptied the big box and flattened it before carrying on. We needn’t have worried, there was plenty of room... 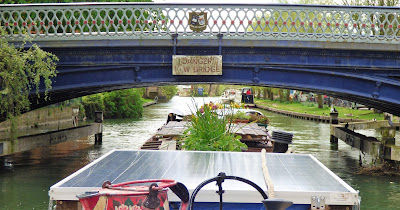 ...but precautions like that are always worth the effort; getting to a bridge in a fast flowing river only to find out that you are too high to fit under it is the stuff of the most frequently viewed  Youtube videos.