We can't get enough of these Fenland Skies! 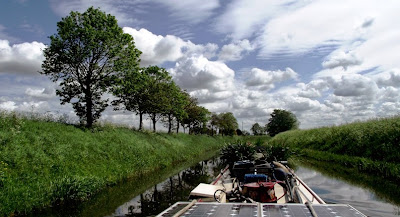 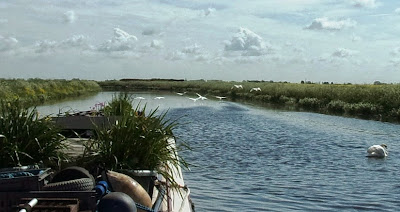 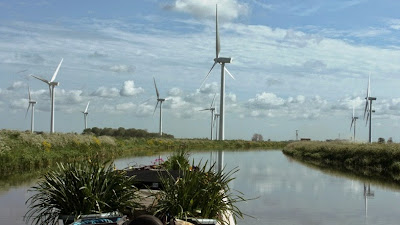 Our second failed attempt at navigating to Holme Fen resulted in an unexpected night at Benwick, which was also where Martin and Yvonne were heading. So two hours after we all waved goodbye and wished each other a happy summer for the second time, Legend and Evolution were breasted up beside each other...

Again.
They can’t get rid of us that easily. We had an on board scrabble evening, which the boys won (subject to a steward’s enquiry),  then in the morning we all said goodbye for the third, and almost certainly final time until September, and waved them off. 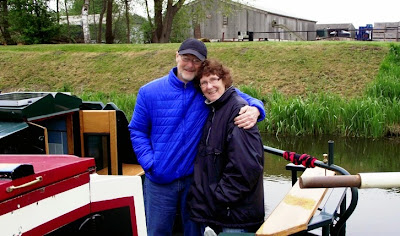 As a thank you to the Benwick in Bloom society, Dave set about weeding and tidying up the flower beds round the mooring till lunch time. 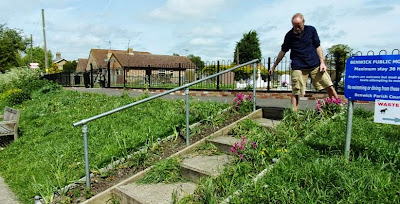 We'd invited Glen and Holly for lunch, we were expecting them any minute when we got an extra pleasant surprise and Ron and Rose dropped by to say hello as well. Lunch for four became lunch for six and two doggies.

In the evening we were back at Ron and Rose’s for dinner again. It’s lovely to spend time with people who we’ve only really met in bigger social gatherings and really get to know them.

Our next boat move was across the Greenwich Meridian, past Foxes' hire base and under the busy A141 into March. 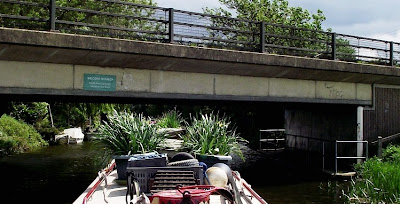 On the way we went past this, which just goes to show that even the people who live here put an 's' on the end. 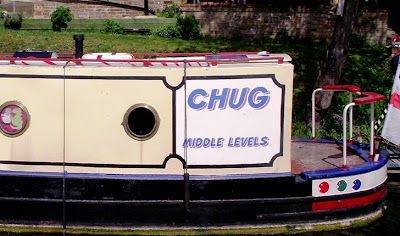 We snuck in on a perfect Legend length mooring gap at Parkside and had a wander round the town. In one of the charity shops we found an exact match for a mug that got broken last year. 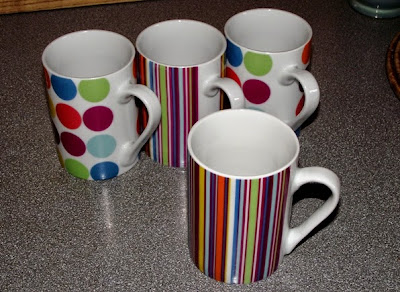 The next morning we had two short hops, first to the sanitary station opposite the library, then under the bridge to moor on the town moorings.

This was a nice place to be, although we were right in the middle of town, so it never got really dark at night or, with roads running past three sides of us, really quiet either. Over  the next few days, as we boated across the breezy landscape from March, through Marmont Piory Lock and on to Upwell, Outwell and Nordelph, we found the same thing; although the Middle Level is open and wide and empty with stunningly beautiful big skies, unless you own a bit of accessible river bank or you know someone who does, the only places to stop are the public staithes. These are all nicely kept, but of course they are all in the towns on the way, they all have busy roads next to them and they are all subject to 36 hour limits. The crews of most boats that pass this way are using the Middle Level Navigation as an Ouse - Nene through route, to be completed as quickly as possible, so one or two overnight stops near a pub or a shop or a chippy is exactly what is required. We, on the other hand, upon this voyage of discovery that we have found ourselves, prefer a more sedate progression.  Maureen, the lock keeper at Marmont Priory, wanted to know if we’d like her to phone the lock keeper at Salters Lode to find out when the next tidal passage was. When we told her we wouldn’t be going out onto the Ouse until the following week she was quite taken aback. “Where are you going to stay?” she asked.
Well, we had one night in Upwell...

...alongside the lovely flower and vegetable beds tended by the Well Creek Society, followed by a busy couple of days at Outwell. After a tour of the local nurseries and DIY shops, Ann-Marie planted up our flower troughs for this summer, while Dave took advantage of the low bank and gave the tumblehomes  a rub down and their annual lick of paint. Shortly after we’d turned the boat round and finished the second side, and while we were having a delicious congratulatory chippy tea, a chap with a strimmer came along and before we could stop him, splattered it with grass and nettles. (The boat, not the chips.) The poor bloke was desperately apologetic when he found out, but it wasn’t his fault and in the morning we had a good look at it and it wasn’t that bad; we may need to re-do the front bit but no lasting harm was done.

Years ago, before we started this boat life, and when we were still trying to decide how we were going to even begin becoming water gypsies, we met a couple through a canal forum who live near Outwell. Martin and Chris used to own Nb Heather Bell, a historic oak-on-elm Nurser, that was used during the war to train the “Idle Women”. Very interesting people and very knowledgeable.  We’d kept in touch over the years so when we got to Outwell we invited them over for lunch aboard the boat. It was great to see them and really good to be able to finally show them our home.

From there we went over the Mullicourt Aqueduct, which takes Well Creek across the Main Drain... 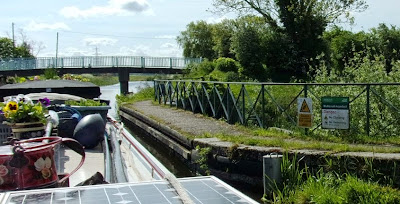 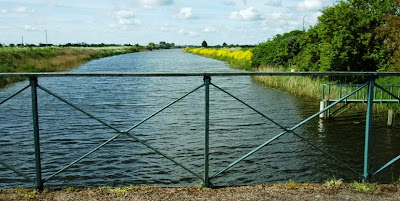 ...to Nordelph where, just after the very low bridge (that isn’t on the map!) the public mooring is a well-kept secret.

The sign is broken, the staithe is only about 35’ long and we were slightly concerned that if another boat came past us Legend would rip the mooring rings out, so we tied to a couple of trees. Having said that, it was a very pretty place to be. 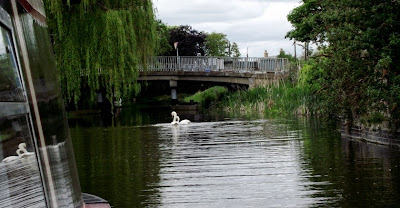 On the Sunday we took the car to Denver Sluice and had a good look round, found out where the EA moorings and the water point were, had a quick chat with the lock keeper about how the tidal passage worked then left the car in the carpark and walked alongside the relief channel to Downham Market, over the bridge and back down the Ouse to Salter’s Lode. After a quick recce there, we carried on along the Well Creek bank, back to Nordelph. The times for lock opening on the Tuesday and Wednesday were going to be 9:45 and 10:15 respectfully; so on Monday morning we took the boat to the mooring at Salter’s and kept a close eye on the weather forecast. 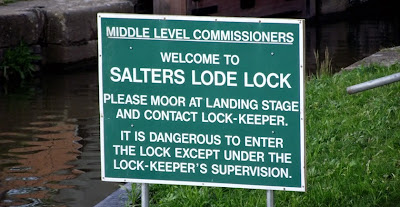 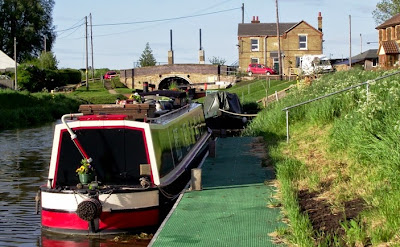 When we got up this morning (Tuesday) there was a strong gusty breeze blowing in entirely the wrong direction, bringing with it the threat of rain. Dave and the Lock Keeper had a little conflab and decided that it really wasn't ideal boating, or locking weather, and going out tomorrow would be a much better idea.
at May 19, 2015

I have no doubt we will meet you tomorrow either moored up or passing! :D