While Legend was moored at Hatton station, there was enough spare room on the towpath for Dave to get the workmate out and become creative. 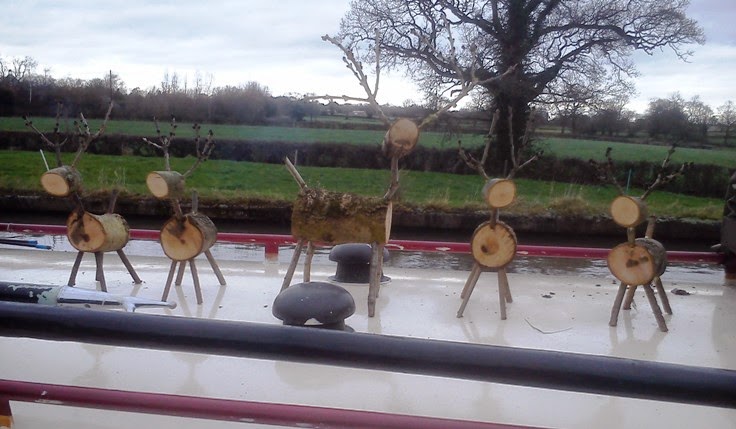 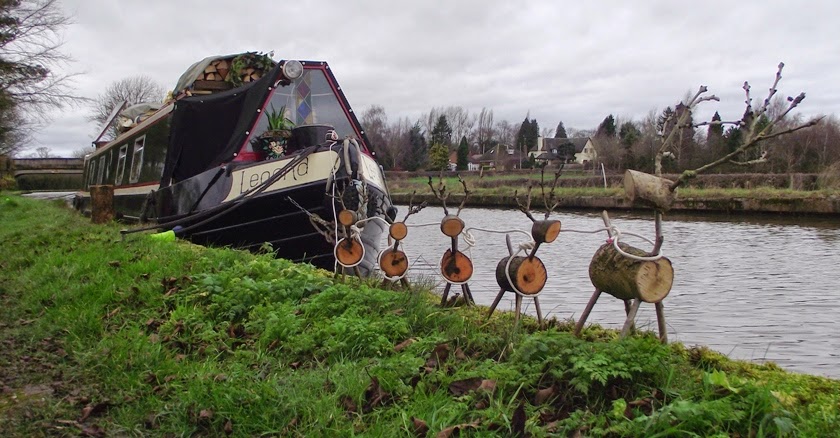 We had them on the towpath like that for about a week. They made everyone smile and we were pleasantly surprised that, apart from four of them getting blown into the canal one night, they all survived unharmed. We named them Ashleigh, Willow, Hazel, Holly and Rose. As Christmas approached we gave them away to our friends and family, until there was just Ashleigh left, then he got taken to Anne’s on Boxing Day.

Over the weekend before Christmas Eve, we embarked on one of our mad dashes around the country in the car, spreading as much Christmas Joy and wooden reindeers to as many relatives as possible.
Since we last went to visit her in Cornwall, Dave’s sister Kate has moved to the other side of Penzance, and is now within spitting distance of Land’s End. At this rate she’ll be on the Scilly Isles by Easter. We broke our journey down there by visiting John who, while still living in Cornwall, at least lives in the bit before the grass starts appearing in the middle of the A30. About 8 years previously we had joined John and Kate for a week on a Chas Harden hire boat on the Llangollen 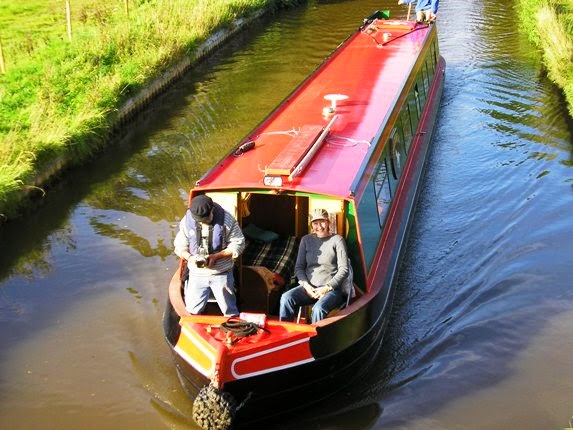 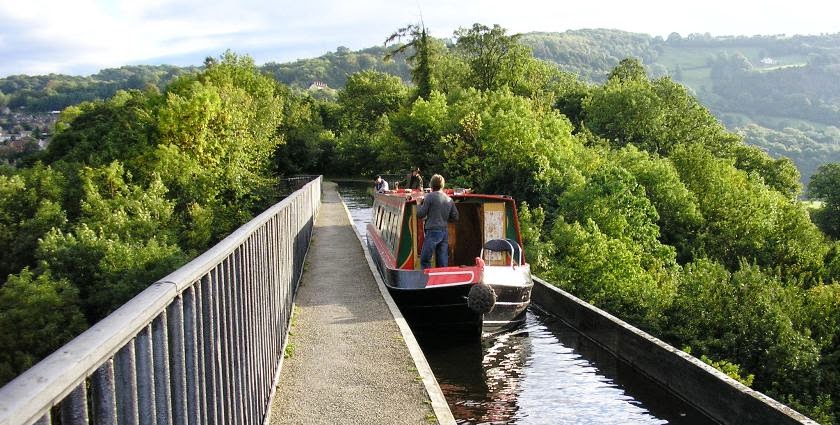 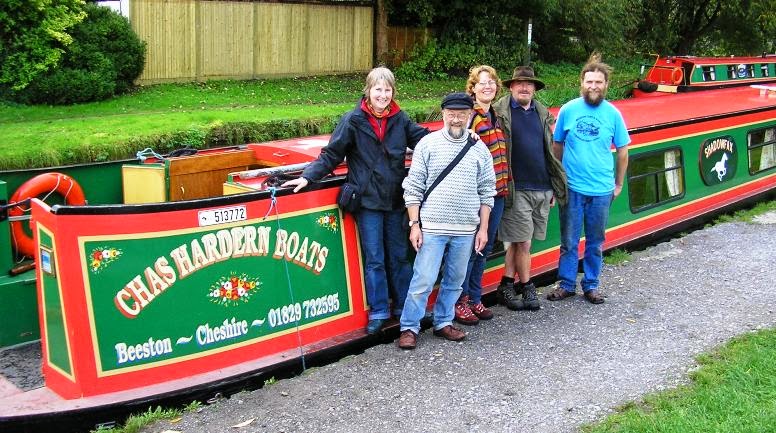 We were shocked and ashamed to find out we’d not seen John since. He’s a smashing bloke and often replies to Ann-Marie’s round robin e-mails and it was lovely to spend some time with him.

An hour’s drive further on found us at Kate’s new flat, high up on the last sticky-out bit of Cornwall with amazing views from every window. We had a terrific time with her and Rod; lunch overlooking St Michael’s Mount, an early evening stroll around the Angarrack Christmas Lights, which have to be seen to be believed. 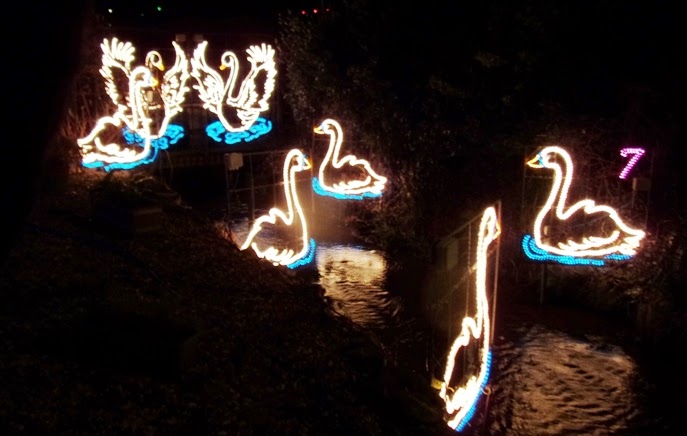 These are the Seven Swans a-Swimming in the river, to see all the other days of Christmas - and all the reindeer - click on the link above. That was followed by soup and garlic bread back at the flat. It doesn’t get much better.
We were back on the A30 straight after breakfast the next morning, and waving at Stone Henge around lunch time. It hadn’t occurred to us that we’d be going past it on the day of the winter solstice; luckily the four mile queue was on the southbound side of the road.

We arrived at Mychett just after 2pm and spent a very enjoyable afternoon and evening with Karen, Andrew, Lauren and Ben. One of the reindeer was rehomed at Karen’s; we’re sure it will be very happy there.

Next day we were in Fleet to see Mum and Dad and rehome another reindeer, then back up the A34 to Warwick as it got dark. We got a big bundle from the chippy and pulled into the station car park about a minute ahead of Frankie, Harry and Iggy (their dog), who were staying on the boat with us for a couple of days. 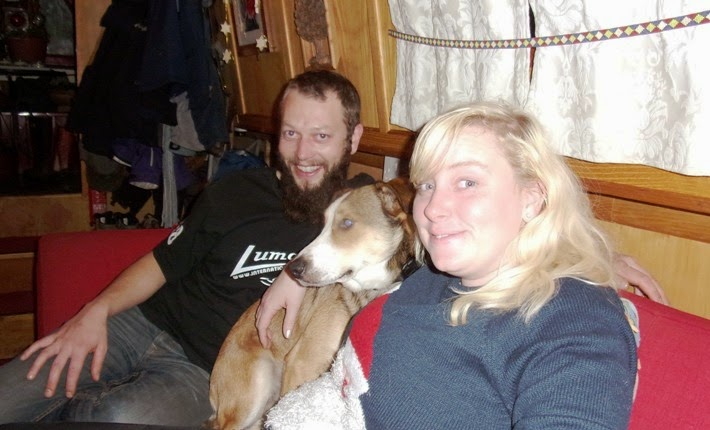 We’d come from Cornwall via Hampshire; they’d come from Bordeaux via Stowmarket and Boston, and we’d  all arrived at the same place at the same time. A triumph of logistics which once again had us wondering how anyone on a boat managed to do anything before mobile phones.

Dave had everyone up bright and early the following morning, the day before Christmas Eve, with cups of tea all round, and we were on the water point at the top of Hatton Locks by 9am. While both the water tank and the top lock were filling up Ann-Marie dished out the bacon butties then, with Harry at the tiller, Legend glided gracefully into her first wide lock since we turned onto the Middlewich branch in April.
We were just about to shut the gate when we spotted another boat  coming down the cut behind us, so we got to share the whole flight of 21 locks with a lovely couple called David & Judith who were on holiday over Christmas on a hire boat. 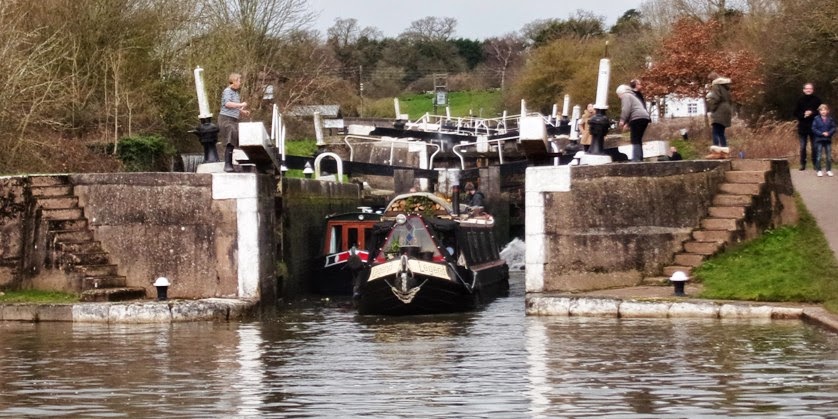 With Harry & David steering, Frankie and Iggy dropping paddles and shutting up, Judith staying with the boats and us leapfrogging each other to set ahead, we got down the whole flight in less than three hours. Three years ago, when we went up, despite being excited by the prospect, we were rather daunted by Hatton. We put the call out to all out mates and relatives and ended up with a crew of about 15. It was fantastic fun, and we wouldn’t have done it any other way, but it just shows what we’ve learnt. With six people and two boats we made going down look very slick and easy.

Whilst chatting on the way down, it transpired that Judith and David had gone to the little shop on top of Shrewley tunnel a couple of days before in order to get stuff for Christmas dinner, only to find that they‘d sold out of potatoes. In our book, and no doubt yours too, not having roasties alongside the cranberry sauce and the crappy crackers is a crime of such heinous proportions that a satisfactory sentence has yet to be devised. So, when we were all done with engines and moored up at the Cape of Good Hope, Frankie was despatched with a generous helping of Large Whites to rectify the situation. Being such lovely people, David and Judith felt that an exchange of goods was called for and generously repaid us with some amazingly mouth-watering Italian cheese. Despite being told several times, we repeatedly failed to remember what it was called. However, we had it as a finale to every meal after that until it was all gone, and we had no doubt whatsoever that it was worth several sacks of potatoes.

On Christmas Eve morning we all went out for a little walk with Iggy, then in the afternoon Kim, Luke and George came over with a very tempting-looking and beautifully presented selection of home-baked Christmas fayre.

After less than three weeks of intensive crawling George had grown bored and had decided that walking was the only way forward or, more accurately, sometimes forward, but more often than not a sort of wobbly sideways motion while gripping bits of furniture.  An intensely determined toddler, however wobbly, is a force to be reckoned with and the confines of our little boat did nothing to improve things. Our Ecofan, as far as George was concerned, was the most desirable object on his bit of the planet, and he spent a good deal of his seemingly endless energy trying to breach every obstacle we put between him and our very hot fire.

When all the youngsters had gone we snuggled down to watch a film before hanging our stockings up and making sure we’d left adequate provisions for our expected nocturnal visitor. 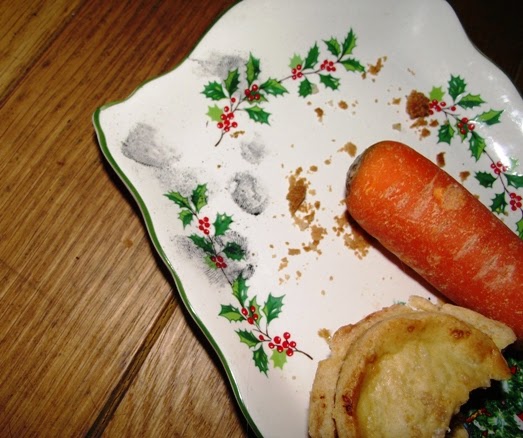 In the morning the evidence was clear:  HE’D BEEN! Sadly the fingerprints were too smudged to provide an accurate ID.

Later in the day, after a traditional Christmas breakfast, 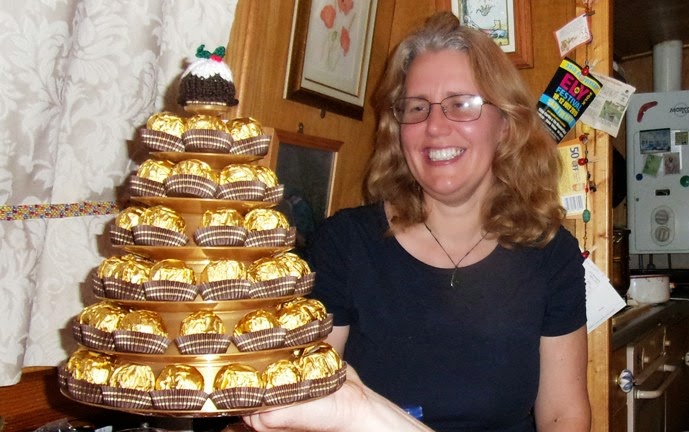 we joined David & Judith to go down the two Cape locks. Well that was the idea, but as there were several boats moored at the bottom we stopped in the pound. Not our usual habitat, but it was a big pound and we figured we’d be safe enough. We helped our new friends through the second one then said a fond goodbye. They were going on into Leamington, and then turning round to return to their hire base on the Birmingham and Worcester. We would have liked to have helped them back up Hatton on Boxing Day, however we had other plans.

Shortly after the Queen’s Speech our friend Coops came to stay. We haven’t seen him for ages so it was great to be able to chat and catch up on each other’s stories.

We spent Boxing Day in Chesterfield at Dave’s sister Anne’s house. While we were there Chloe and Shandy dropped in and so did Judith and Vince. Richard, Kathryn and the kids were going to come along in the evening but by seven o’clock it was snowing really heavily and they didn’t make it. About four inches of snow came down over Chesterfield that night; Chloe and Shandy only just made it to their digs and Judith and Vince got stuck in the ensuing hold-ups, getting home about half past midnight. We went to the pub. The snow was film-set perfect; big fluffy flakes piling up to make a thick powdery blanket that flew up when we kicked our way through it and made satisfying creaks  when we walked on it. 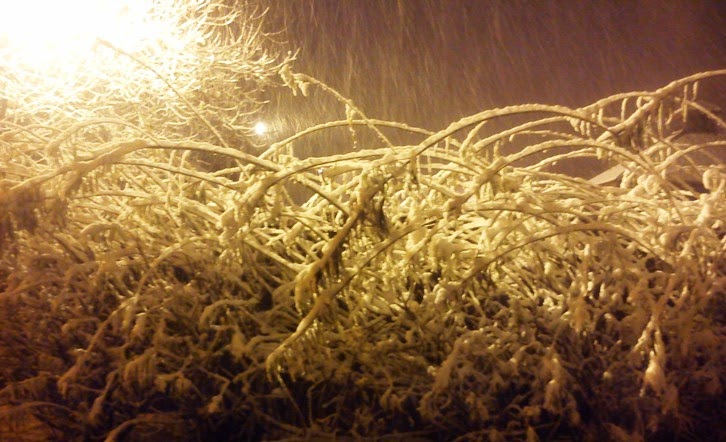 As we crossed the green we started a couple of snowballs and within ten minutes we’d built a snowman that was taller than we were. 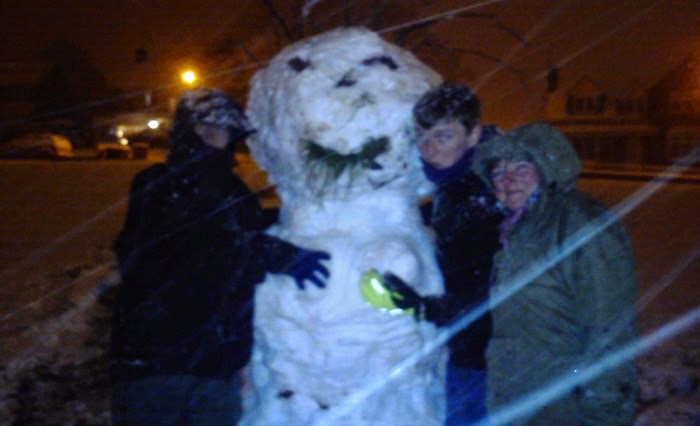 In the morning, looking out at the thick pile on top of the car, we were a bit apprehensive about getting home, but as it turned out there was nothing to worry about; the M1 was heavy but moving and as soon as we turned onto the M69 all traces of snow disappeared.

Legend was freezing when we got home, but not for long; we’d got a new toy. 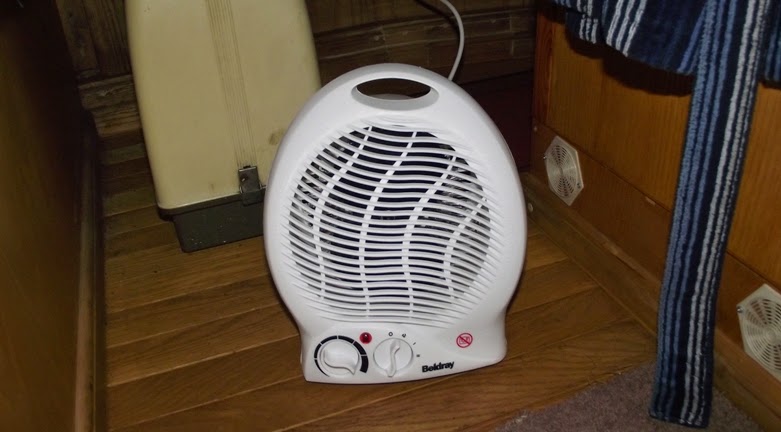 Our normal routine when we get back to the boat after a couple of days away is to light the fire and run the gennie for an hour or two to charge the batteries while it’s warming up. We figured that having a little fan heater in the bedroom while the gennie was on would help. It does. We’re now on the look-out for an electric blanket.

In our post collection from Anne’s was a pair of these. 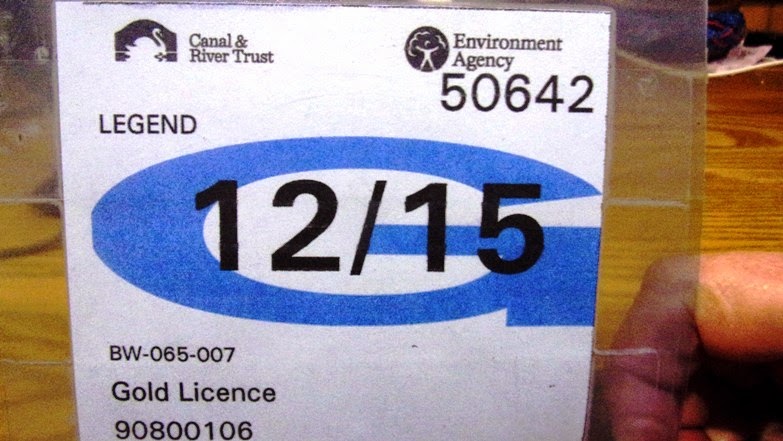 We can now navigate nearly everywhere for a year, including the Nene and the Great Ouse, where we intend to spend most of it. As you can see, our latest attempt at preventing our licences from turning to a soggy mush while they’re stuck in the window is to seal them onto a piece of plastic with heavy duty tape. Not quite as good as lamination, but hopefully good enough.
at December 30, 2014