As this is supposed to be a boating blog, rather than a catalogue of our social gatherings, here’s a few of the things we’ve done to improve Legend just recently.
There are some very nice Turk’s Head knots on the Swan-neck along with a new tiller tassel. 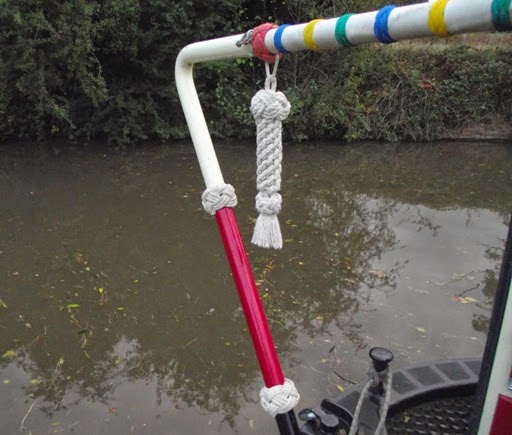 The tiller tassel attaches to the tiller-pin that goes through the hole in the tiller arm when it is on the tiller, keeping it in place. We don’t have a hole, therefore we can’t have a pin, but Dave made a tassel anyway. If we ever find something that we think would make a pretty tiller-pin, then no doubt a hole will be drilled. That will be an interesting exercise; a perfectly vertical hole through 1½” mild steel bar. Don’t hold your breath.
There’s a new tray that fits on top of the rear slide while we’re cruising along for holding phones, maps, cups of tea etc. and has posts for the centre ropes. Very usefull.

Inside, we’ve swapped the lights in the bedroom for those in the dining room. One of the first things we did when we bought the boat, and something we’d encourage anyone else to do too, was to change all the halogen bulbs for “warm white” LEDs. However, as is the way with all things marine, you can’t just go on line and order the cheapest ones. Unlike a house, where 12volt power comes from a transformer and is constant, the voltage on a boat can vary between 11.7v and 14.6v depending on what else is happening, so our bulbs have a built-in voltage regulator and can cope with anything from 10v to 30v. (That means they would even be suitable for a 24volt system, should we ever feel the need to change.) Which of course meant they weren’t cheap, and there were 20 of them, so we got the smallest ones that each of the fittings would accept. This meant that the bulbs in the main cabin only had 6 little cubes each, while the 3 bigger fittings in the bedroom had 12. Most of the fiddly, intricate stuff that goes on in the boat, be it needlework, model-making, painting little things, knotting, beading or what-have-you, always goes on at the dining room table so that’s where the brightest lights ought to be. We’ve known this fact for 3½ years and finally got round to doing something about it.

Of course it wasn’t just a straight swap – the holes were completely different sizes - which meant making a) some conversion plates for the bigger holes and b) an inordinate amount of sawdust with a hole-saw all over the bedroom for the smaller ones. It has been worth it though and another step closer to getting Legend just perfect.

Kim and Luke live near Nuneaton so have been regular visitors since we came onto the Coventry, and will remain so right into next year when we head out to Northampton and the River Nene. They’ve agreed to store our planters and flower tubs over winter after Legend has been out of the water to give the roof paint a chance to harden off properly. That is, of course, if it’s not too cold to actually paint it. It’s only three weeks away so we’ve got our fingers crossed. We come out on Halloween, we’ve booked a survey for Saturday morning after which we’ve got until the following Friday to black the bottom, paint the roof and do anything else we have time for. Our insurance company want a survey doing every 6 years as the boat will be over 25 years old at the next renewal date, Coombswood hire out the slipway by the week, so it makes senses to do as much as we can while we’re out of the water in a shed. Being in a shed means we can’t light the fire, but this time we’ll be prepared, Norm and Jude have offered to lend us a couple of oil filled radiators and we’ll borrow a fan heater as well. Toasty!

Kim and Luke are in the process of buying their house, so there’s plenty of DIY to do. Dave gave Luke a hand to dry-line the small bedroom to make a nursery for George and he’ll help with the coving at some point as well. Luke wouldn’t usually need any help, but he’s just had surgery, so he’s not fully up to speed at the moment. All this visiting meant that Ann-Marie got lots of baby cuddles with George, and it meant we got to watch the final of Bake-Off at the same time as everyone else.

Anne’s daughter Jen was at home when we went to pick up our post and we realised that she’d never been to see the boat, so the next morning they both followed us back to Stoke Golding for a day on board. We went on a 6 hour cruise all the way to the end of the Ashby, turned right onto the Coventry, through Nuneaton and pulled up at Hartshill, just by the maintenance yard and its beautiful clock tower. Yes, right where we’d visited Happy Daze the week before. Jen was very impressed with it all.

Hartshill was a very useful mooring; there was a little car park right by the bridge and a water point, both of which we made full use of before we left. 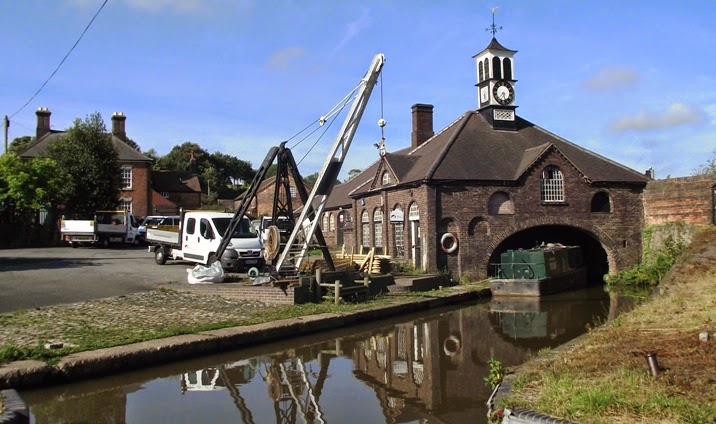 Karen, Andrew and Ben came up one evening and we all went out for a meal. It would be nice to say that it was our scintillating company that persuaded them to sit in a car for six hours, or perhaps the attraction of the menu at the Stag & Pheasant (Lasagne, Spag bol or pizza.) but no. Ben was sussing out universities and Derby was on his list, so after looking around the halls and campus we were deemed to be worth a half hour diversion at least.  Don’t think for a moment that we were at all disappointed in the pub, we’re great fans of a limited menu; we’d much rather peruse three choices written in chalk on a blackboard in words we understand, knowing that everything has been cooked today no more than 20 feet from our table, than flick through endless leather-bound pages of meaningless adjectives describing a freezer full of boil-in-the-bag, overpriced scrag-end. We can happily report that Italian Night (every Saturday) at the Stag & Pheasant is worth a visit, as is Curry Night (every Monday) when we went with Chloe.  Just don’t expect soup.

Kim, Luke and George joined us when we boated from Hartshill down the beautifully kept Atherstone flight to Polesworth. It was George’s first proper boating day and he thoroughly enjoyed all the wavy water and the ducks, although what he seemed to enjoy most was our mattress and a throbbing Lister; this he made abundantly clear by sleeping for two hours on the former while less than three feet from the latter. 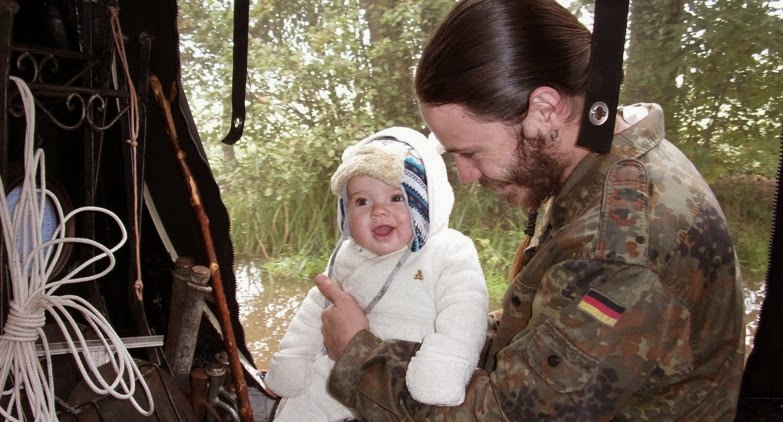 We reckon he’s got diesel in his veins.

Polesworth is a lovely spot; 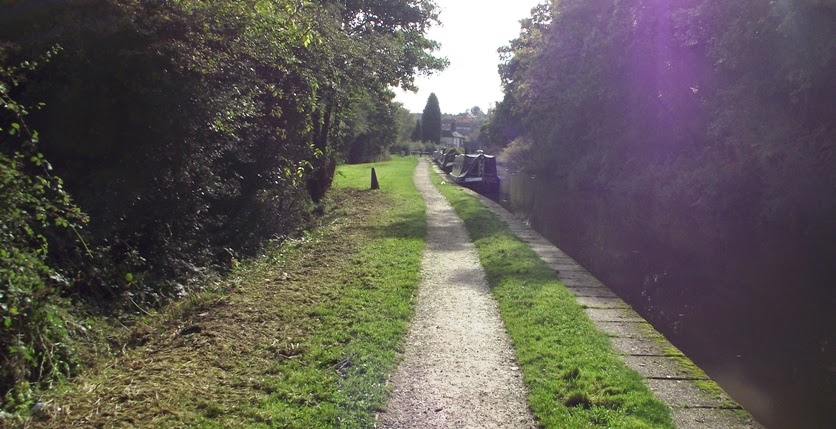 it’s got shops a short walk away, there’s good parking and it’s very sheltered (a fact we were thankful of when the tail-end of Hurricane Gonzalo came along). It used to be surrounded by coal mines, the remains of which, and their associated spoil heaps, are now nature reserves with some lovely walks through them. 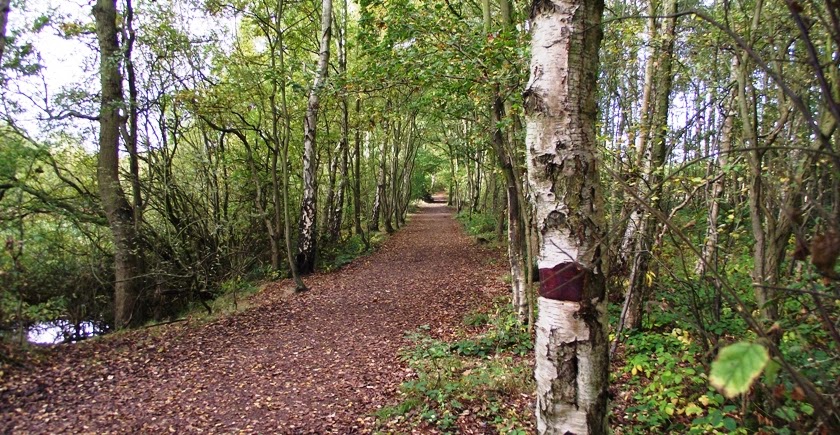 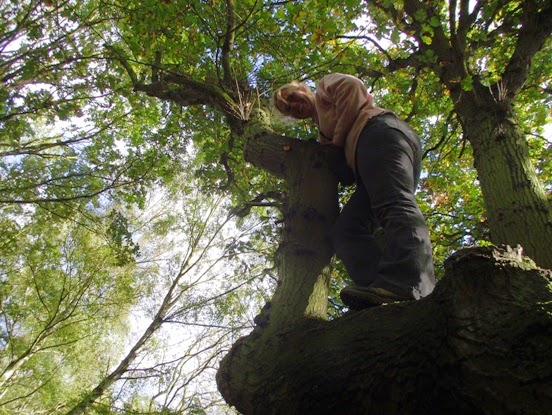 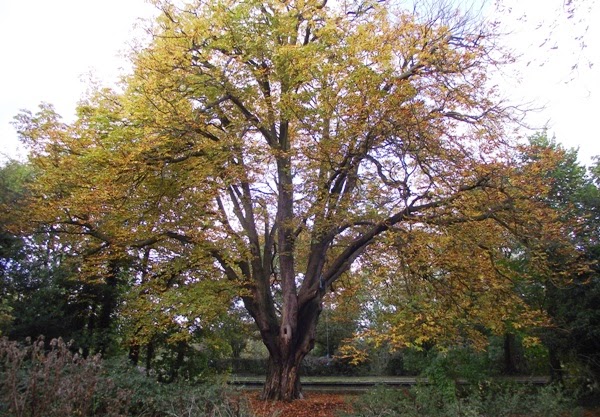 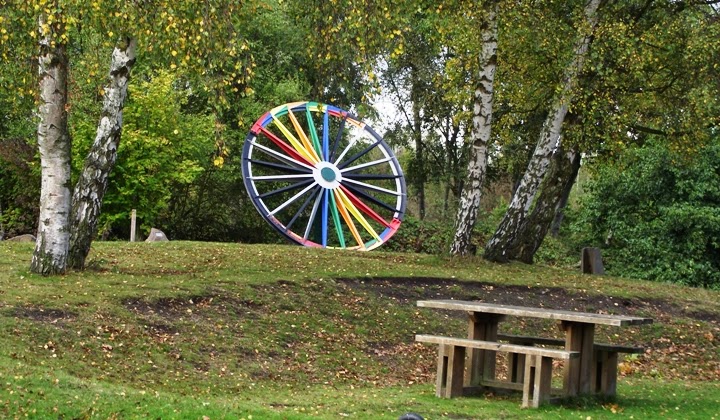 At the top of one of the old slag heaps is this. 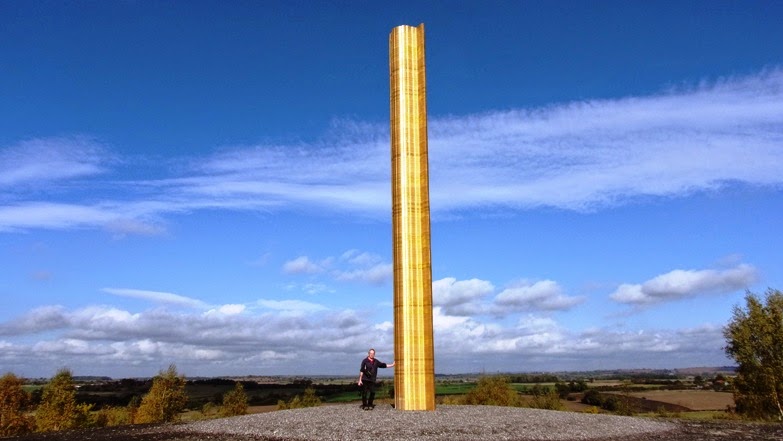 It is made to look like thousands of gold leaves on top of each other, we think it might represent the wealth made by the ancient forest that metamorphosed into coal under the ground here, but it could just as easily be a massive tooth-pick. This is what it looks like from the bottom. 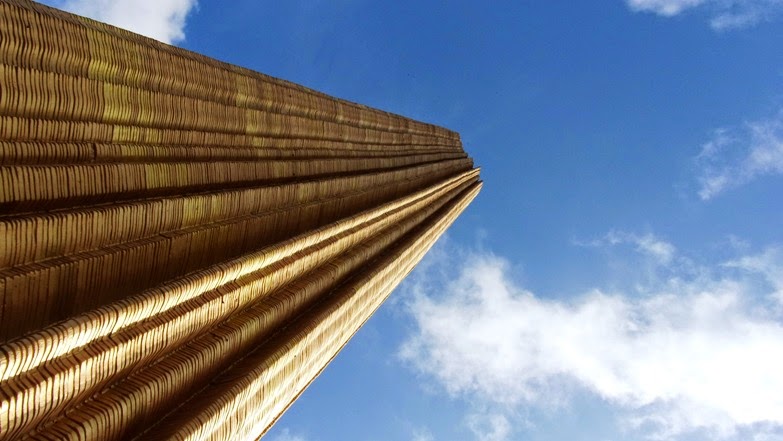 And this is what Ann-Marie looked like taking that photo. 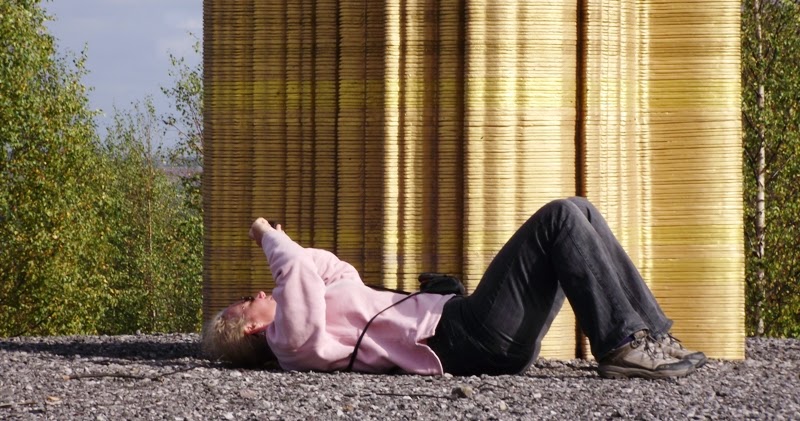 Nice tassel. I do love a bit of knottage.