One week within walking distance of a Morrisons was quite enough, so we fired up the Lister once more, chugged back through the Leek tunnel to Hazelhurst and dropped down the three locks onto the main line and then went under the aqueduct that we’d just gone over. 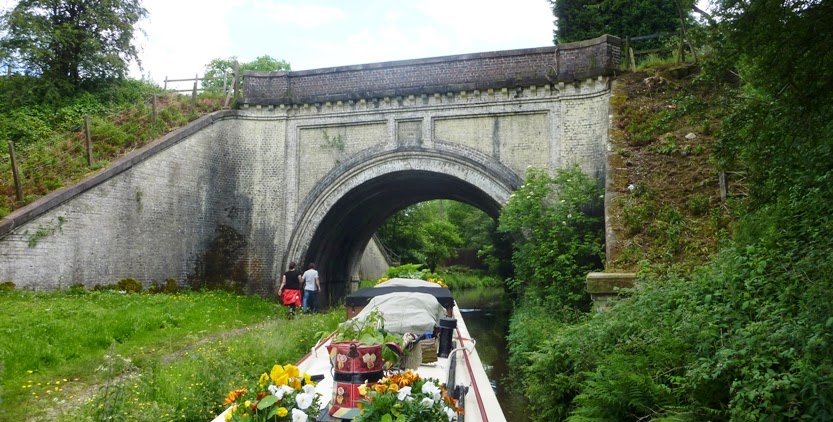 The Caldon got better and better as we wound our way further down the Churnet valley towards the terminus at Froghall Basin.  We stopped at Cheddleton, 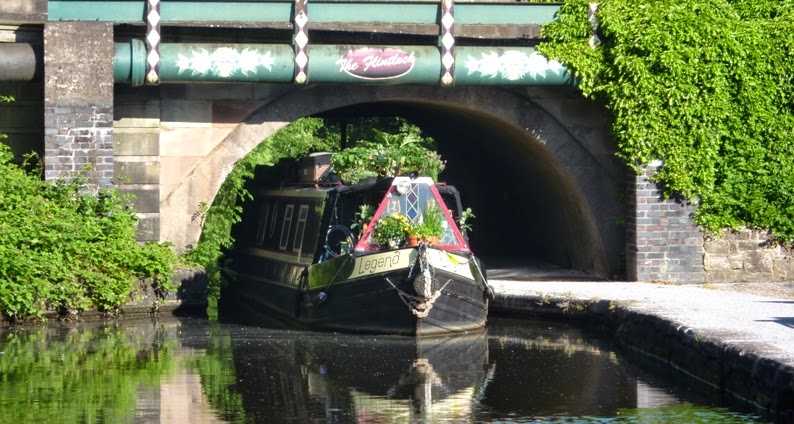 where there is a restored water powered flint mill. 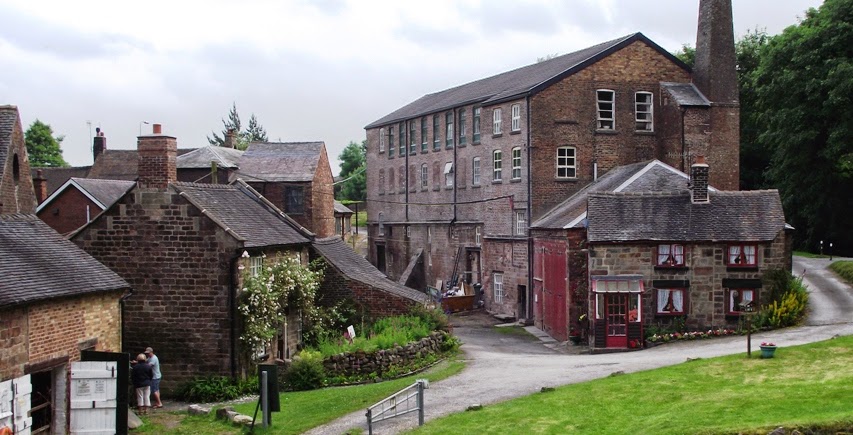 Flints used to be shipped round the coast from Devon and Cornwall up to Liverpool where they were transferred to narrowboats and brought along the T&M. At Cheddleton they were crushed into slurry, baked into blocks and loaded back onto the boats for onward transport to the potteries in Stoke where the powder was mixed into the clay to improve the durability of ceramic goods as they were fired. 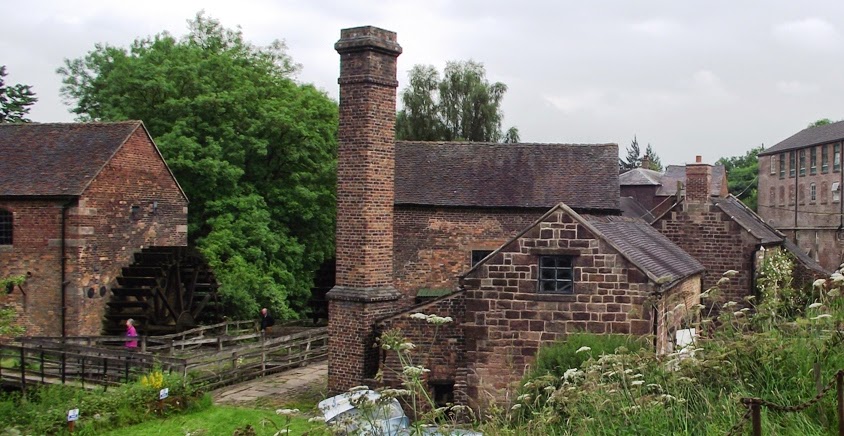 It’s a fascinating place; both the wheels work and there’s lots to look at.

The canal joined the river for about a mile and a half just before Consall Forge. 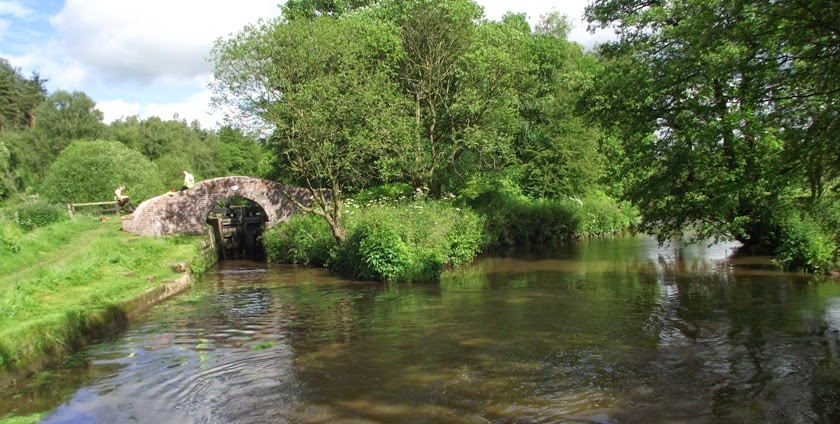 After the weir the river, railway and canal were all crammed into the little valley and the cut was very narrow; at one point we found ourselves underneath the cantilevered station platform and waiting room. 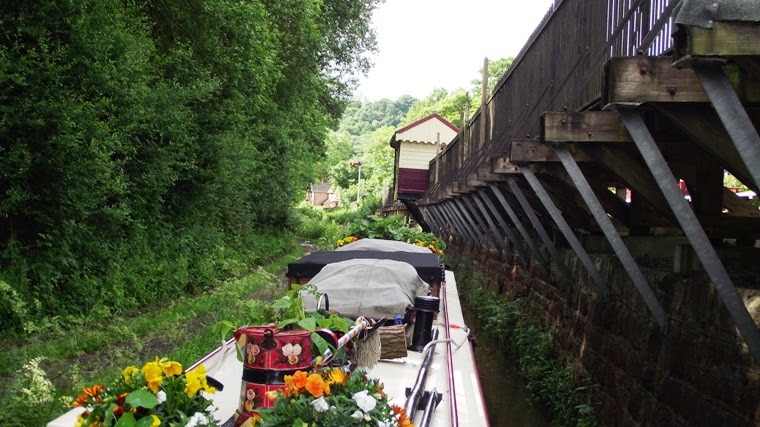 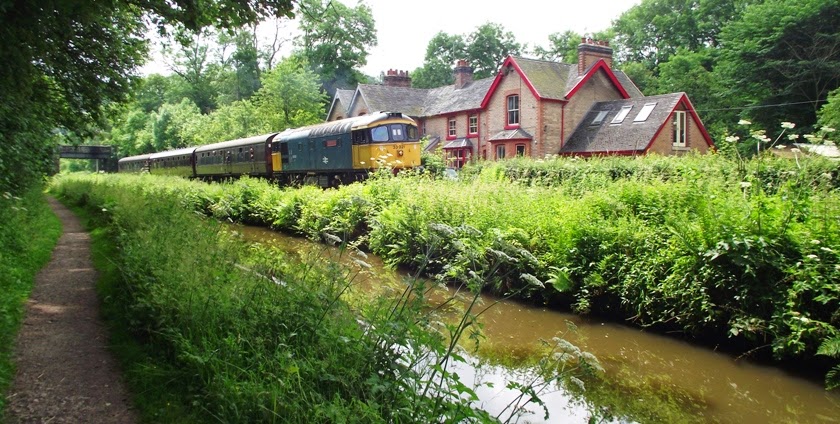 At Flint Mill Lock we left the river section and as we came out of the bottom gates we went through this height gauge. 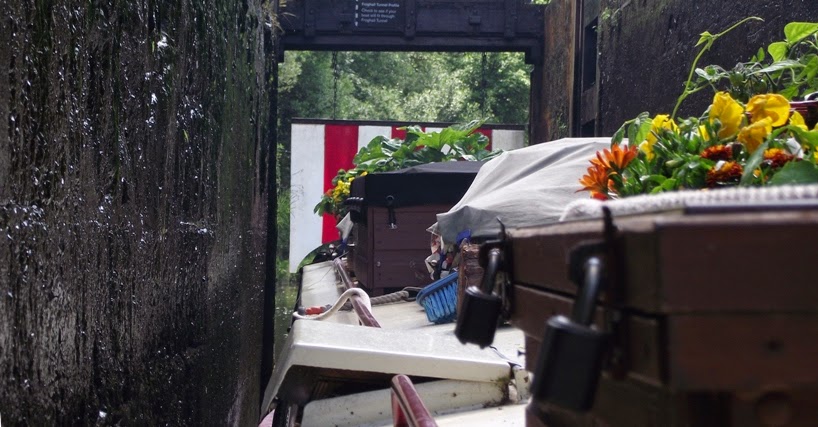 This is for the Froghall Tunnel which is a few hundred yards before the end of the canal. Although there is room to turn a 72’ boat right at the end, If your boat is over 60 foot long and doesn’t fit under here you have to reverse back through the lock and turn round, as there is nowhere wide enough to wind between here and the tunnel. 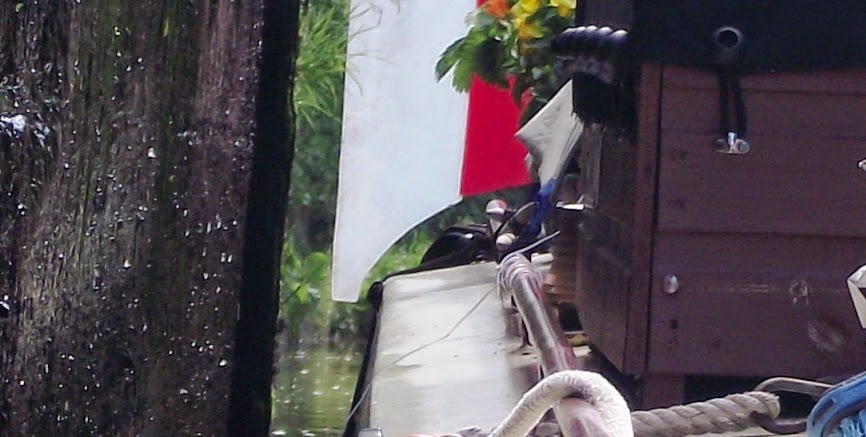 We reckoned we’d be ok.

We stopped overnight on the 24hr moorings before the tunnel, which is where most people tick the “Caldon Canal” box, turn round, and head back to their marina. We had other plans. The next morning we transformed our floating garden 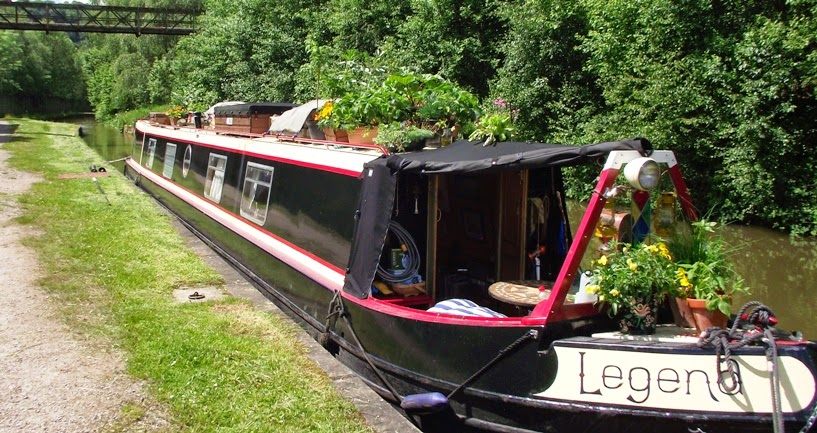 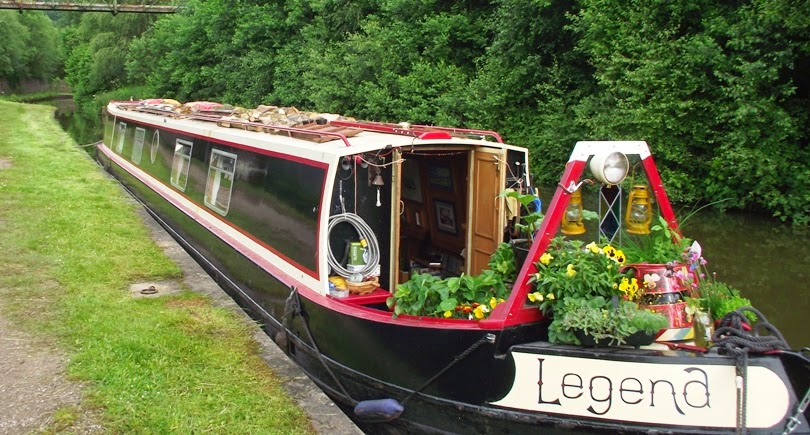 All the stuff that normally lives on the roof had to be found a home inside, so it was a bit cramped. 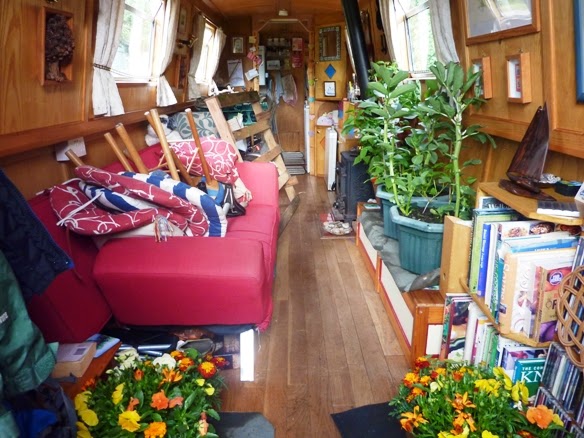 We’d forgotten to fill the water tank at the last tap we’d passed, so we knew that although we could get through a tighter squeeze than most boats due to having sloping sides and inboard hand rails, we weren’t as low as we could have been. We also knew from Brian and Ann Marie that there’s a bit of leeway on the gauge, and we’d had a look through, so we were feeling fairly confident as we went up to the tunnel entrance.  We went in with the engine off and handed the boat through, which is like legging, only we used our hands. That way, if it looked like we were going to get stuck, we’d be going slowly enough to stop and back out without any trouble. Ann-Marie was at the front just behind the headlight, which gave her a close-up view of all the spiders, but she was a very, very brave girl and carried on. It was close, but we got all the way to the other end without a scrape.

You can just see the light at the other end in the photo.
We did the last bit of the Caldon feeling very smug with big grins on our faces. 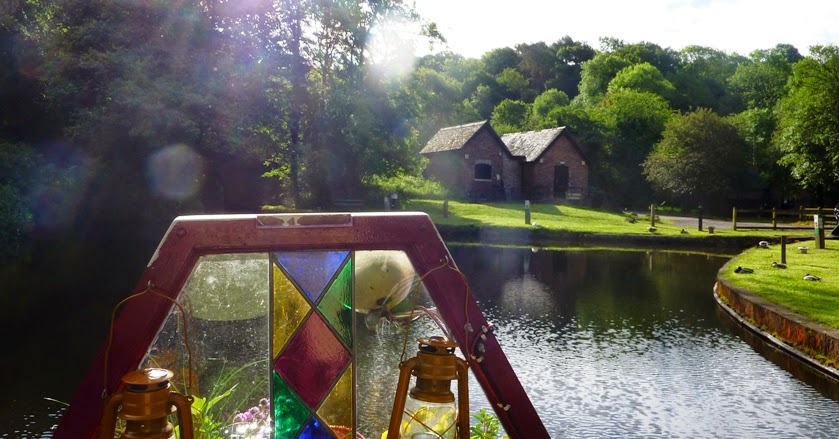 At the end of the Caldon there was right turn into one of the least used locks on the system.

At the bottom of which is this.

This is actually the pound between the first and second locks on the Uttoxeter Branch of the Caldon Canal, however lock 2, together with all subsequent locks and waterway no longer exist. The mileposts all along the Caldon tell you the distance to Uttoxeter; about 14 miles further on, but in 1850 the rest of it disappeared under the tracks that now carry the Churnet Valley Railway. Happily, the first lock and this bit remain as a beautiful but - because of the tunnel - terribly underused visitor mooring basin. There are pontoon moorings, a services block and picnic tables. There’s a 7 day maximum; we stayed for as long as we could, and in that time only 4 other boats came to visit, one of which has a local boat with home-made and well worn wooden guards on the front corners.

Wiltz was having his birthday party at the Trout Inn at Lechlade at the weekend, so we left the boat at Froghall and went down south for the night. It was a long drive, but worth it; the whole Wiltz clan was there, which of course meant lots of George cuddles for Ann-Marie. The following morning Mum and Dad came over to the campsite, with Karen and Lauren. We had a barbeque lunch in the sunshine which included an impromptu fly-by from a couple of Stealth Bombers from nearby RAF Fairford. 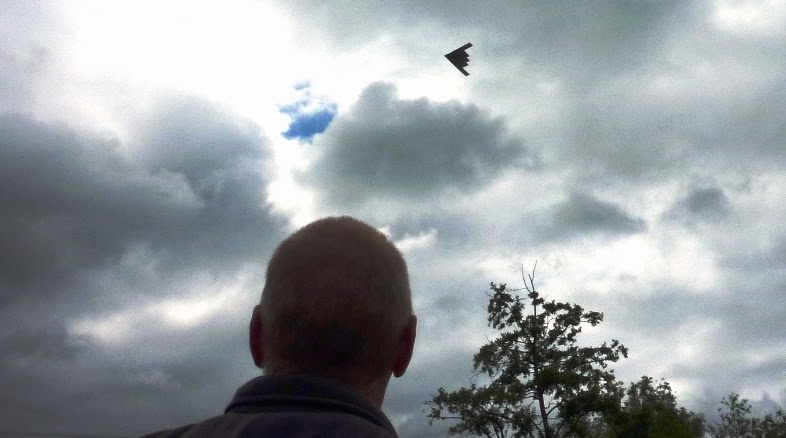 Back at the boat, we had visits from Chloe and Anne, both of who thought we had the poshest mooring they’d ever seen. Rather than putting all the flowers back on the roof we spread them out on the pontoon and had a garden for a week. 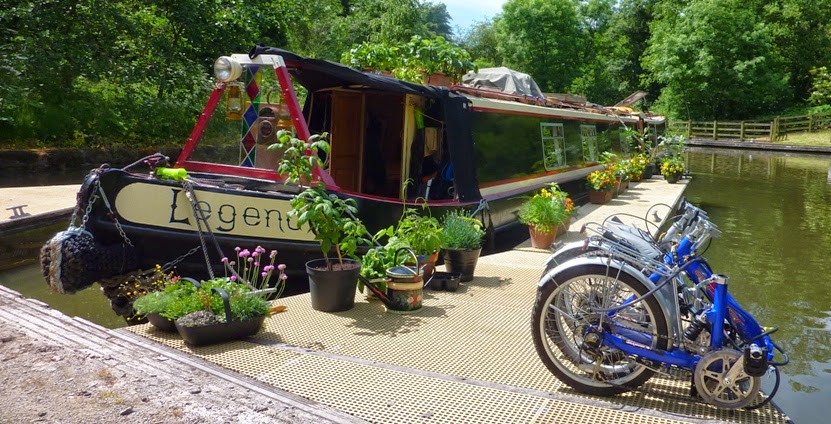 Dave continued with the new window frames and  in-between coats of varnish we managed to fit in a walk to Consall Forge and up the Devil’s Staircase; a flight of 200 odd steps which wind up the hill behind the pub. 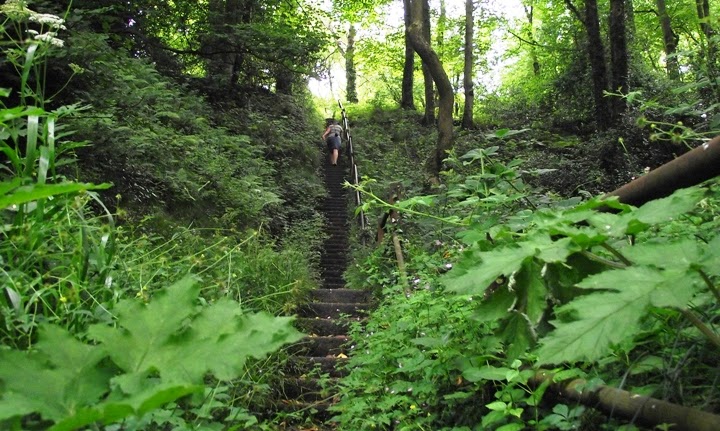 As all the boxes,  planters and pallets  were off the roof and in pieces we took the opportunity to give the whole lot a coat of wood preserver. They all look very smart now.

Thanks to Chloe and a friend of hers we also had a Grand Day Out in Manchester.  We were offered the chance of a night in a 5 star city centre hotel, including use of the pool, sauna and gym, and as much of what Trip Advisor call the Best Breakfast in Town - all for free. We went to China Town and had Sushi for dinner, 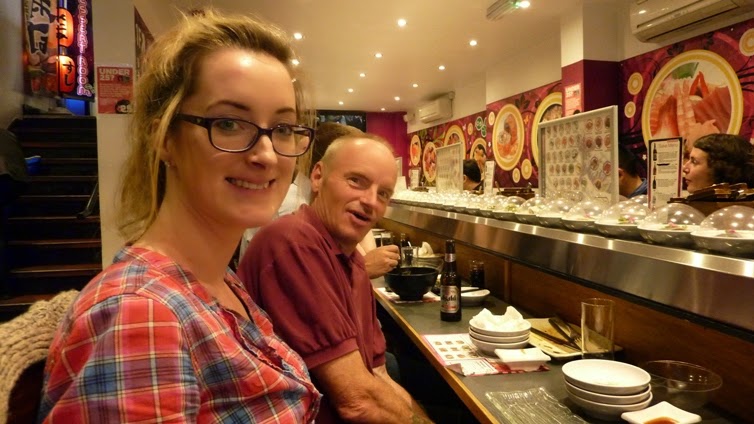 then took a bottle of red back to the room where we drank half of it in the bath and the other half while lying on a bed that was wider than our boat. 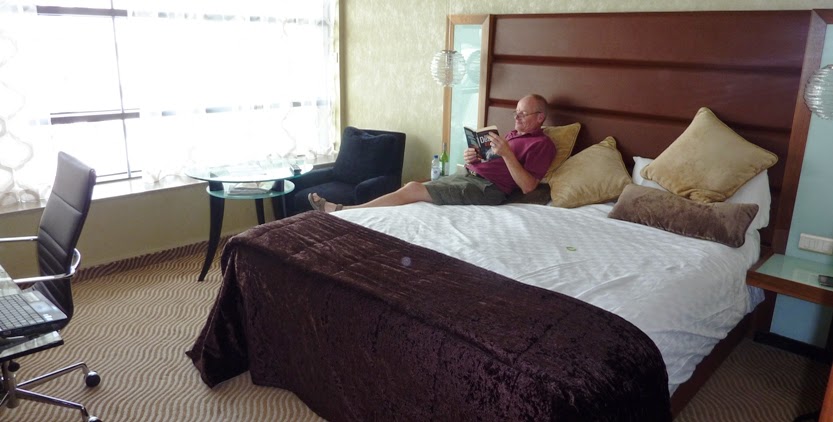 Pure decadence! In the morning we had an hour in the pool and the sauna then a 2 hour breakfast including, amongst other things, fruit, DIY muesli, pastries, cheese, ham and some of the yummiest sausages we’ve ever had. 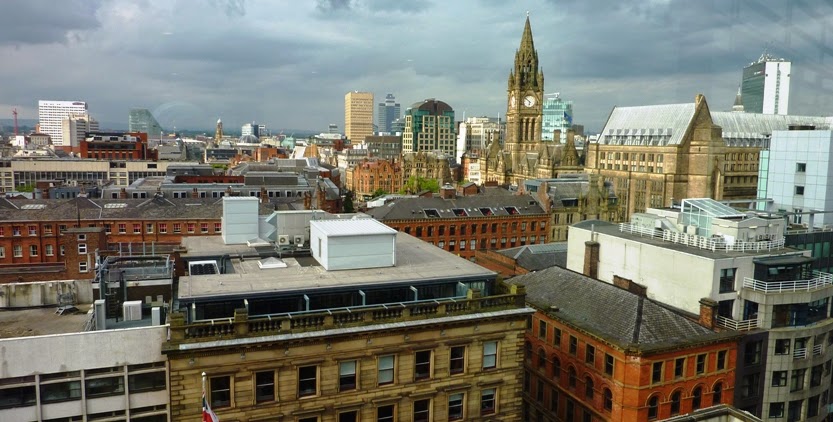 This was the view from our room.
We came home feeling very spoilt and very lucky.
at July 16, 2014