Happy New Year Dear Reader, welcome to 2014; our third year as live-aboard boaters. We hope you had a good Christmas – we did.

For the week before Christmas we were moored in the first few yards of the Bugsworth Arm on the off-side overlooking Tesco. This proved to be a perfect mooring for Paddy, our temporary pet. He did fit in the boat quite easily once we’d put a table, a trolley and a few bags of other stuff in the boot of the car. 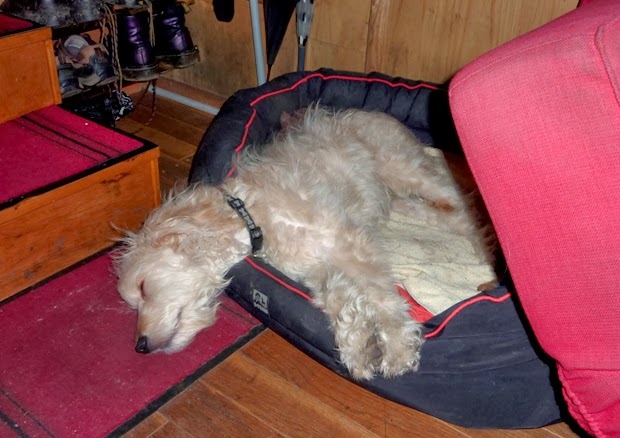 It was also very quiet with no boats going past due to the basin at Bugsworth being de-watered until March. 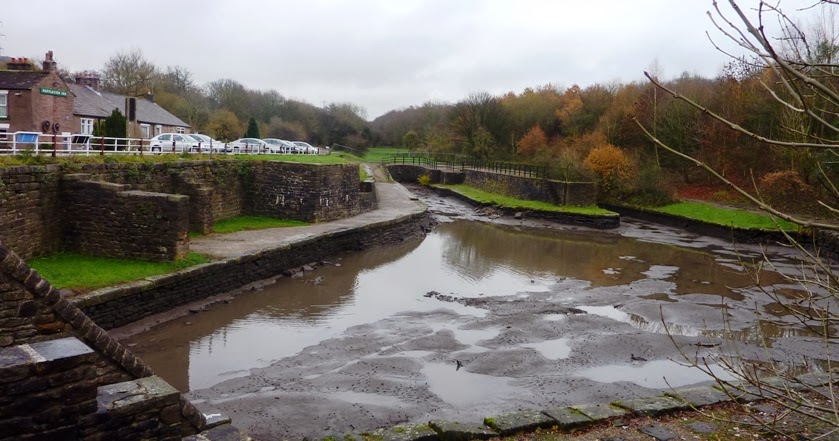 The towpath was still open so we were able to go and see the basin even though we couldn’t take Legend there. We took Paddy for several walks in that direction, including two up the TramwayTrail; a lovely footpath alongside the river, following the line of the horse-drawn limestone carrying tramway running down to the wharves at Bugsworth from the quarries at Doveholes and Chapel-en-le-Frith.
Being in places like this, once the harsh, noisy, dirty hub of the industrial revolution; now tree lined avenues and pools of calm water, always leaves us feeling privileged. The people who built and worked in these places - the men, women and children in the black and white photos on the pub walls - they never got to see the beauty of it all. We are so lucky to have been born in a time when living on a canal-boat is seen as a dream. 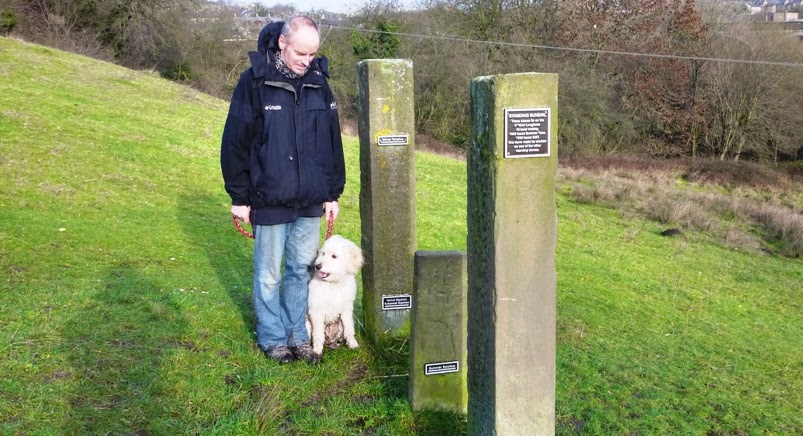 We sat on a bench, had a celebratory drink and toasted the winter sun. When we got back to the boat a chap came up from Tesco and asked us if we wanted a broken fence panel as firewood. Silly question. It turned out to be a roll-cage stuffed full of smashed up 8’ high fencing - they must have backed a truck into it or something – and it took Dave two days to get it all chopped up and usable. 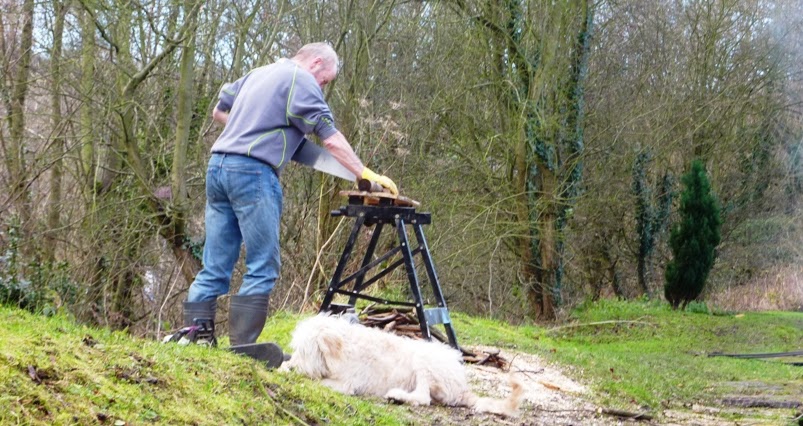 It’s all thin bits of cedar, so it burns fast and hot and you have to keep feeding it, but it was free, and we think it was very nice of them to offer it to us.

The day before Christmas Eve was like changeover day in a B&B. In the morning Shandy came and picked Paddy up, then Kim and Luke came over for a visit and a bit of boat-time in the afternoon. We had a pan of mulled wine on the go, along with chocolate cake and mince pies, so that was nice. After that we moved the boat round the corner and down to the Whaley Bridge visitor moorings. This time we went on the opposite side, in the bit where the Judith Mary moors, which made it much easier for Mum and Dad to get on board when they came to stay.

Christmas Eve was Mum’s birthday. We started off in Marple listening to the Brass Band playing Christmas carols, (and Happy Birthday) then we went to New Mills and showed them the Millennium Walkway. That was followed by a pint in the Navigation at Bugsworth, and in the evening we revisited the Indian in Whaley Bridge. Happy Birthday Mum. 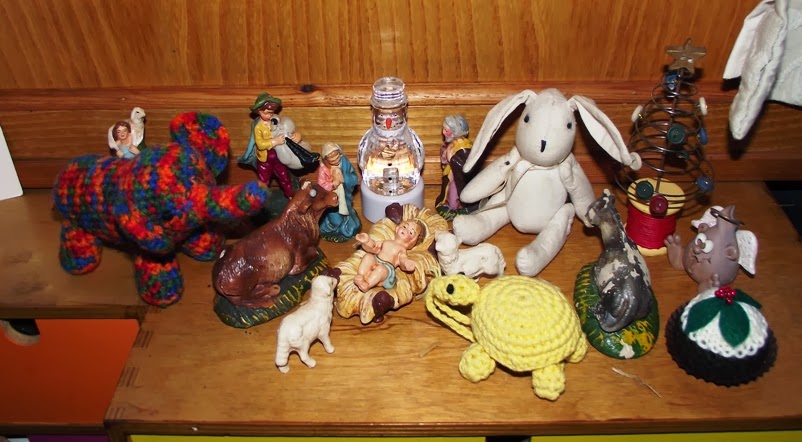 On Christmas Day, after the stockings and breakfast doings, we continued with what is becoming a tradition and did a spot of Christmas Day boating. It was only one lift bridge and about 3 miles to Disley but it was a lovely day and it felt good to be moving. As soon as we'd moored up Ann-Marie produced an amazing seven course Christmas dinner from our little galley. 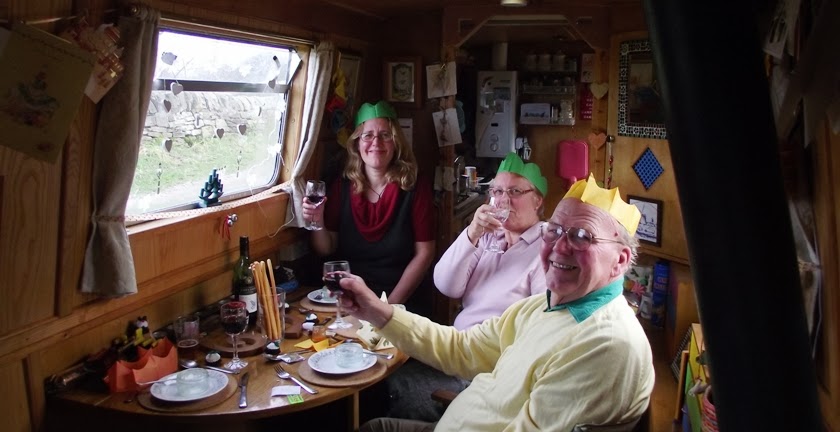 The original idea was to go on to Marple on Boxing Day, but the view over the valley at Disley, combined with a rather grim weather forecast changed our minds and we stayed put for the rest of the week. Sue, Ann-Marie’s cousin and her husband Steve came over for a visit. We met up in a garden centre near Marple and then they came back to the boat for lunch. 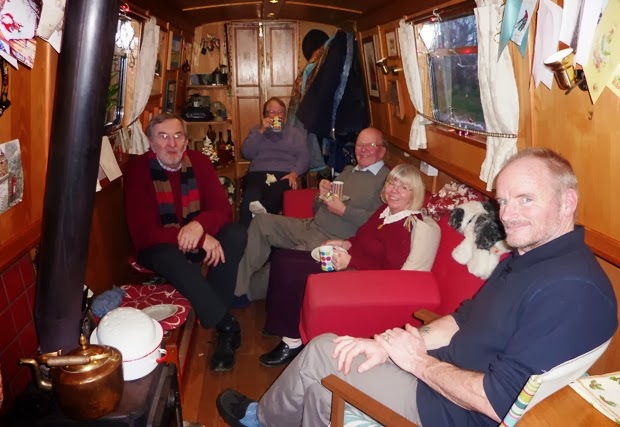 The last time they were on the boat we were up on the Lancaster canal and they lived in Millom on the south Cumbria coast. They now live in Hesketh Bank, near Tarleton, so we’re going to have to pay them a visit before we go too far south.

After 5 very enjoyable days Mum and Dad returned to their home in Fleet and we went over to Anne’s for a “Festive Frazer Frolic”. All her kids plus partners and friends were there and we had a fab evening playing silly games and eating far too much. In the morning, along with Anne’s entire clan, we went for a walk along a very windy Curber edge. 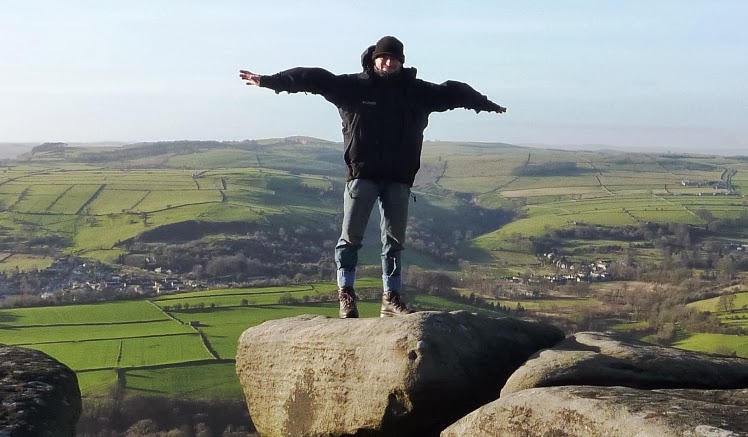 It was good to see them all together and happy.

We finally moved up to Marple on New Year’s Eve. We did a wash-out then moored up opposite the Ring o’ Bells. It was a bit shady, but easy to find in the dark. This was important as we were going to Buxton for New Year and while we were out, Chloe and Shandy were coming to stay for a couple of nights on their way home from Ireland. On New Year’s Day we had the luxury of coming home to a warm boat and in the afternoon we all went for a walk with Paddy to Brabyns Park by the side of Marple locks. The grass was very wet and he got incredibly muddy which, although we didn’t know it at the time, was just a taste of things to come.

The next day we boated to Higher Poynton to a lovely mooring on the side of a flash. A flash is a wide part of the canal where the ground has subsided due, in most cases, to mining. It was a bit open when the wind got up, which it did most of the time we were there, but it was nice to hear the water lapping at the side of the boat; it reminded us of Glasson Dock, one of our favourite moorings. Chloe and Shandy went back to Daventry in the afternoon leaving us in charge of Paddy for 10 days while they went skiing.

We were in the perfect place for puppy sitting; there was a big playing field right next to the mooring where he could run about like a loon and a hundred yards away there was the Middlewood Way, a disused railway line running parallel to the canal for 5 miles in each direction, so we could make endless circular walks. Also there were numerous footpaths between us and Lyme Park. The only little snagette was the mud which Paddy seemed to attract like a squeegee mop. We had a permanently filthy towel hanging in the bathroom. 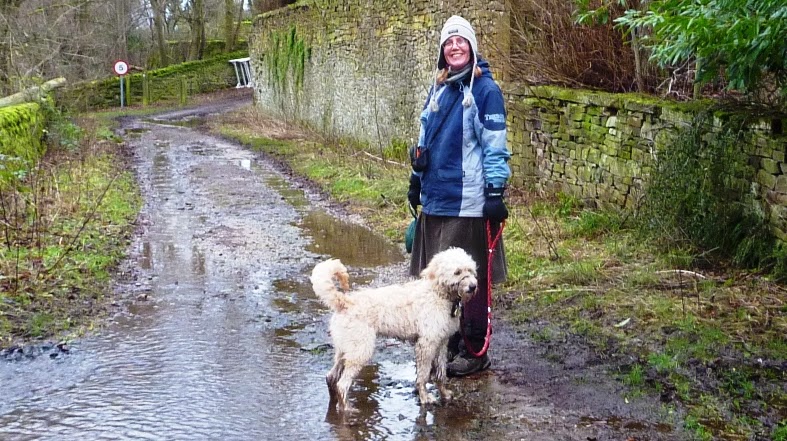 This was the week when the south of the country was being flooded and torn apart by the wind, so a bit of mud in our boat wasn’t so much of a hardship really, it just felt like it.

On the first Tuesday of 2014 we had our 4 yearly Boat Safety Survey. A very nice man called Martyn turned up and, while being molested by an excited puppy, went through our home with a fine tooth comb.  A BSS has been likened to an MOT for a car, but it’s not a very good simile. It doesn’t matter if your engine doesn’t work or if your boat is actually sea worthy or even afloat; the main concerns are that it’s not going to blow up, catch fire or asphyxiate you. If it comes under the heading of Fuel, Ventilation or Batteries it’s going to get checked and tested, as are all your fire extinguishers, your fire blanket and your escape routes. This might sound a bit over the top until you realise that all flammable gasses are heavier than air and that a boat is nothing more than a bucket with some pretty pictures on the side.


Happily we passed, and as long as we don’t do anything silly in the next 4 years there’s no reason to worry about the next one. One thing that Martyn did bring up that we weren’t aware of, was that on the previous BSS Legend was registered as a 2 berth boat. Which is fine, as most of the time there’s just us and we only have one fixed bed. However we do have a bed-settee and we quite often have people to stay. Even though there is nothing physical we have to change to make it a 4 berth, if our boat has only been declared “safe” as a 2 berth we shouldn’t really have any more than that sleeping on it. So if you’ve been to stay, thank you for not prosecuting us, and if you come to stay in the future you can rest securely in the knowledge that there are now officially 4 berths.
at January 08, 2014