Last week, for the first time ever, we locked Legend up and went away for ten days. We emptied the fridge, shut the gas, electricity and water off, took all the loose stuff off the roof and stowed it in the engine room, packed our suitcases and drove away. The longest we’ve left it unattended before was for a long weekend and after our recent incident we were a tad trepidatious. We chose our mooring site very carefully; we needed somewhere non-rural but close enough to civilisation to be walked past regularly, somewhere not visible from a main road but accessible with a convenient parking place. Whin’s Bridge ticked all our boxes and happily proved to be perfectly safe. While we were away we kept finding ourselves watching dramatic-looking weather forecasts predicting Alaskan storms engulfing the UK, and returned after nine days expecting to have to dig our boat out of a snow drift, but apart from a little heap on the towpath, which had been sheltered by the boat there was very little to show for it.

Actually that’s not strictly true; all the Pennine passes were closed on the way home, there are still snow sculptures overhanging hedges and ditches everywhere and there is an enormous drift on the road near where we parked that we had to drive round with all four wheels on the pavement. So yes, the weather forecast was right and there was a bit of disruption after all.

We’d left the bird table up while we were away and came back to find it continuously visited by no end of hungry birds who, like us had been caught out by the cold snap. Hopefully it won’t last for long; there must be lots of newly hatched youngsters struggling for life at the moment.

Oddly the canal itself wasn’t frozen until Thursday morning, and even then it was only patchy. By then we’d moved up few miles to a little hamlet called Withnell Fold which has cobbled streets and a set of stocks.

After 48hrs on the moorings there we set off again to the Boatyard Inn at Riley Green where Frankie and Harry came on board for an Easter cruise through Blackburn.

There isn’t much in the way of pretty in Blackburn, 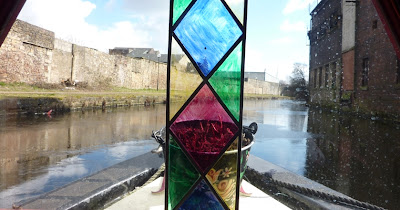 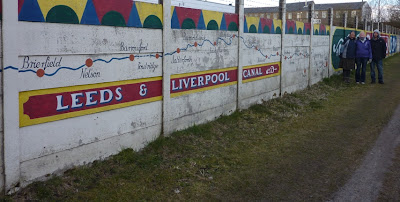 the six locks are interesting, there are the remains of some lime-kilns along with the basin which served them 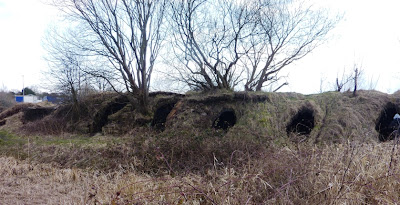 and Eanam Wharf, where we moored up for the night, is very impressive. 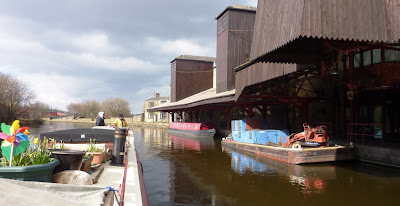 Due to there being too much water coming down the locks, and due to there being two wide-beam working boats moored in the smallest pound in the flight, we managed to flood the pavement outside the lock-keepers office. Technically it was the lock-keeper’s fault as he was setting the next lock and sent all the water down, but it was us everyone was pointing at.

On Easter Saturday we went Church, 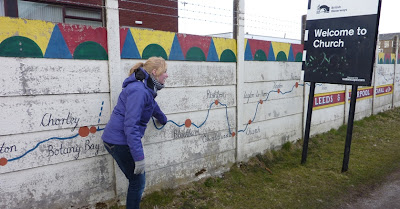 which is a suburb of Accrington, next to Oswaldtwistle, where we shared a mooring with about forty Canada geese. 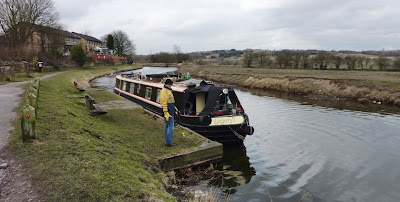 It is the half-way point from Liverpool to Leeds and there’s a thingy to mark the spot;

63 5/8 miles from both ends. F&H went off on Sunday and on Monday we cast off and carried on into the teeth of a gale, to the middle of nowhere overlooking the moors. “Mooring” in more ways than one.

We’ll be here for a few days on our own. Dave is going to finish the engine room and Ann-Marie is going to get the last curtain tie-back done and get stuck into some spring cleaning. As soon as the outside temperature improves, we’ll be giving the tumblehomes their annual lick of paint and putting a coat of blacking from there down to the water-line.