Ok, who spotted the deliberate mistake? Well done John, you are correct; the Lancaster canal is 41¼ miles long (44 if you include the Glasson Branch, which we will), not 24 as reported in the last post. God knows where we got that number from, but it means there’s almost twice as much of it as we thought! As expected we’re now back to our “Not very far, not very often” method of travel so at the moment Legend is moored at Catforth, 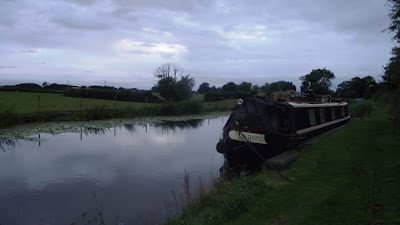 still on page one.


Although we don’t have a television we managed to watch the Olympics opening ceremony. The Vue cinema chain was showing the whole BBC broadcast for free so we spent six hours in a pair of comfy leather VIP seats in Preston. We normally watch films on a 10” portable DVD player. Having to turn your head to see the edge of the screen while the whole building vibrates with the sound was a bit of a culture shock and we spent most of the drive home saying “Pardon?” It was good though. Watching the Industrial Revolution take place in a sports stadium is something you don’t forget in a hurry and Chariots of Fire will never be the same again.

Normally, life on a boat means you rarely get more than 10 feet away from each other. You look forward to going visiting because it will give you the chance to sit at a table without your knees touching. Above all the other constraints of off-grid boat life, above power generation, water storage, waste management, keeping warm and the hundred or so other things you have to be constantly aware of, living – literally - in each other’s pockets, was one of the hardest things to get used to. Personal space, we’ve found, is about the most precious thing we own. How much we’ve adapted to our sardine tin existence is now being put to the test. Ann-Marie’s mum went in for a hip operation and we decided that the best thing would be for Ann-Marie to go down on the train and stay for a week, putting us at opposite ends of the country.

Dave has taken the opportunity to separate our little Morso Squirrel stove from its flue in order to replace the collar and reducing ring, both of which have been broken and held together with fire cement since we bought the boat. Unsurprisingly, dismantling it was a messy job, and involved removing a whole bucket-full of soot and ash, so it’s just as well that Ann-Marie wasn’t there to see it. With the feet removed from the stove, there should be just enough give in the water pipes to get the new collar in. 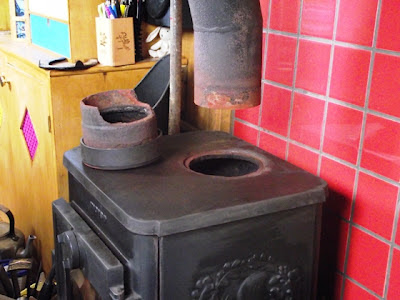 Getting hold of a new 5 ¼” collar was a piece of cake, it’s a Morso spare part, but a new reducing ring wasn’t so easy. Morso not only don’t make one, but specifically don’t recommend reducing the flue diameter. It is, however, common practice in narrowboats and our flue, like most older boat’s, is 4½” The reason you can get away with it, and in fact need it, is because the height of the flue is so short; the reduced diameter makes the gasses go up quicker resulting in a more dependable and stronger draw. Apparently. It might just be because a big fat chimney would take up too much room. Whatever, that’s what we’ve got. It used to be the case that any chandlery that dealt in stove parts kept them in stock, but new boats have to comply with a European Directive which stipulates double skinned flues, which are fatter and don’t need a reducing ring. Thankfully, after a lengthy web search we eventually came across one, which is now on its way to Ann-Marie in Hampshire. So now, on her way back, as well as the rucksack full of girl-luggage, she’s now got a big lump of steel to haul across London.

Dave’s also re-wired the lights in the saloon so that there is a switch at both ends, 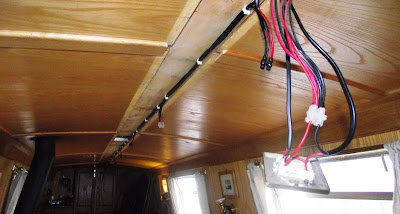 which means that we don’t have to go through half the boat in the dark before we switch a light on, and we can now switch on either 4 lights in the settee end, or 3 lights in the table end, or 2 wall lights. It doesn’t sound particularly exciting but it makes a big difference.

When Ann-Marie gets back to the boat, we’ve got a week with nothing on the calendar. Hopefully we’ll get out for a walk or two; there are no shortage of footpaths up here and the little bit of the canal we’ve seen so far has been just a lovely as everyone said it was. Next Wednesday our 14 days will be up here so we’ll move the boat on through Bilsborrow towards Garstang. We need to find a nice secure looking mooring because we’re going to Edinburgh. Dave’s cousin Libby from Australia is performing at the Fringe and her parents, David & Liz, are coming over from Sydney to see her and go on a whirlwind UK tour. David hasn’t been here since 1958 when he boarded a ship to the New World as a £10 Pom, and Liz has never been so it’s all very exciting.

Our plan for cheap motoring got a boost last week when, with the addition of 3 wiper blades and a light bulb, the car passed its MOT. And we got a half-price internet deal from Halfords so it only cost £27. Result!
at August 01, 2012

Can I still leave a comment if my name's not Dave and/or Ann-Marie? Washing-up is over-rated.

hey
could you point me where you got your reducing ring from???