Is this the end? Has God had a word with Noah? We don’t care, we live on a boat.


Whatever, it’s turning into a miserable summer. We’re trying to look on the bright side though; a task made a lot easier when your chosen life-style makes “water, water everywhere” an advantageous state of affairs. The good news is that, apart from the rumour that one reservoir somewhere has only been allowed to be ¼ full, because of a badger’s set in the bank, there seems to be no hint of navigation restrictions due to drought this year. (Said badgers will, no doubt, be culled at some stage to prevent tuberculosis in cattle.)

British Waterways’ jurisdiction extends up the river Weaver to a bridge at Winsford, beyond that you are on your own. The Nicholson guide vaguely says it can be shallow in parts. Helpful - not. Undaunted we went under the bridge, taking Legend out of BW waters for the first time. Straight away there was a twisty narrow bit with trees overhanging both sides that reminded us of Yellow River. We crept through on tick-over, expecting to see a crocodile or hit the bottom at any minute. 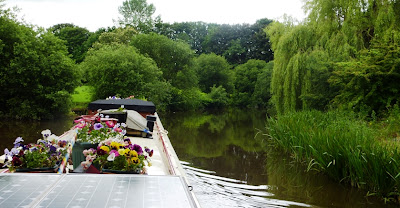 After a couple of hundred yards of not hitting the bottom the trees opened out and we found ourselves in Winsford Bottom Flash, which we thought was a chargeable offence, but turned out to be a big lake. 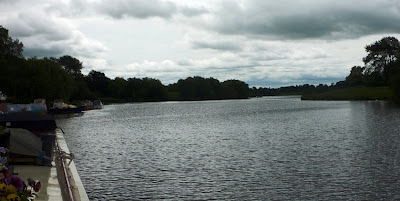 There was a caravan site and several moored boats on the left shore and enough space for a 57’ boat go round in circles. So we did. Because we could.

On the way back to Anderton we moored up at Vale Royal, just before the lock; another beautiful part of the world, and went for a walk over the lock to where, according to our OS Explorer, we should find the ruins of Vale Royal Abbey. We found a golf course and a posh new housing estate, but it was a nice walk; the footpath took us round it all and back along the river to the lock.

In the morning we were passed by NB Kandahar, so we quickly got going and followed them to the lock. When we got there the keeper was just opening the gates so we both went in and tied up together. Kandahar went out first and we followed them downstream. It was lucky for them that we did; half a mile further on they developed an engine problem and we were able to pull up alongside, tie the boats together and give them a tug to the next lock. 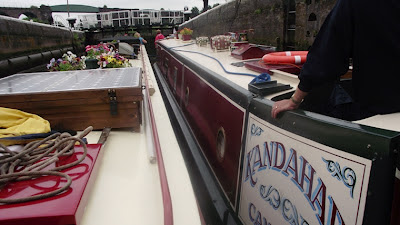 It’s all excitement on a river!

We got back to the lift on Thursday lunchtime; there were no spaces going up in the afternoon, so we had a night on the short term moorings. What with the chemical works on the opposite bank and a sound check going on for the Lift Off 2012 Festival behind us, we thought we wouldn’t get much kip, but with the curtains shut and Legend’s gentle rocking we had nothing to worry about. 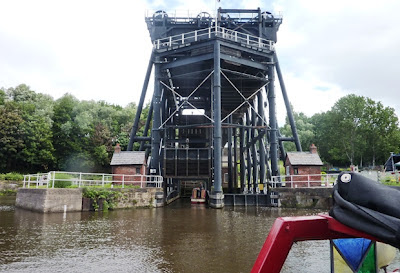 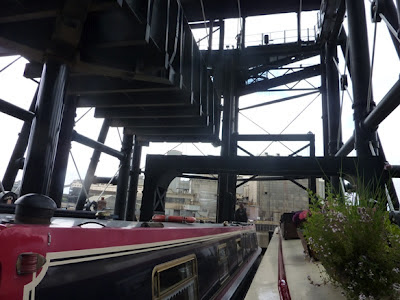 and back on the T&M. That was when we discovered that the boat lift has a little trick to play on you as a sort of goodbye present; the last guillotine gate is covered in fresh-water mussels 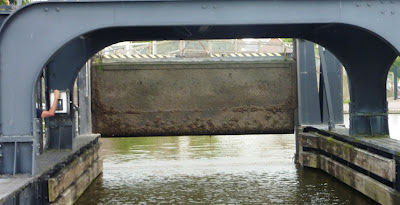 and as you pass under it they all squirt muddy goop on your boat roof. 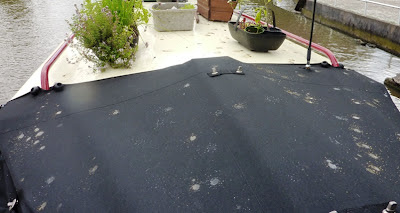 Oh how we laughed. We turned left onto the canal, which, because the entrance is at an angle, means turning right then turning round, and in our case resulted in three boats doing an elaborate ballet in the middle of the canal. We moored up just before Branton tunnel, washed all the mussel poo of the roof, and then left the boat for the weekend while we went to Chesterfield. The Chesterfield Canal Festival was on at the newly opened Stavley Basin; a dynamic restoration project with enough inertia to have a real chance of being completed in our time on board. As well as supporting a very good cause, it was an ideal opportunity to have a look at a canal that we will probably cruise along at some time, while it is still under construction. 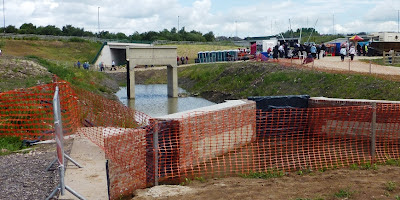 The rain held off and there was a good turn-out for the festival on the Saturday. We were impressed by how much there was there; as well as the usual stalls full of painted buckets or rag rugs or very earnest people from other canal restoration projects, there was a fairground, painting & craft for kids, canoeing in the basin, and boat trips on the new section of canal.

For us it was a good social gathering as well; Anne, along with Mark and his children Jordan & Chloe were there as well as Chloe, Shandy, Frankie & Harry, who were up in Derbyshire for Jon & Jo’s party.
Afterwards we all went back to Anne’s for tea, a big crowd round her big dining room table. Fab.

Back on board Legend we set off up the last bit of the T&M towards Preston Brook. This includes three tunnels in quick succession; Barnton, Saltisford, and Preston Brook, all of which present a challenge. Barnton is straight, but you have to make a sharp left to get in it, while the other two are so kinked you can’t see through them.

At the end of Preston Brook tunnel the T&M ends and the Bridgewater Canal begins. This was the one that started it all. Originally built to drain the mines at Worsely, then extended to ship the coal out to Manchester, it is now owned by the Manchester Ship Canal Company and is very different to BW canals. The first thing you notice is that it’s wider and deeper; you can chug along quite happily and not make a wash. There are stop plank cranes, off-side mooring sites, stone edges and a distinct lack of Armco. It’s very nice.

A BW licence allows you seven consecutive days on the Bridgewater. How anyone enforces that we’re not sure; we didn’t clock in at the beginning, but we’ll be off onto the Leeds and Liverpool before our time is up anyway. So far we’ve moored at Preston Brook, Thelwall, Sale and had two nights right in the middle of Manchester City Centre at Castlefield. From Thelwall we had a walk over to the nearby Manchester Ship Canal, which is a bit bigger.

You can take pleasure craft on here, in fact in these days of containerised shipping there is no freight movement on it anymore, but it would be a daunting prospect to be on a little narrowboat in a lock this size. 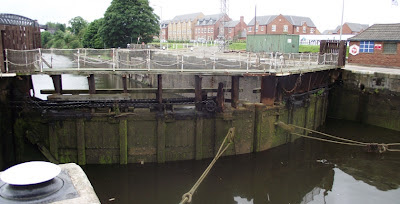 The Bridgewater goes west from its junction with the Leigh Branch near Trafford Park and heads past the Kellogs factory and Old Trafford football ground into the city. While all around you the concrete jungle grows denser, the canal remains detached from it all in its green corridor until the last minute. 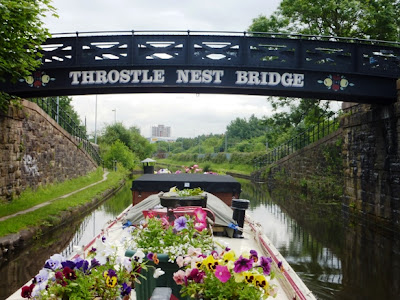 Then there is a rash of fabulous bridges 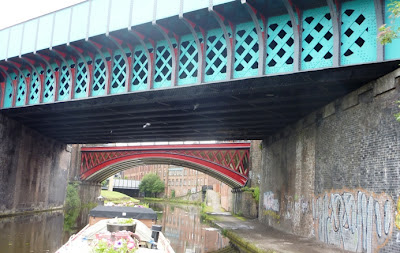 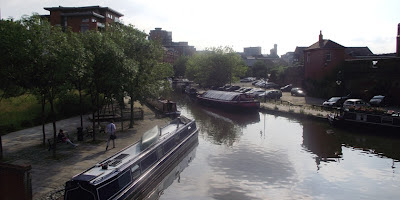 By pure co-incidence we moored up next to Kandahar; the boat we’d given a tow to on the Weaver. We’ve never been to Manchester before, so we were grateful that for one of the two days we were there it didn’t rain and we managed to get a look at it. Our good friend Ian came to see us the first day we were there, and in the evening treated us to a meal in the nearby Wharf restaurant. We had a great time and hopefully he’ll be able to join us for the River Ribble crossing.

Where the Bridgwater Canal ends the Rochdale begins, climbing up through the first nine locks almost under the city centre. Then there is a junction; the Rochdale continues to the left on its way over the Pennines while the Ashton Canal turns off to the right to join the Peak Forest and Huddersfield Canals. We’re not going that way this time; we’re going back out to the Leigh Branch then on to Plank Lane and the western end of the Leeds & Liverpool.

Here’s a glimpse of what we got to see of Manchester in the short time we were there. 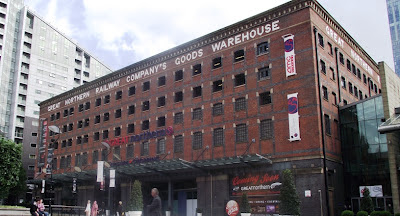 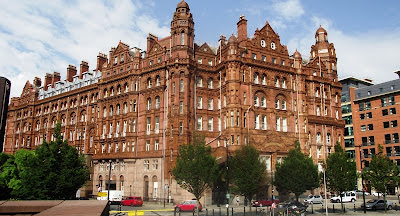 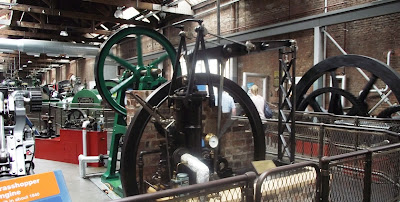 Unfortunately the second day was the Friday when the whole country got flooded, so we didn’t get to see much more, but this certainly won't be our last visit.
at July 06, 2012

Wow that was a mega-post. And as entertaining as usual. Thankyou.