Llangollen Canal. Ellesmere to Trevor & Back

Once again we've had both barrels from Miss Serendipity's happy-gun. Being here and now was something we’d organised in a loose kind of way at the beginning of the year. It was Mandy’s birthday at the end of May, she said that she & Chas would love to visit and we said that we could probably be up on the Llangollen canal by then and a trip over the Poncysyllte aqueduct might be a fun thing to do. We hadn’t gone into dry dock by then but we thought it would all work out ok. Well it did. In spades.

We picked the guys up on the town arm in Ellesmere in the afternoon. In honour of their visit and to help celebrate Mandy’s birthday we’d put up the bunting and the Happy Birthday banners and Legend looked suitably festive. 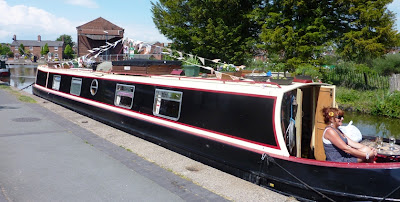 We turned right out of the arm heading west, past Frankton Junction where the partly restored Montgomery canal goes off to the south and moored up for the night at Brooms Bridge.

In the evening we went for a walk and just happened to come across the Myton Inn at Hindford. Oh dear. More beer.
The next morning we set off up the two Marton locks which get the “prettiest lock cottage garden” award. 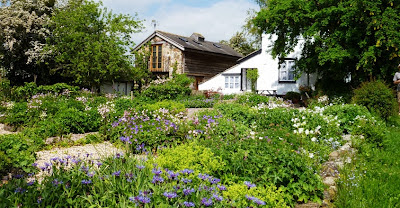 Ann-Marie went back to wind paddles for a chap who was single-handing a gorgeous wooden tug called Green Man. 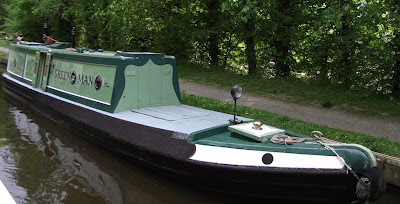 Because tugs are deeper draughted than usual and the top Marton lock is quite shallow he couldn’t clear the ledge so she had to flush him in, i.e. open a top paddle with the bottom gate open to create a wave that lifts the boat enough to get it into the lock. We’re talking about stuff straight from the “Advanced Boating” end of the manual here. She got the promise of a drink later and was buzzing about it all afternoon.

After Marton the scenery starts to get closer and more dramatic as canal, road and railway are squished into the steep-sided Dee valley.

Chloe & Shandy were on their way home from N.I. via Holyhead in Dennis, their VW camper, so we’d arranged to meet them at a pub near Chirk. We moored up outside just as they were parking and after introductions all-round the six of us had a lovely lunch in the sun. 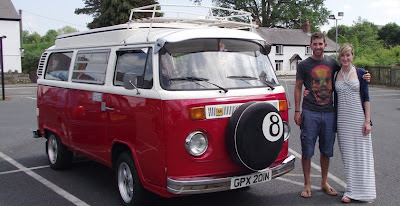 Later, once the kids had driven Dennis off towards Daventry we fired up the Lister, cast off and rounded the next bend, taking us out of England and across the big stone Chirk aqueduct into sunny Wales. This is an undeniably impressive structure, which, if it was anywhere else in the country, would be the on all the local postcards. 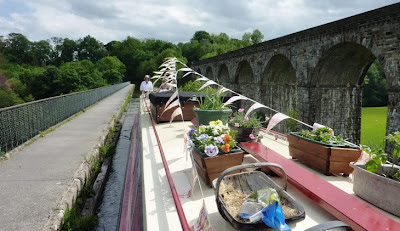 The reason it isn’t, and why you sort of feel sorry for it, is because firstly it lives in the shadow of its next door neighbour, the railway viaduct, which rises above it, and secondly its big brother a couple of miles away is higher, longer and far more famous. It ends with a “Welcome to Wales” sign in a big basin half-way up the hillside where the canal dives straight into the Chirk tunnel. 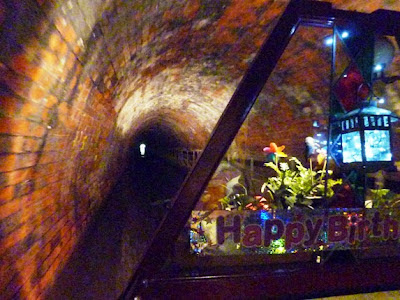 It sounds scary but it all happens very gently. Despite it being quite busy on the cut both the bridge and tunnel were clear for us. After that comes the shorter Whitehouses tunnel then a stretch towards the old limekilns at Froncysyllte with the canal clinging to the side of the valley. From here you get tantalizing glimpses of the graceful arches of the next big thrill. 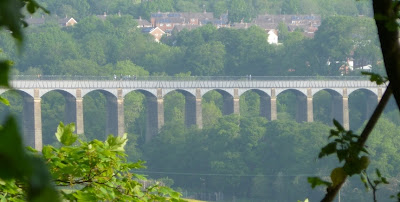 We got lucky with the Fron lift bridge; another crew opened it for us, and then we were round the bend, out of the woods and without having to wait or queue or anything Legend was suddenly over a hundred feet up in the air on the magnificent Pontcysyllte aqueduct. The view is amazing, and made all the more spectacular by the almost non-existent edge to the cast iron bath-tub that is stopping your seventeen tonne boat from plummeting ……

it’s best not to dwell on it too much.

In the little town of Trevor at the end of the aqueduct, there is a sharp left turn to Llangollen, while straight ahead there is a short arm leading to a wharf, a hire centre and some permanent moorings. 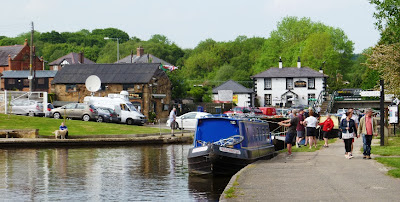 This was the beginning of the planned route north from Ellesmere to a proposed ship dock on the Mersey; Ellesmere Port. It never got finished, the Chester canal – now the northern end of the Shropshire Union – extended to the new dock instead. The feeder from the River Dee at Llangollen which supplies the huge Hurleston reservoir was made navigable and the Trevor Arm became a boatyard and a very pretty mooring spot. Ironically, the most popular canal in the UK was never meant to be. It wouldn’t have made any commercial sense in the days of working boats, but then neither would fourteen day moorings or cruising rings. When you think about it, although we hold up a veil of authentic boats with proper engines and pretty painted roses, it is nothing at all like the working days.

Without any hint of smugness we did a perfect turn at the end of the arm and were back just in time to follow the last boat back over aqueduct. We couldn’t have timed it better, and a free ride through the lift bridge – again – put the tin lid on it. We moored on the 48hr rings near the limekilns, got the Barbie out and the four of us, along with Philippa who came back for another visit, had a superbly chilled out evening. 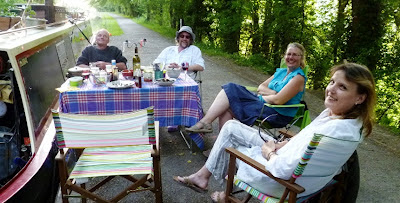 The following morning, as if we'd put days and weeks of meticulous planning into it - which we hadn't - the Olympic torch arrived in Trevor, and the handover took place in the middle of the Poncysyllte on Saturn, the only remaining horse drawn flyboat in the country. It turns out that our friend from Green Man is part of the Saturn Project and was in the bow-hauling team. 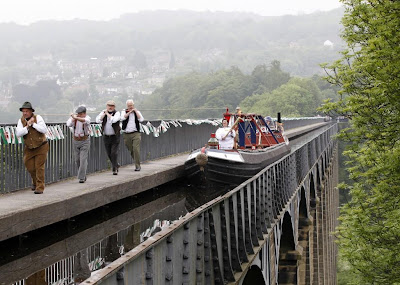 We were there along with the TV cameras, the Fron male voice choir and loads of school kids who’d all made cardboard torches. It was all very moving and we were thrilled to be part of it all. 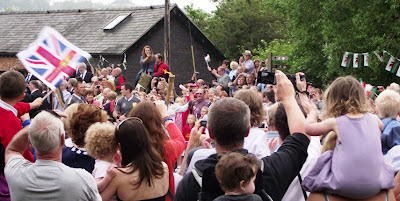 As we took Legend back towards Ellesmere we couldn’t believe just how fortunate we’d been. Our little trip into Wales had gone so smoothly and by pure chance had put us right in the middle of the action. And we’d been just in the right place to see Chloe & Shandy on their way home. Although to be fair, they’d have gone to wherever we were; we had their spare door key and they’d left theirs behind. “Honest Dad, we’d have come to see you both anyway!” Yeah. Right.

We retraced our steps to Blake Mere and found an even nicer spot to tie up at. 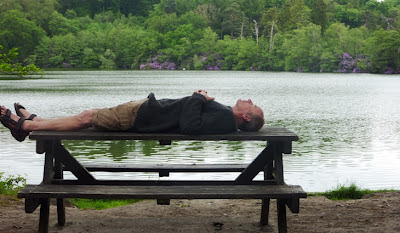 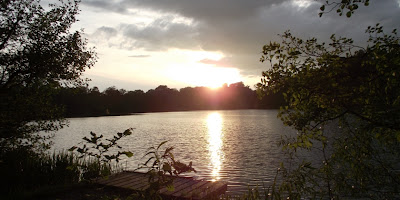 It sounds cheesy – no doubt it is cheesy, we don’t get out much – but we really do wake up every morning and say thank you for our wonderful life. 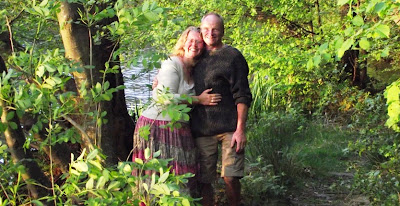 I won't hate you or stop reading your blog, but I can't guarantee not being a darker shade of green next time we meet.