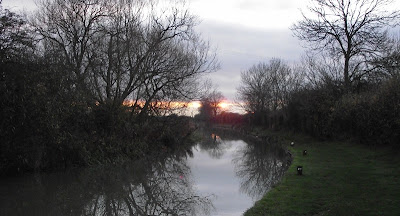 Where’s everybody gone? It’s as if someone turned a switch on November 1st and made all the boats disappear. We do know where they are really. They’re either tucked up in marinas, or they’re on winter moorings…… or they’re on a canal that isn’t a temporary dead end. Read on…

After moving the car to Marston Doles Bridge, walking back and filling our water tank, we left Fenny Compton around 2pm with Luke as crew. This, as it turned out, was about an hour too late. The James Brindley designed Oxford is a contour hugging, meandering waterway; there are several horseshoe bends and one place where, as you go round a bend to your right, the bridge you are going to go under in half an hour is across a field to your left! 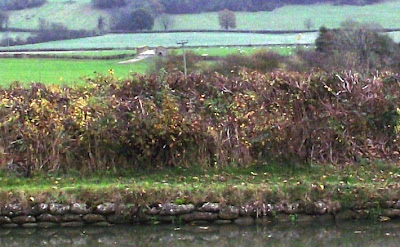 It’s all great fun, but the twists and turns make a nonsense of our 4mph top speed. On most of it we were lucky to be doing half that and ended up way after sunset on the final mile and a half with the headlight on. We knew we would be ok though; the Napton flight - which starts at Marston Doles bridge - was closed for maintenance, making the bit of canal we’re on at the moment effectively a cul-de-sac and there were no other boats between us and the end. We got moored at about 5.30 in pitch darkness, took Luke back to The Wharf Inn, where his bike was, then stayed for a meal and for the arrival of Chloe and Shandy in their newly acquired VW camper! 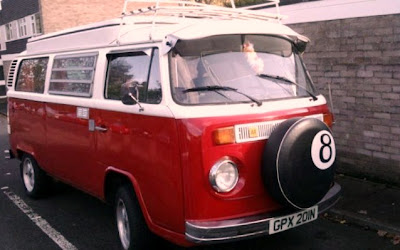 The following day in our hectic social calendar we drove up to Anne’s in Chesterfield and went to a very packed and very enthusiastic barn dance at her local community centre. With the excellent Brampton Community Band and free chips. Oh Yes, it’s all exciting stuff!

The central heating is back together and working better than it has ever done. Why it was put together like that God alone knows. Other good boat stuff: Dave’s got a new toy. 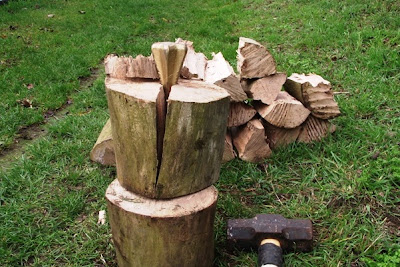 It’s called a Log Grenade. That’s some well-seasoned oak that we picked up a while ago and nothing else would touch it. We went up to Whaley Bridge and got a new pair of fenders from Brian and Ann Marie who own and work NB Alton, trading as The Peak Forest Canal Carrying Company / Renaissance. We first met these guys through the 2CV club and they’ve been a very big step on our road to being boaters, they gave us loads of advice and even had us to stay for a couple of days on their coal run along the Trent and Mersey. We lock-wheeled Heartbreak Hill and sat on the coal through Harecastle Tunnel. Good times. 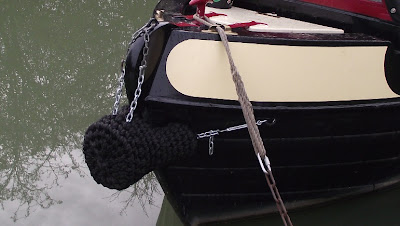 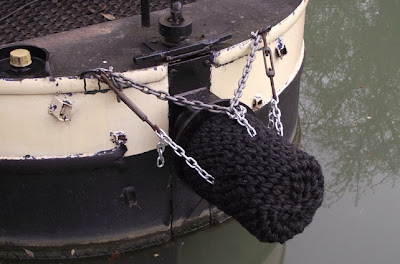 Thanks B&AM, they look fantastic! Our old hessian back fender was so rotten that it fell apart when it came off. 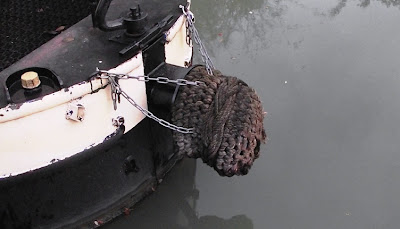 The varnishing saga is continuing apace; Dave has started on the internal window frames now. We’ve ordered an 18” porthole for the kitchen, that’s been on the list from day one. It’s turned up at Kim and Luke’s and we’ll pick it up next Tuesday when we go to the Quiz Night. Which we nearly won last week, by the way. Not so thick after all!

This is what the Napton Flight looks like without any water. 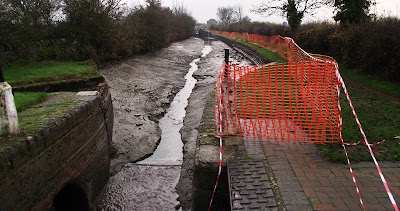 The whole flight of 8 locks is closed while BW put in 2 new gates, a new balance beam and carry out general repairs. They’ve been draining and re-filling various bits and it’s very interesting to see what goes on under the surface. Here's a view of a lock paddle that you never usually see. 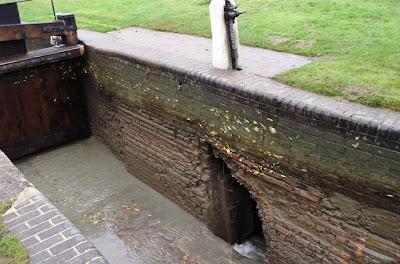 Note the new lock gate. It'll be nice when it's painted.
﻿
We had a day of mixed emotion last Monday; we attended the funeral of one of Ann-Marie’s former work colleagues. Helen was well known in the tight knit farming community in South Lincolnshire and the little church was overflowing with relatives, friends and co-workers. Afterwards, at the reception, was the first time we’d seen anyone from the farm since we sold the house, so although it was a sad occasion, it was lovely to catch up, however briefly, with people who were part of our lives when we lived there. We came away feeling ashamed that it took a funeral to get us back in touch. Such is the way of things; Dave used to say that his relatives only ever saw him when he was wearing a suit. Our main reason for taking our chosen path is to spend more time with the people who are important to us. We must make more of an effort.
at November 24, 2011