France was a hoot! There were over 7,000 cars at the meeting with all the associated chaos that you’d expect. On Sunday we moved Legend down to the 48hr moorings opposite Cropredy Coal Wharf so it was easy for Dad and the kids to come on board and get settled in. We did a final run-through of all the systems then, as there are only 4 beds in the boat, went and slept in Poubelle in the car park. On Monday we came back to the boat and crewed while Dad steered through Cropredy and, after finding a wasp’s nest in the bank at the first place we tried, hastily moved on a bit and pinned on the 14 day moorings. That way they were only a short walk from their car and could either stay put for a week or go further down the cut towards Banbury. At about 11am we said goodbye to our family and our home and headed off to Dover, Dunkerque and beyond.

Reversing the route we’d taken in Ken when we left France in December, we stopped for the night in a picnic area near Rouen, then on Tuesday had an early start and got to Salbris - which is about 50kms south of Orleans - around lunch time.

We finally got into the meeting site at 8.30pm; everyone who was there has got horror stories about the queuing, and by the sound of things we were quite lucky. We went through the gate just after they opened the overflow field and got a very nice pitch, albeit a half hour walk from the main event. Once Poubelle was in she stayed put till Sunday; the little town was pretty well grid-locked most of the week.

7,000 2CVs. If you say it quick enough you can almost get away with it. The site was vast; we walked round for 5 days and still didn’t see half of them.

You’ve got to hand it to the French though; we trebled the population of Salbris for a week but the Super-U next door to the site never ran out of bread, milk, beer, or anything else for that matter, including frozen 2L water bottles for your cool box. There was a baker on site, plenty of food stalls, kid’s entertainment all day long, a very well presented Deux Chevaux museum - including several early prototypes and the last cars off the French and Portuguese production lines - and more spare part sellers than you could shake a starting handle at. And of course the cars were amazing; the effort people put in and the lengths they’ll go to for both authenticity and individuality is astounding. 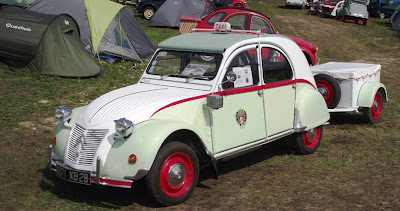 On top of it all the sun shone and by Sunday we were well fed, well tanned and well knackered from all the walking.

Despite planning to leave just after lunch on Sunday, we finally pulled out at 9.30pm. No queues this time, just us not wanting to leave. And it was Tristan’s birthday tea and it would have been rude to go without having cake.

We got back to the picnic site at Rouen at 2am, had 4 hours kip then shot back for the ferry. We were back on Legend at tea-time on Monday. Perfik.

While we were away our relief crew had been having fun; they’d been into Banbury, turned, come back up to Cropredy, washed and re-filled then carried on up through the locks to the winding hole near Claydon where they turned again before coming back down to Broadmoor lock, which is where they were when we came back. And we’re still here. It’s a lovely spot and round here this close to Cropredy Festival is not a good time for trying to find somewhere else to moor. By the way, if anyone would like to come and visit us while the festival is on (or at any other time, of course!) we’d love to see you; we’re only a mile north of it.

In the week since we got back our mates John and Jac have moored up behind us again. Not happy enough with their lovely new engine, they’ve now got big plans for new windows and paint job. Some people just don’t know when to stop.

Dave’s been taking the flooring up at both ends. Just before we bought Legend, on the advice of a surveyor, it had an 8’ long plate welded to the edge of the base opposite the bathroom. This was because an ultra-sound scan showed the steel in that area to be unacceptably thin. The culprit was thought to be corrosion from the inside, but as the floor doesn’t have inspection hatches it was never investigated. That and the lean to the port side have been niggling at us since we bought it, so it’s now got a 2’ wide removable floor section under the new step across the whole front of the saloon where easy ballast trimming can be carried out. Also, there is significantly less rust, 4 fewer paving slabs, and a healthy dose of Waxoyl under the floor from the kitchen to the back down the port side corridor where the over-plating is. 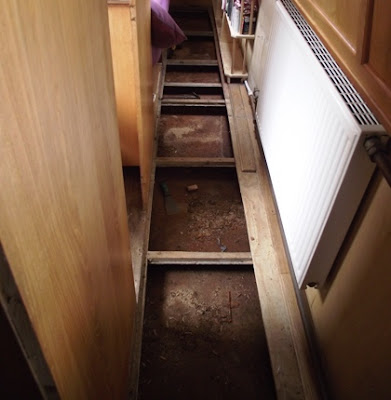 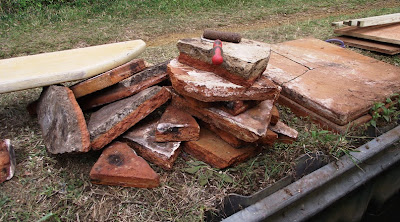 It now sits level in the water without 4 scrap batteries and a 56lb weight in the corner of the well deck. Although there was a lot of rust under the floor at the back and evidence of an inch or so of water at some time, it’s now completely dry, so whatever caused the leak has been fixed. Finding it dry was good, we know we’ve still got to get to the rest of the floor under the bathroom and the bed and do the same thing, but there’s no urgent rush now. At sometime we’re going to re-fit the bathroom – lower the bath and re-tile – and we’ll probably do the whole lot in one go. The ballast that went back in is sitting on lengths of twin-&-earth cable; cheap, inert and keeps the slabs from direct contact with the steel. 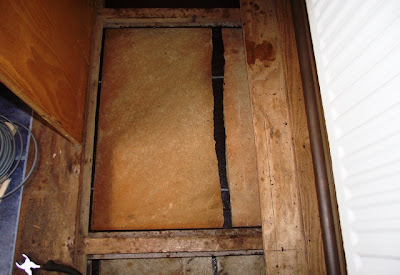 While Dave had the floor out we got another little sneak into Legend’s chequered past. There are the remains of engine mounts under the floor under the bed. That would explain the side hatch being where it is; it once had a forward engine and probably a boatmans cabin where the engine room now is. Curiouser and curiouser, although it’s now powered by an air-cooled Lister, there are two redundant skin tanks (boat radiators) on either side of the stern. All this points to 3 significantly different engines in 20 years. Hmmm, much chin stroking.

Ann-Marie has finished the saloon curtains and they look beautiful. 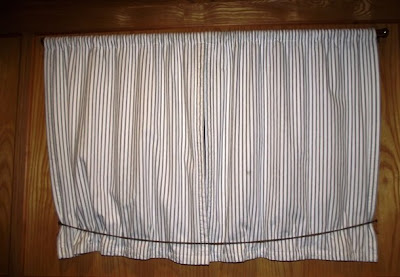 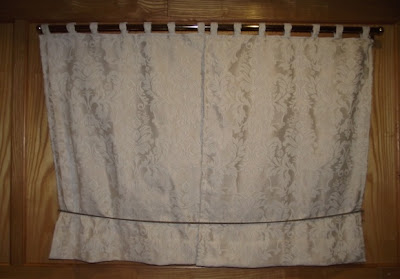 She’s now started on the bedroom ones and Dave is using the old army pillow-case ones to clean the Waxoyl off everything.

We’ve bought a new car! Well, obviously not brand new. A red Fiat Punto, nicely un-remarkable and un-noticeable. We’ll be a lot happier leaving it in lay-bys and car parks than we have been with Poubelle, who we’ve sold to a friend of ours in the club. It’s going to be the first time in twenty odd years that one or the other (mostly both) of us hasn’t had a 2CV based car and there is no doubt that we’ll miss her. Why can’t we keep her? Here on the Oxford it’s very pleasant and gentle and if that’s all we were doing it would be OK, but our plans are for the whole system which will take us to places where, sooner or later, Poubelle would be a target. A non-descript run-of-the-mill eurobox can sit on the curb side somewhere for a few days without attracting attention, and even if it does get damaged it won’t be the end of the world. We’ve been over it no end of times and we always come to the same conclusion. Bye-bye Poubelle, it’s been wonderful. 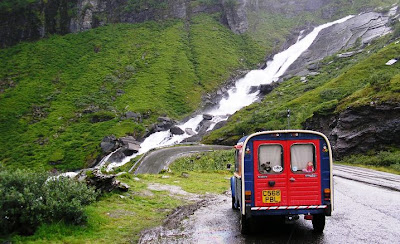