We're not getting excited. Oh no. Not us. Nope.
We had two viewings this week. One was by a couple looking on behalf of their son who has at least two VW campers and needs somewhere to put them, and the other people drove all the way from the Isle of Wight to see our house! They all made all the right noises and the VW bloke is coming on Friday to look for himself. Time will tell, we’ve been here before.


Dave’ sister Anne is the family historian and has researched and produced a very thorough family tree. After reading last weeks entry she emailed to tell us that Dave’s (and hers – obviously) Great Great Grandfather used to be the miller at Tucks Mill near Upton-upon-Severn where we were last weekend. Anne has been to see it and took some photos. 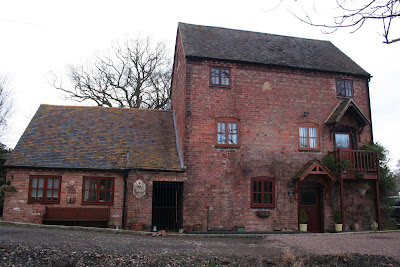 The mill-wheel ironwork is still intact. 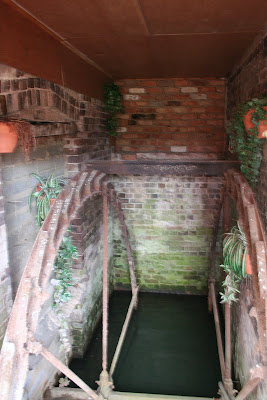 She said it was very strange to know that she was standing in exactly the same spot as William Wood, who begat Alfred, who begat Charlie, who begat Mary, who begat Anne. It's an odd feeling to know that 150 or so years ago on a May Day, he may well have stood in the same streets where we were, watching the same dances we were dancing, then drinking in the same pubs afterwards. We wish now that we’d paid better attention; we could have gone and had a look at the mill. Never mind, it’s only a bike ride from the river, and we will be back!
We had a practice session on Saturday at Bourne – great fun, loads of lovely food and a good time in the pub afterwards. We’re learning a dance called Worcester Monkey. It’s a lively and fast dance, which a lot of other morris sides know and can be done by lots of people at once. Bourne Borderers joined in with it at Upton and thought it would be good to know it properly for the next festival we go to.
On Sunday we weeded the veg beds – again. Then we went out and spent £30 on plants. We know that sounds a lot of money to go chucking at a house that’s for sale, but the veg plot was a weedy mess and we were slightly ashamed of it. Once all the weeds had gone it looked an awful lot better but very bare. Now you expect Tom Goode to come marching through the archway with a piglet under his arm. 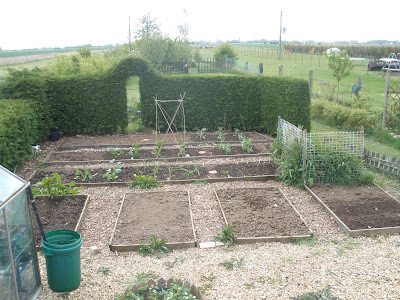 Unfortunately Jack Frost has been about already, I know, naer cast a clout and all that, the beans and courgettes are looking very sorry for themselves now. I know all about hardening off, just too impetuous to do it!